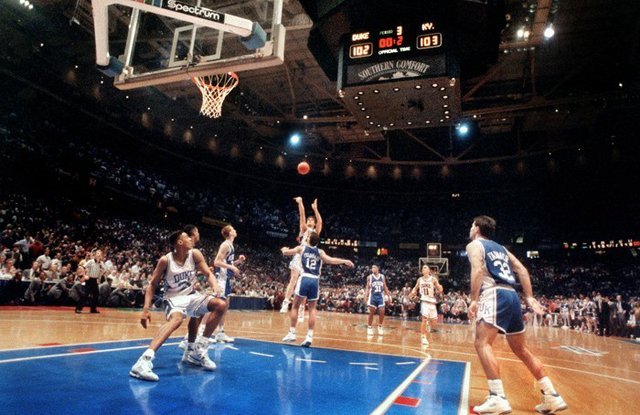 Arguably the greatest college basketball ever played turned 28 this past Friday. Kentucky vs Duke in the Elite 8 matchup back in 1992.

Woods played among the “unforgettables” who stayed withe the Wildcats for four years despite two postseasons lost to NCAA sanctions. In their return, only Coach K’s Blue Devils stood in their way of the Final Four.

Hurley remembered never being able to build a big enough lead. Woods and he had never talked about the game at length until now. Despite the devastating ending, Grant Hill’s full court bullet pass to Christian Laettner for the game-winner, Woods defended his coach.

“We never questioned Coach Pitino. To this day I still don’t question it. Because the chances of one guy catching a length-of-the-court pass over two defenders is not very great, but it happened on this night.”

Woods added praise for Laettner, who he needed to constantly berate and thought was a hard opponent to guard than Shaquille O’Neal. Woods’ trash talk bounced right off Laettner, which made it feel harder to guard him than a young Shaq, who was playing at LSU at the time.

“We didn’t want to foul,” Woods said of The Shot. “It was probably the easiest shot (Christian) had taken all night.”

Rick Pitino laid the groundwork at Kentucky, during which Coach Cal was beginning his work at UMass toward major college coaching after he took them to the Final Four later in the decade. Kentucky wasn’t on his radar before 1992, Woods said. That game made it Cal’s dream job.

“Duke became a juggernaut from a history standpoint and a program standpoint. I think it was fate,” he said. “It was fate for us, would we have been any more famous if we had won the national championship? … But the Kentucky program of today started March. 28, 1992.”

Cal joined Kentucky in 2009 coaching future NBA stars from John Wall and Demarcus Cousins to Anthony Davis and Karl-Anthony Towns. Kentucky doesn’t always win it all, but since the 1990s, they’ve gotten the best talent. Woods and company had to grit through the down years to reach the top.

Duke’s hosted the likes of Jayson Tatum, Brandon Ingram, Marvin Bagley and Jabari Parker in recent seasons. Christian Laettner became synonymous with the program and the vitriol it received nationally.

Hurley still remembers Woods’ shot that forced Laettner’s game-winner and the energy that he forced him to play with all night. “Hell of a shot.”

Later in the show, Hurley discussed the dynamic he and Laettner shared as teammates — Jeff trying to get their tensest moment out of them.