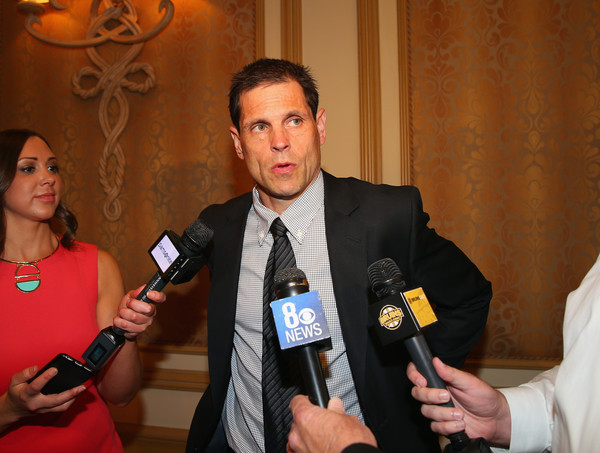 Unlike what was speculated, the Bruins (virtual) experience at the 2020 NHL Draft was lacking in fireworks. The only trade they made was with the Maple Leafs when they swapped seventh-round picks — the Bruins got the Leafs’ 2021 seventh-rounder and Toronto got Boston’s this year.

The Bruins had zero picks on Day 1 and four picks on Day 2. They were without a first-round pick because that went to the Ducks for Ondrej Kase, and they were also without their fourth-round pick which went to the Devils for Marcus Johansson at the 2019 trade deadline.

The Bruins surprised everyone with this pick, given Mason Lohrei was ranked 132nd by NHL central scouting and projected to go somewhere in the fifth round. NHL Network clearly wasn’t prepared for the pick either, as they pronounced his name wrong and didn’t have any graphics available when Lohrei’s name was called.

Despite all that, Lohrei appears to be a solid pickup for the Bruins. The 6’4”, 200-poind defenseman ranked second in points on his Green Bay Gamblers (USHL) squad with 37 last season. That’s a very encouraging number for a d-man.

Here’s what draft analyst Steve Kournianos had to say about Lohrei.

“Lohrei plays like a seasoned veteran with ice water in his veins,” he said. “He is incredibly poised with the puck, but he also knows how to exploit the aggressiveness of checkers. While most defensemen look to get rid of the puck any the first sign of pressure, Lohrei seems quite comfortable in not only handling the puck, but luring opponents towards him for the sole purpose of drawing them out of position.”

The Bruins must’ve also noticed those things given their communication with Lohrei before Wednesday.

“I had really good conversations with a bunch of different guys,” Lohrei said of his connection with the Bruins. “I had probably a 35, 40-minute phone call with Mr. Sweeney at one point this summer. A lot of good things. I had a good feeling. I was confident but you never know what is going to happen in the draft. Obviously, a dream come true to get picked to the Boston Bruins, an original six organization. It’s kind of just surreal right now.”

The reason the grade is so low is because it appears as if the Bruins could’ve used a later draft pick on Lohrei. Maybe the third-round choice, maybe the fifth-round choice. Either way, the Bruins probably could’ve scooped up the d-man much later.

He plans to attend The Ohio State University next fall.

Death, taxes and the Bruins drafting, trading or signing a player who’s either from Massachusetts or goes to school in Boston. In this case, it’s the second option.

Trevor Kuntar is currently a freshman at Boston College. Last season saw him lead the Youngstown Phantoms (USHL) in points with 53.

Like Lohrei, Kuntar also went a lot higher than expected, although NHL Network was much more prepared for this selection. Kuntar was ranked 143rd among all North American skaters by NHL central scouting, projecting to go somewhere around the fifth round.

At about 6’0” and 197 pounds, Kuntar seems like a very prototypical Bruin.

“Kuntar plays a hard-nosed style and throws his weight around no matter the situation, but he also finished as one of the league’s top power-play specialists (9 goals, 12 assists) and drove Youngstown’s top line by a significant margin,” Kournianos wrote in his scouting report. “A strong, well-balanced skater with inside-out moves, Kuntar’s ability to rip a devastating wrister off the rush can force defenders to play him too close and open the door for a gear shift and explosion into the middle.”

One similarity between Lohrei and Kuntar: both were passed over last season as first-year draft-eligible.

“It was definitely super motivating,” Kuntar said of not being drafted last season. “I’ll never forget that day for the rest of my life. I thought about that day every day and that’s one of the things that motivated me to keep pushing and keep going.”

Mason Langenbrunner already has some roots with the Bruins. Jamie, his father, is currently the player development coordinator for the Bruins.

Out of the first three draft selections by the Bruins, Langenbrunner scored the highest ranking by NHL central scouting, coming in at No. 131. Langenbrunner is extremely young, as he’s a September of 2002 birthday.

Last year for Eden Prairie high school in Minnesota, Langenbrunner had 21 points in 31 games, which are solid numbers for a d-man. He’s got the height, standing 6’2”. He certainly needs to put on a bit more weight since he comes in at 166 pounds. He’ll certainly have ample time to do that.

He’s known to be very creative offensively and great at jumping up in the rush and creating offense.

Here’s what Kournianos had to say about Langenbrunner.

“Langenbrunner has very good speed for a defender his size and displays quickness and mobility in all three zone,” he said. “Although he doesn’t come across as a pure puck distributor or power-play quarterback, Langenbrunner’s footwork allows him to walk the line or sidestep pressure in order for a shooting lane to open up. He also has very soft hands.”

Given his young age, Langenbrunner will be a long-term project for the Bruins. He’s set to begin playing at Harvard next fall.

The Bruins currently have the towns of Walpole, Weymouth and Charlestown represented on their roster. With the drafting of Riley Duran, they now have Woburn covered, too.

Duran put up 44 points in 27 games for Lawrence Academy last season. He actually ranks the highest out of all North American skaters in NHL’s central scouting, coming in at No. 95.

He’s a 6’1”, 174-pound forward who can play both center and wing. Kournianos included this excerpt in Duran’s scouting report.

“Duran took a significant leap forward this year by making himself a more well-rounded forward and living up to the label as a top high school recruit,” he said. “Some view him as a power forward, but it is probably more for an intimidation factor via top-end speed and a powerful stride as opposed to him being a masher or crease crasher. In other words, Duran bombing up ice at top speed forces defenders to back off, thus allowing him to dictate zone time on his own terms.”

Duran is to play for the Youngstown Phantoms (USHL) this fall and then head to Providence College in the fall of 2021.

The Most Important Things to Watch For in Bruins Training Camp

How Does Boston Feel About the Bruins?