Boston Bruins Ranked Among Top NHL Teams of the Future 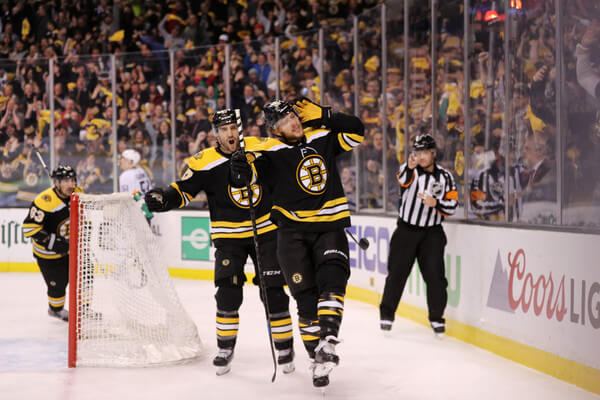 If the hockey writers over at The Athletic know the future, the Boston Bruins should be very happy.

To help kick off their new “Future of the Game” package, Craig Custance, along with hockey scribes Corey Pronman, Eric Duhatschek, Scott Burnside, Katie Strang, Scott Wheeler, Dom Luszczyszyn and Justin Bourne, voted on and ranked the best teams in the 2021-22 hockey season.

For some background info, each team was ranked off of four categories: young core (U25) and prospects, management and coaching, ownership and market, and salary cap situation. Each panelist was asked to rank each category for each team on a 1-10 scale and then each categories’ scores were averaged out.

According to Custance, because most success hinges on young talent and prospects, that category was counted twice to get the team’s final rating.

Complicated, I know. But I do have to admit: it was legitimately interesting.

The Bruins were ranked fourth overall at a 7.6. The breakdown of their categories are as follows.

In the explanation for such rankings, The Athletic pointed to the Bruins’ ability to win a Stanley Cup and then quickly retool themselves for the next several years. They write that despite not having the caliber of young talent that the other three teams ranked above them have, an improving salary cap situation as well as solid young players will keep Boston as a Cup contender.

Even though Bruins fans and media alike complain about the contracts of David Krejci, David Backes and Tuukka Rask, all will be off the books after the 2020-21 season.

With those three gone, what will fans and media complain about then? Luckily we have three years to find something else to gripe about and I have no doubts we’ll pinpoint it.

Scott Burnside got his own paragraph on the Bruins and said that what impresses him most is the staying power the team has in a sports-saturated market with the Patriots, Celtics and Red Sox. He likes their ability to stay relevant through thick and thin.

There’s no doubt that the Bruins are the fourth team in town, but ultimately Burnside is right. There’s a diehard fanbase that keeps the B’s afloat. Even if some fans don’t vote the Bruins as their favorite of the four Boston juggernauts, they still follow, watch, read about and root for the boys in black and gold.

Each ranking the hockey braintrust at The Athletic gave the future Bruins is in the right ballpark.

The Bruins have a really solid young core and slew of prospects who, come 2021-22, will be established NHL talent. Despite some bonehead moves in the past, the new Sweeney-Cassidy administration seems to be in the right state of mind and trending with the direction of the “new” NHL. The Boston market is a saturated place. And finally, barring any bad contracts given out over the next few years, their salary cap situation will resemble paradise.

What doesn’t resemble paradise is the amount of Atlantic Division teams also in the top-5.

Since I’m not going to copy and paste everything said about those teams, I’m instead going to give you a 40%-off discount link for a membership to The Athletic so you can read the piece. Not only are the power rankings really interesting, but the website itself is quickly becoming my favorite sports section.

The stories are actual stories. Not articles. Stories.

Click this link to get 40% off a subscription to The Athletic and access to these rankings AS WELL AS everything else the site has to offer.

The bottom line is that the Bruins have a really bright future ahead of them. But so do many other teams in the Atlantic.