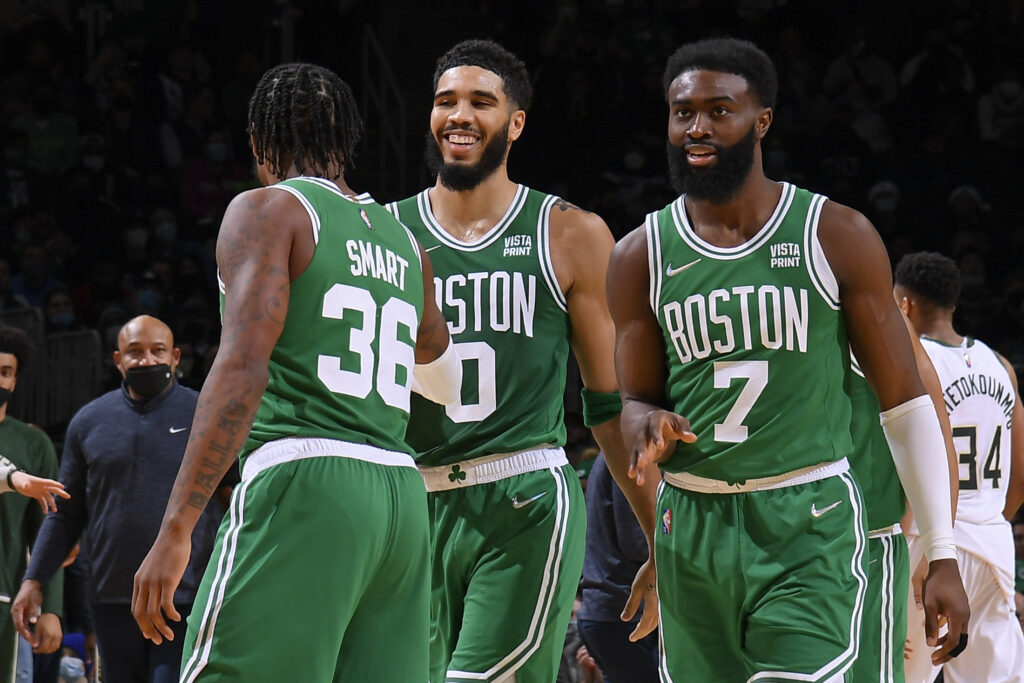 BOSTON, MA - DECEMBER 13: Jayson Tatum #0 of the Boston Celtics, Marcus Smart #36 of the Boston Celtics, and Jaylen Brown #7 of the Boston Celtics celebrate against the Milwaukee Bucks on December 13, 2021 at the TD Garden in Boston, Massachusetts. NOTE TO USER: User expressly acknowledges and agrees that, by downloading and or using this photograph, User is consenting to the terms and conditions of the Getty Images License Agreement. Mandatory Copyright Notice: Copyright 2021 NBAE (Photo by Brian Babineau/NBAE via Getty Images)
Share
Facebook Twitter Email

Just a couple of months ago, a lot of people considered this season to be over for the Boston Celtics. They were hovering around .500 and had shown no signs of getting above that mark. Then 2022 came around.

The Celtics are 19-7 in 2022 and 10-1 in their last 11 games. With the recent surge, some have begun to question what the true ceiling of this team is? Could they end up surprising most of those fans who had given up on the season?

On the latest edition of the Celtics Beat podcast on CLNS Media, Adam Kaufman posed an important question to Celtics legend Cedric Maxwell – is this level of play sustainable? Maxwell pointed toward Boston’s bread and butter for his answer.

“Defense is always sustainable. Because it’s about effort. And if you give that maximum effort, then you’re going to get those maximum results.”

In 2022, Boston has posted the best defensive rating in the NBA (100.9), with the next-best team being a full four points behind them. They’ve only allowed 98.1 points per game over that same time span.

On the flip side, the C’s have continued to struggle shooting the ball. Maxwell stressed the importance of emphasizing defense over shot-making.

Boston’s loss to Detroit snapped their nine-game win streak. It also marked the first time the Celtics have given up over 100 points in a game since January 19.

While Maxwell pointed toward the Detroit game as a poor example, he simultaneously looked at the game against the Philadelphia 76ers as the quintessential example of how the C’s should be playing.

“Most games you’ve seen in the last couple of weeks, they’ve defended at such an extraordinary pace that the other team never really even had a chance. You think about the Philadelphia game, Philly was down 20 before you could blink your eye… The Celtics have been ahead with most teams this year, especially during this refound energy of just playing the game at a very high, consistent level.”

And as Maxwell explained his thoughts on the sustainability of Boston’s recent improvements, Kaufman had one more important question to ask – what is this team’s ceiling? According to Maxwell, that answer is the Conference Finals.

“I still think they have a lot of growth. From their coaches, to the players, to everybody around. Their ceiling for me, I said if they can get to the Conference Finals, I think that would be the gem of gems. And then kind of build from there.”