The Boston Celtics won their first title of the Larry Bird era in 1981. This series recounts the road to the NBA Finals.

Over the course of the Boston Celtics 35 year history, to this point, they had won nearly 50% of all championships won in league history.

Needless to say, the Celtics in the NBA Finals in springtime had become a perennial event. An expectation, not a random occurrence.

By 1981 however, the dynasty seasons were becoming a distant memory. Long gone were the cigar smoke filled sidelines of 8 consecutive titles. Russell, Cousy, Cowens, Heinsohn and Havlicek were no longer running the parquet floor. From 1976 to 1979, the Celtics were irrelevant and the rest of the nba seemed to revel in the unfamiliar pain of losing in Boston.

In fall of 1979, The sun finally came out in Boston again with the arrival of a new head coach, a new point guard and the savior of the franchise, Larry Joe Bird.

By the time Houston and Boston advanced to the NBA finals both were underdogs in their respective conference finals. Although Boston had won 62 games, the Philadelphia 76ers eliminated them a year earlier, having had gone down 3-1, losing in 5 games.

The NBA in 1981 was certainly a Cinderella season.

The winner of the ‘81 nba finals was sure to be the next champion of the nba.

Surely it was the celtics express wish to dethrone the Lakers of their 1980 championship but the Houston Rockets had other plans. Boston would find out just how much of a feisty opponent the 40 win Rockets would be.

But first, the NBA east were prepared for these Celtics but the Chicago Bulls and Artis Gilmore presented a formidable semi finals foe.

Gilmore was still mobile, agile and a tank in the paint.

The Celtics titanic front line of Parish, Bird, Maxwell and McHale were on a mission to derail the A. Train.

They’d do just that in a resounding sweep.

On the other side of the bracket, destiny was starting to take form. The Philadelphia 76ers closed out the Milwaukee Bucks and it was on to the second stanza of a three-part mega drama between the Sixers and Celtics in the first 3s seasons  of the decade.

The first four games were exactly what fans expected. An all out brawl. A battle for supremacy among 2 equally talented clubs. But the Sixers stole game 1 at Boston Garden. They took full advantage of a struggling Larry Bird and added separation in game 4, going up 3-1 again.

The Celtics refused to die young to the 76ers this year however. They stole game 5 in Boston and looked to tie the series at the spectrum, an arena they’d lost 11 consecutive games in.

The stage was set for game 6. Widely considered one of the greatest games in playoff history. It’s was a heavy weight bout that included players, referees, stuck Basketball, window washing and fighting fans. Celtics basketball as they bust out to a 17 point lead.

The celtics duo of Larry Bird and longest tenured Celtic, veteran forward Cedric Maxwell kept Philadelphia at a distance. And in the closing minutes, rookie Andrew Toney, had his layup reversed by the giant arms of rookie Kevin McHale – Toney hadn’t become “the Boston Strangler” just yet.

But it was Bird’s 26 and 16 that made all the difference and it was back home at the hallowed halls of Boston Garden, a place that had seen its fair share of game 7’s…

A Fantastic feat for Boston, just the 2nd team in nba history to force game 7 after going down 3-1.  History, and the ghosts of celtics past were on their side in 1981.

Boston would do the improbable. Behind the efforts of Cedric Maxwell and Larry Bird, the Celtics would force game 7.

The Celtics have never lost a game 7 to the 76ers and while the success of decades past will likely never be paralleled by the green, the mystique felt present again… 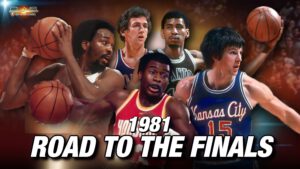 Maxwell continued to prove his worth in the clutch, a place his Celtics would need him to be.

Cornbread Maxwell and a young Larry Bird, the leagues most lethal Front court duo would again will their team to victory…

Now, all focus was dead ahead on capturing banner 14 & tipping off a new decade that would find Auerbach’s Celtics back in dominance.

These cinderella celtics had Philadelphia reeling and victory was in their sites.

Look back at part 1 of 3 part series here.