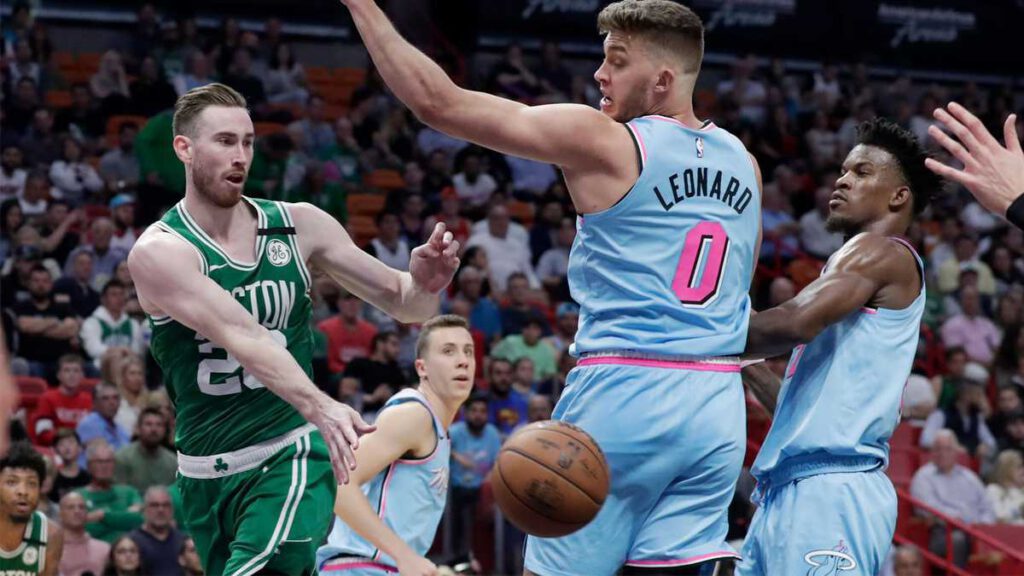 Jaylen Brown and Jayson Tatum’s bashing of the Detroit Pistons five days before Christmas stands as a marquee moment this season. Detroit later got revenge, sparking this recent skid where Brown and Tatum largely traded time off the floor. Back then, the two comfortably shared shots to combine for 52 points.

After Tatum scored nine straight, Detroit switched to a zone with four defenders wide and Andre Drummond playing the middle. Brown lit it up, first navigating to the corner and hitting a three, then up-faking past Drummond at the top of the arc to hit a floater. Detroit quickly abandoned the zone.

The NBA tried to do the same, by instituting the illegal defense rule in 1983-84 then defensive three-seconds in 2002-03. The Heat and Nets revived it, using a matchup-based approach rather than the traditional zone that plants the center inside. They use it roughly once every 10 possessions stretching back to last season. So when Boston took a trip to Miami this week, it meant studying extra film to tailor its offense to the zone it’d surely face.

“We spent more time on zone offense than ever before in training camp,” Brad Stevens said at shootaround on Thursday. “We thought this was the year it’d start to take off.”

And it has. Marc Stein profiled the return of the zone in the New York Times this month. In it, he referenced zone possessions rising 50% through Jan. 17 compared to the 2018-19 season. Last year already witnessed as a massive increase over the prior year, thanks to Eric Spoelstra and Kenny Atkinson.

Nick Nurse, Scott Brooks, Doc Rivers and even Stevens himself sprinkle it in through various methods. It’s hard to wrap them under one umbrella term, because they’re largely new approaches to addressing a massive offensive uptick.

The Celtics tried to stop Devin Booker earlier this month with a box-and-one. Stevens tried a triangle box-and-one against Kyrie Irving and LeBron James in 2015. The Raptors play box-and-one too, alongside the 2-3, whereas the Clippers switch across the floor in a zone-like fashion. Most teams use it for 4-8% of their defensive possessions.

“The old theory would be that the zone’s going to give up those (threes). Now I think it’s the way you can stay in your general areas and challenge shooters,” Stevens said. “I understand why people are playing more of it.”

If anything, teams gain a second look from offenses when they switch into zone. It thwarts the pick-and-roll and forces more methodical passing by offenses to find space. While NBA offenses feature better shooting, defenses counteract that by shifting to the perimeter zones and using length to reach nearby shooters.

It’s not a catch-all defense. As defenses got switched to death into mismatches, it allowed them to gain back some control.

So the Celtics adjusted, as John Karalis reported, and the team with as much of a threes-and-layups mindset as anyone looked toward the middle of the floor. Kemba Walker and the others prepared through film and looked adept as any team to attack the zone with multiple layers of passing and shooting across their lineups.

In a classic example from Tuesday’s game, Brown played the middle, Gordon Hayward drew the two wing defenders while Marcus Smart and Daniel Theis held Bam Adebayo back on the baseline. That opens the middle of the floor. If Brown receives empty space, he can shoot and bury a two. If the defense collapses on him, he can find an open shooter or cutter.

For defenses defending as many as 50 three-pointers per night, any chance to direct the ball back into the mid-range qualifies as a win. For the Celtics, it could later help solve their matchup issues against the 76ers, who Stein noted face more zones than anyone.