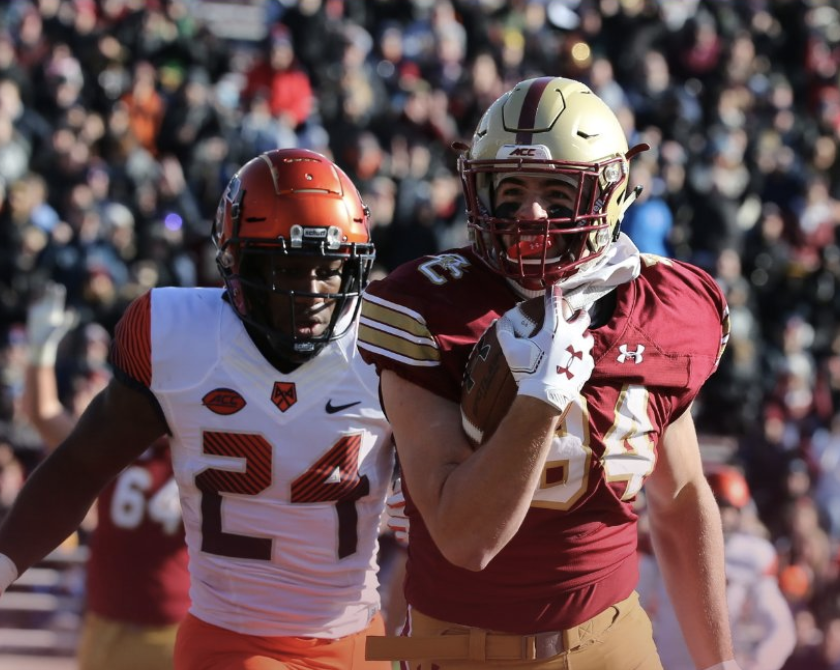 Syracuse quarterback Eric Dungey ran for three touchdowns and threw for three others to lead the No. 19 Orange to a 42-21 win over the Eagles before 34,959 at Alumni Stadium. Dungey finished the regular season with 15 rushing touchdowns, the most of any Division I quarterback in the nation. Meanwhile, it was a disappointing final home appearance for 17 Eagles on Senior Day.

Eagles head coach Steve Addazio finishes the regular season 7-5 overall (4-4 in ACC Atlantic) for the fifth time in his six seasons to date at Boston College. No. 20 Syracuse will head to a bowl with a 9-3 mark, its best season since 2001. The Orange outgained Boston College 563-356.

Addazio lost his star running back A.J. Dillon to a recurring ankle injury to start the second half and his two best defensive players in pass rushers Zach Allen and Wyatt Ray during the game as well. Dungey was able to overcome his upper body injury which put his availability in some doubt coming into the game.

After beating Virginia Tech on the road on Nov. 3, the Eagles were flying high, standing at 7-2, 4-1 in the ACC Atlantic and ranked 17th in the BCS rankings. But since, they lost all three games, with the 27-7 defeat to No. 2 Clemson starting their decline.

With a 7-5 record, Boston College is likely to do no better than a lower level bowl such as the Quick Lane Bowl in Detroit, First-Responder Bowl in Dallas or Independence Bowl in Shreveport, La. Boston College won’t receive its official bid until Dec. 2, shortly after the four BCS playoff teams are announced.

The Eagles opened the game in promising fashion. Behind the rushing of A.J. Dillon and quarterback Anthony Brown, the Eagles marched to the Syracuse 16, with Brown converting a 4th-and-3 with an 11-yard run to the Orange 16. But the drive stalled and Colton Lichtenberg was wide left with a 33-yard field goal attempt.

The Orange, likewise, took their opening drive and drove to the Eagles 26. But Andre Szmyt was wide left on his 44-yard kick and it remained scoreless.

BC had their lone first half hight on the next drive. Starting at their own 26, the Eagles started to exert some will, with Dillon rushing for 17 yards to open the drive. 10 plays and 57 yards later, Brown rolled right and threw back to his left to a wide open Jake Burt in the end zone for a 3-yard score that put BC ahead, 7-0.

Boston College couldn’t stand prosperity, as on the very first Syracuse play from scrimmage, Orange QB Eric Dungey spotted a wide open Sean Riley for a 75-yard touchdown, as there were no Eagle defenders within 15 yards of the Syracuse receiver.

The game would turn on the very next play.

Syracuse kicker Sterling Hofrichter booted to Michael Walker, whose 53-yard return opened the game. Walker took the kick following the Syracuse TD at the BC 10 and raced ahead to the BC 36. He was met there by Hofrichter, who got his helmet on the ball and forced it to the ground. Hofrichter fell on the ball with his helmet and Syracuse recovered. Four plays and 36 yards later, Eric Dungey raced inside the right pylon for the go-ahead score.

Syracuse built their lead to 21-7 when Dungey ran it in from two yards for his second rushing touchdown of the half with 12:40 left in the second quarter.

BC got back within a score when Syracuse returned the favor on a blown coverage, allowing Jeff Smith to race past coverage on a 69-yard score. Both Syracuse safeties pinched close to the line of scrimmage, leaving the deep part of the field uncovered.

But BC’s defense, as it has during its recent three-game skid, looked leaky. Syracuse put together a 75-yard drive on six plays, capped by Dungey’s third rushing touchdown of the first half. BC’s defense was torched for 380 yards of total offense.

The news got worse for the Eagles to open the second half as A.J. Dillon was ruled “unlikely to return” with a recurring ankle injury that has hobbled him for most of the season.

On the very next play after dropping a potential interception on a double pass trick play, Boston College finally got the break they needed to get back within a possession when Taj-Amir Torres picked off Dungey and returned the ball 34 yards to the Syracuse 31. Two plays later, Brown found Ben Glines for a touchdown down the left sideline and it was 28-21 just 1:34 into the second half.

BROWN TO GLINES gets BC within a score again. pic.twitter.com/rgtskCnlIp

But from there, it was Syracuse stamping their imprint on the game. Dungey hit Jamal Custis from 22 yards out over Lukas Denis for a 35-21 lead.

Jamal Custis at 6-5, 213 is a big, strong receiver as he shows here on TD over Lukas Denis pic.twitter.com/7KTMJhGqgH

Then the Orange quarterback dropped a perfect pass in the right corner of the end zone to Taj Harris for a 42-21 lead with 9:07 left in the fourth.