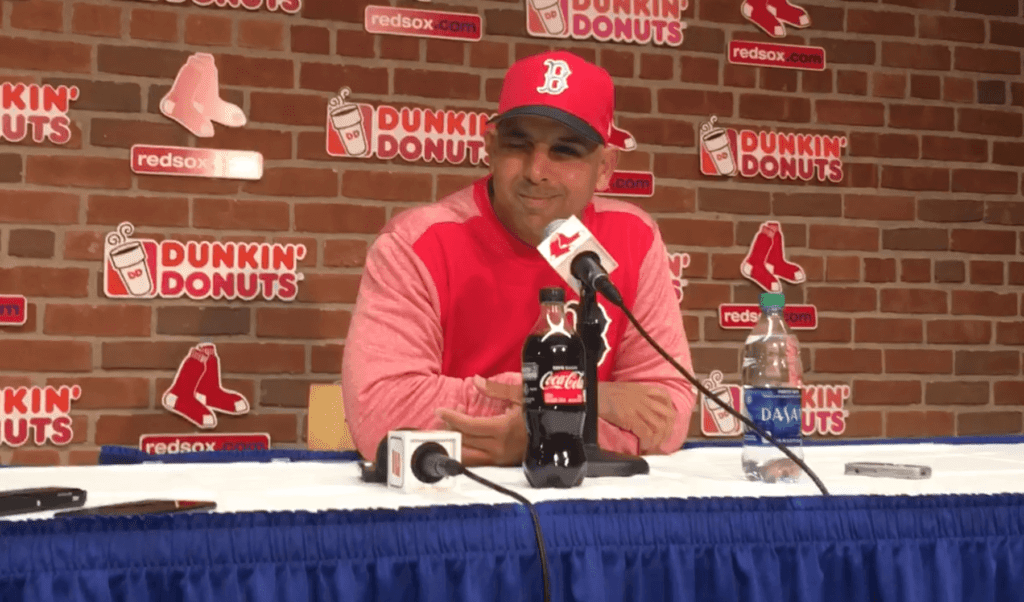 BOSTON — With a wink and nod, Alex Cora showed everyone he was in full command before his first Fenway Park game as manager of the Red Sox.

Cora, in his pregame press conference before Thursday’s icy home opener, was asked about the bitter cold and wind that the welcomed the Red Sox to their first home game of 2018.

“Just prepare. There’s a lot of stuff (in the clubhouse) that can help you out as far as keeping yourself warm,” Cora said. “There’s certain guys, they love to put a lot of layers on and they’re others that don’t. I think hitting-wise is the one thing where it bothers you if it’s windy but now, they’ve got glass (windows in batting tunnel). It’s not as tough as back in the day, honestly.

“You’ve just got to get used to it. We knew we were coming up here before the season started. If they complain about it, I’ll say, ‘Hey man, where we’re shooting to go, it’s going to be cold in October and November. It’s just a rehearsal.'”

A rehearsal. And that gives you exactly the mix of strong mentality, confidence and sense of humor that Dave Dombrowski and Red Sox management saw as the perfect elixir to what they had seen in the last five seasons under John Farrell.

Obviously, Farrell had a great deal of success in Boston, winning a World Series in his first year and becoming the first Red Sox manager ever to win back-to-back A.L. East Division championships.

But clearly, after tensions rose to the surface in and outside the clubhouse during a second consecutive 93-win season last year, the voice had to change.

The voice of Cora has been clear in the first six weeks, through spring training and the opening week of the season. He’s going to steer this ship with a steady hand but never oversteer. There was the feeling among several players during last season that Farrell had become way too rigid and reactionary, as is to be expected with a manager with no contract for the next season. Farrell had many strengths but the feeling was that relating to much of his roster wasn’t at the top of the list.

There is so much baseball left to be played that it seems silly to extrapolate a one-week sample over 162 games and – as Cora clearly alluded to – hopefully in October and November.

He’s got everything under control, even his trips to CVS on opening day in St. Petersburg where he shopped for diapers for his twins. He happily related that story because in his mind, why not? He doesn’t have to be human for the media or the fans but he certainly needs to convey that sense of normalcy to his players. It’s the best was for his players to feel like he sees them as people not millionaire athletes.

That’s probably why in the last week of January several players like Chris Sale were only too happy to board a plane for Puerto Rico to help with Hurricane Maria help in his homeland.

PREP FOR OCTOBER: With a wink of the eye, #RedSox skipper Alex Cora suggests cold weather now could be just “good preparation” for cold weather in October. pic.twitter.com/XsV3vtktOc

He told the story Thursday of his family – including his mother – coming up from Puerto Rico to see his first home game at Fenway.

Before the calendar even reached April, managers all across baseball found the seat Cora holds in Boston remarkably hot.

In a notoriously hot seat, Yankee rookie skipper Aaron Boone watch as his much-heralded bullpen had an ERA above 6.50 and half of his lineup was hitting below .200, including catcher Gary Sanchez.

Brian Snitker was rumored by The Athletic’s Jim Bowden to be one of the first in the firing line of Braves general manager First-year general manager Alex Anthopoulos, who inherited Snitker when he took over the Braves and certainly respects his baseball mind, work ethic and ability to develop young players.

However, Bowden writes, “it’s only a matter of time before Anthopoulos will want to put his own manager in the seat, preferably someone he views as a long-term solution. The Braves hope several of their top pitching prospects will be arriving by August. Having the right manager in place to finish the season will be imperative if they’re going to contend in 2019 as planned.”

“And then we’ll be 5-1 when we get to Fenway!” pic.twitter.com/MSgSHUBDsM

The irony of this is that it was Bowden who fired Tony Perez after just 44 games in 1993 and replaced him with Davey Johnson.

Speaking of the Reds, there’s Bryan Price. He has been assigned the duty of trying to manage a team that is trying to compete in 2019 and following the plan of the Cubs and Astros in roster building. That’s almost a no-win situation for a manager, especially with Barry Larkin in waiting to replace him.

And then there’s Gabe Kapler. No manager in modern history had as bad of a start from a PR perspective as Kapler did in Philadelphia. Kapler brought his analytics to a street-smart sport town and it has backfired terribly in the first two weeks, replacing a starting pitcher (Aaron Nola) after five innings and 68 pitches in a three-hit shutout, calling upon a reliever whom he didn’t know wasn’t warming in the bullpen, benching his left-handed No. 3 hitter against a right-handed starter who struggles against lefty batters and using a position player to pitch just three games into a season on a team with nine relievers.

It’s no wonder Kapler was booed off the Citizens Bank Park field during introductions and pitching changes on Thursday in the City of Brotherly Love and two parades in three months.

Contrast that with the rousing ovation Cora received as he was introduced for the first time on Thursday.

Obviously, Cora’s first test won’t come until he and his team face real adversity. Cora’s first nine games come against the Rays (7) and the Marlins (2) and he’s 6-1.

Adversity is mettle maker of Boston coaches. It’s the kind of adversity that Bill Belichick has thrived under for 18 seasons and Brad Stevens and Bruce Cassidy have brilliantly handled this winter. On a roster that is the highest paid ($235 million) in MLB this year, the urgency to win is certainly there.

What you notice so far about Cora is how mellow he is in handling it. Maybe it’s just as simple as consciously toning it down to take the pressure off his players or maybe that’s just his nature.

It’s been enjoyable watching Cora disarm a hyper-intense environment. If he can manage to keep it up for the next six months, he will indeed get his rehearsal this Fall.