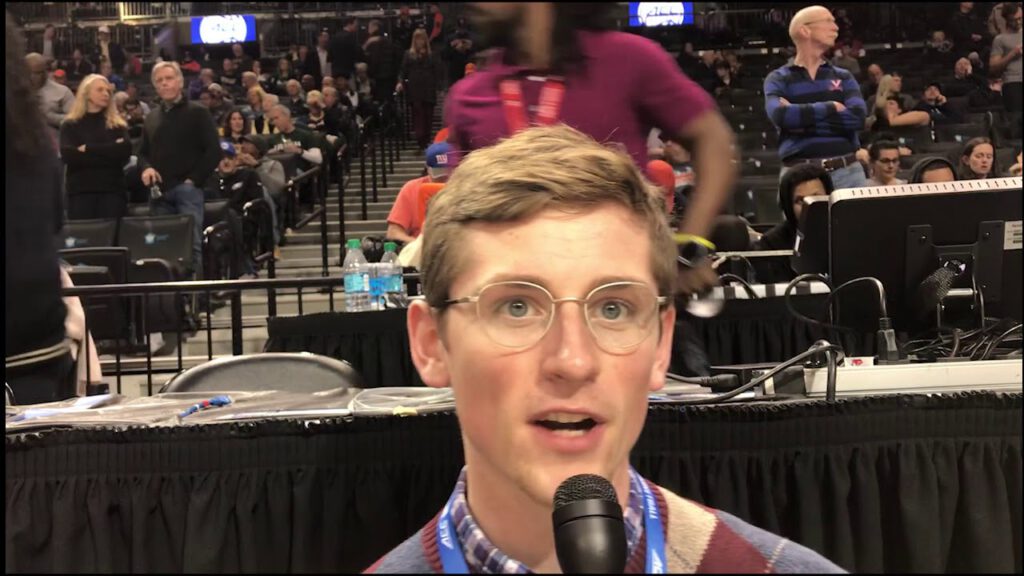 Boston College hadn’t won a game in ACC play, period, only two seasons ago. Jerome Robinson, this year battling Duke’s Marvin Bagley for the league’s scoring title, was there. Ky Bowman arrived and suddenly two North Carolina guards, who had little option to play elsewhere in the conference, have helped put the program in a place to compete with NC’s biggest programs.

They’ll see one of them tomorrow in N.C. State, after they beat Georgia Tech 87-77 on the first day of ACC tournament play.

The Eagle’s success all year centered around Robinson’s high-volume scoring and the team’s 36.7 percent proficiency from three. As Robinson started 3-of-13, and BC nine percent outside, it had to lean on its third layer to succeed: Ky Bowman’s playmaking. They wouldn’t have to go beyond that.

Bowman served a recently-starving BC program its first ACC Tourney victory since 2015 behind 26 points, 10 rebounds and six assists. The Eagles, 8-12 in postseason play since joining the conference, symbolized what could be a turbulence-filled week with the amount of upsets the ACC’s showcased in only the past week, never mind all season.

BC, adept at multiple positions offensively, has pulled off several themselves, and once again looked like a team nobody wants to see this week.

“I thought for 40 minutes, maybe up until the last two minutes, one of our better defensive efforts,” head coach Jim Christian said. “Guys were locked in on the game plan, really making it difficult for them to get to the basket. And then obviously offensively, if we can go 2-for-14 from three and win the game, we played a really good floor game.”

Josh Okogie caught one of Bowman’s early floaters in midair, hit the ground hard and looked back in disbelief as a goaltending call put Boston College ahead 15-9.

The Eagles, losing four-of-five coming in, broke into an efficient string of offense in the first half. Bowman recovered from missing a pass with a transition layup to start the game, then Nik Popovic set a screen for Jerome Robinson to run in transition and dunk.

Yellow Jackets coach John Pastner pleaded to his team from the sideline, reminding them this could be the last game of the season for a program that drove deep in the NIT a year ago. He faced Evan Cole and asked, “are you awake?”

He’d watch his team start 0-of-8 from the field in the first six minutes.

“(It’s a) recipe for disaster to play in the ACC without a true point,” Pastner said. “But that’s what happened when Jose (Alvarado) went down versus Duke. It was kind of like our eighth team during one season trying to adjust with the guys. But they’ve adjusted, and Tadric (Jackson) has done a nice job over the last few weeks running the point. I know that’s not his natural position, but he’s taken a load of it and has handled it well, and we won two great games last week.”

Okogie answered Paster’s call with a three while Moses Wright narrowly missed a put-back dunk to try and respond to hard pick-and-roll sets Bowman ran on their defense. He’d hit Giancarlo Reyes rolling past Ben Lammers, then dribbled around a Popovic screen and hit an elbow jumper to put BC ahead 19-13.

Lammers would shut down the penetration next, cutting off Robinson’s driving angle on the left side and tipping the ball toward the ground out of his fingertips, keeping it in-bounds. But Robinson fired back from that side next possession hitting an 18-footer through the foul with a free throw after. Jordan Chatman followed in the same location for two, boosting BC past Tech’s struggling offense again, 28-19.

Georgia Tech worked the ball to Lammers effectively, finishing 3-of-5 inside and quietly leading all scorers, but on the other end BC’s cuts continued to finish ahead of him. The Eagles worked that, behind five assists from Bowman, into a 10-point halftime advantage.

Robinson, blocked at the buzzer before half before launching up a prayer after checking his back for the clock, devolved to 3-of-12 while Tech dipped to 25 percent shooting through a flurry of misses, fouls and turnovers by bith teams in the early minutes of the second half. Bowman picked him up, pushing BC ahead by 13 with four points in the first four minutes. A minute later he’d add a layup for his 14th points.

Bowman ripped through the defense at his will, five turnovers unable to hamper his impact and finishing at 6-of-8, flying through the paint to spread the ball around or to finish through another foul, another driving left with over 12 minutes to go.

He’d hit eight of the first 10 he attempted.

“Last year this opportunity I had, I wasn’t able to play the second half with my team,” Bowman said. “This year was even a better feeling for me to get out there and play a game with my teammates.”

With each free throw he seemed to further burden a Georgia Tech squad fighting itself on offense, Okogie lost a ball along the sideline and grimaced against pressure from Stephon Mitchell.

Robinson poured in a three off a pass Bowman swung from the paint and then fed Popovic on another cut for a dunk. Up 17, with Robinson supplementing the effort now, the Eagles appeared on their way. But they had to circumvent one last run.

It took until the final minutes for Tadric Jackson to tear open the Yellow Jacket’s offense, hitting a free throw, jumper and layup in succession over two minutes. They pressed in full court, setting Brandon Alston up for a three-point play, a three and then another bucket for Jackson stealing the ball and dunking. Their bench now roaring, GT cut the lead to seven.

But the bonus struck and time ran short, as BC poured in four free throws in response. The Eagles sat comfortable, once again up ten, and bought themselves one more night in Brooklyn.

“Of course you’re going to be down,” Jackson said “It’s not where we wanted to be. To lose the first-round, and could have had a chance to win, it just hurt, just deep down. To sit here and say it’ll be all right, but it’s not, but at the end of the day, you’ve got to just keep moving on with life and just keep getting better.”

Danilo Gallinari Interview: Why He Picked the Boston Celtics

Reaction to Malcolm Brogdon Deal + Should Celtics Trade for Durant?