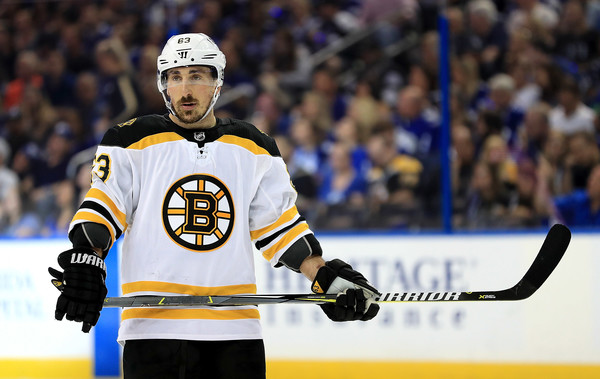 BOSTON – A lot of people were calling Brad Marchand a coward after he refused to drop the gloves with Lars Eller on Thursday night.

The Boston Bruins would use different words to describe Marchand’s actions or lack thereof.

Lars Eller goes after Brad Marchand and tries to fight him. Marchand says no. #ALLCAPS to the penalty kill, #NHLBruins to the power play pic.twitter.com/ueOhuTm8Uv

Marchand knew Eller would look for his revenge at some point. The Washington Capitals forward was out for blood after getting jumped and pummeled by Marchand on opening night back in October.

But with his team down 1-0, Marchand took the high road when Eller tried to get his gloves to drop. Eller spent two minutes in the box and the B’s went on the power play.

No antics, fights, or penalties from the Little Ball of Hate.

It was one of several instances Thursday night where the Capitals tried to settle old scores and get Marchand to bite. Head coach Bruce Cassidy was proud that his star forward did not take the bait.

“Well, there was obviously some leftover residual effect from the previous game, but I think [Marchand] recognized the situation. We’re trying to win a hockey game. You take care of business, as Marchand did, when the game was basically decided last time. So, I thought he did — showed very good discipline. Did what he needed to do for the team to help us get on the power play.”

The Bruins didn’t get the result they’d hoped for on the scoreboard, as they lost to the Capitals for the 14th straight time, this one a 4-2 heartbreaker. But something much more positive became apparent for the black and gold.

Brad Marchand has become a leader for the Bruins and has, at least for now, changed his ways on the ice.

After the Boston Bruins were bounced from the playoffs last season, the call came from above for Brad Marchand to cut out the antics. He’d repeatedly licked Toronto Maple Leafs forward Leo Komarov in the first round and then licked Tampa Bay Lightning forward Ryan Callahan in the second.

He was remorseful in his closing remarks on the team’s breakdown day, saying that he didn’t want to embarrass his teammates and wanted to grow as a person. This all came after GM Don Sweeney and Team President Cam Neely offered him his last chance.

When posed with the question of wanting to be a leader like Patrice Bergeron and Zdeno Chara, Marchand showed a desire to have a similar stature.

“That’s something I’ve wanted to work on for the last few years, to move more into that role,” he said. “I gotta figure some shit out before that’s really going to happen. To get to that next level. I gotta get rid of that stuff.”

Marchand’s history of suspensions and fines are long, spanning all the way back to 2011. As it stands today, he’s been suspended six times and fined five.

But this year has seen a different Marchand.

On December 1st in a game against the Detroit Red Wings, Marchand kept his gloves on when Tyler Bertuzzi wanted to go, prompting the season’s most notorious brawl. The situation? Under three minutes to play in a tied game in the second period.

Earlier this year when Charlie McAvoy was late to team events, it was Marchand who set him straight.

“Somewhat reluctantly, McAvoy confirmed that it was Marchand, a member of the 2011 Cup-winning team and a veteran of 643 regular-season games, who called him out on his behavior,” wrote Kevin Paul Dupont. “Sounding earnest, he said he was appreciative of Marchand setting him straight.”

Again, Marchand taking the initiative and putting the team first.

Marchand’s having a good season on the stat sheet. Though his goal-scoring prowess isn’t as big as in past years (16), points-wise he’s right where he needs to be (47).

After the game, parts of the old Marchand, though subtly, showed themselves when asked about wanting to fight Eller.

“Oh yeah, I mean, I haven’t looked at the stat sheet but I don’t really feel the need to check proof anything,” said Marchand. “He plays you know, maybe 10, 12 minutes a night and I’m playing 20. So in a one-nothing game — to go on a power play, it doesn’t make a lot of sense so that’s the way it is.”

But when posed with what Eller said about him after the scrum, Marchand took the high road.

“Again that’s Lars’ opinion and I will not concern myself at all with his views or his opinions,” said Marchand to WEEI.com. “I’m not even going to engage in this battle because it means absolutely nothing to me. So that’s Lars’ views and he’s entitled to that.”

It’s just another sign of Marchand’s maturity and the Bruins couldn’t be happier.