Brad Marchand on NHL Postponing Games: ‘We’re not being political and that’s not the goal’ 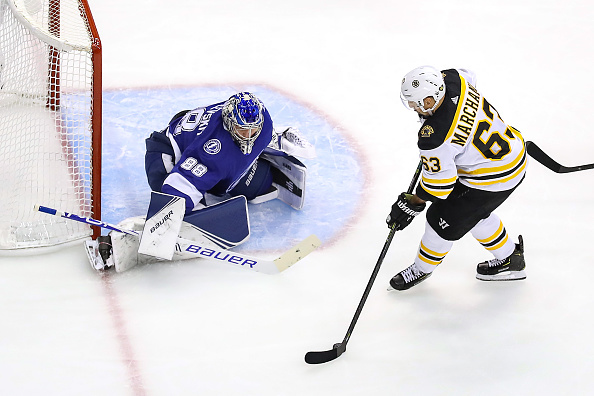 TORONTO, ONTARIO - AUGUST 25: Brad Marchand #63 of the Boston Bruins attempts a shot on Andrei Vasilevskiy #88 of the Tampa Bay Lightning during the second period in Game Two of the Eastern Conference Second Round during the 2020 NHL Stanley Cup Playoffs at Scotiabank Arena on August 25, 2020 in Toronto, Ontario. (Photo by Elsa/Getty Images)
Share
Facebook Twitter Email

As the NHL’s quest for the Stanley Cup comes to a quick halt, the conversation around the league has turned from strategy to win games to strategy for to how to raise awareness for racism and social justice.

It’s a move the Boston Bruins are in full support of.

Patrice Bergeron and Brad Marchand faced the media via Zoom Friday afternoon to discuss their thoughts on what the league is doing to raise awareness.

“It’s about any type of social injustice and racism,” Bergeron said Friday. “Obviously hockey is close to our hearts and right now it’s about supporting our fellow players and be there for them and supporting them. Obviously within the hockey world we definitely want to accomplish some things but then that also means to go broader than that and help society as well and try to bring change.”

All of this by the NHL has come after Jacob Blake was shot at by police officers seven times on Aug. 23, sparking protests throughout the United States and the NBA to cancel their postseason schedule until Saturday. The MLB and WNBA quickly followed suit.

Many have accused the NHL of getting involved in politics and not just playing hockey.

Marchand certainly disagreed with that.

“That’s one thing that people continually mix up is they bring politics into these situations and that’s not what this is about,” he said. “We’re not being political and that’s not the goal and that’s not what we’re here for. There needs to be changes made throughout society and it’s bigger than hockey right now and it’s bigger than sports. It’s about people being equal and being the same and being treated the same. It’s just about making changes. People want to point in different directions and make it about something that it’s not and that’s what we want to avoid.

There’s a large portion of NHL fans, as well as sports fans in general, who believe athletes should stick to sports and keep their noses out of larger societal issues. Many people use sports as an escape from all that.

Marchand gave a solid response to the section of NHL fans in that category.

“Listen, everyone’s entitled to their own opinion but it’s very evident and clear that this is bigger than sports and people need to put that aside,” Marchand said. “Sports is a luxury, it’s a luxury to watch this game and play this game. When it becomes about people’s safety and people’s lives, people feeling comfortable to be in their own skin, it’s much more important than that. I understand people want to watch the games and I understand people want to see this. It’s too bad. We have bigger things that we care about and that we want to do and improve upon and the people that we want to support and that’s what matters.”

The NHL received more criticism for proceeding with postseason games Wednesday night after the NBA and some MLB teams already cancelled their games for the evening. The Bruins lost to the Lightning in Game 3, 7-1, that night, and even in the hours following it, the Bruins were thinking about taking a stand.

That carried over into Thursday.

“It started even after that game,” Bergeron said. “We had some discussions then, went to bed and already had some meetings planned with Tampa Bay early in the morning and it snowballed from there. We met with the Islanders and then Philly joined. It was something that was planned and were looking forward to and some good organic conversations. Making the right decision to support what’s right and at the end of the day, it’s realizing it was great and powerful to see what happened yesterday.

“To see all those four teams battling on the ice for one thing but then we’ve all realized it’s beyond sports right now and it’s about human rights and it’s about supporting our fellow players in this league and it was great to hear from them as well. Ryan Reaves and everyone else in Edmonton, but then also the guys from the Hockey Diversity alliance. To hear from everyone, everyone coming together — I thought it was a very powerful day.”

The conversations continued through Friday and will most likely be at the forefront of the NHL’s agenda throughout the rest of the postseason and into next year. The fact that those talks are happening between teams as they fight one another for the Stanley Cup is something Marchand finds “powerful”.

“I think a great word Bergy used was powerful,” Marchand said. “That’s what is needed, especially in a predominantly white sport, to have everybody come together and want to be part of a solution and continue those conversations. It has to start, it has to continue. That’s something that we set that precedent early on here. We do want to be part of the solution and continue moving forward and be better. This is another opportunity where we need to prove that and we have that opportunity to show that we want to continue to be better and grow our game. The realization that it’s much bigger than where we’re at and we all need to learn a lot about what’s happening outside of our own lives.

“A lot of us we don’t truly understand what it’s like in other people’s shoes and we need to. It’s the only way that things are going to change.”