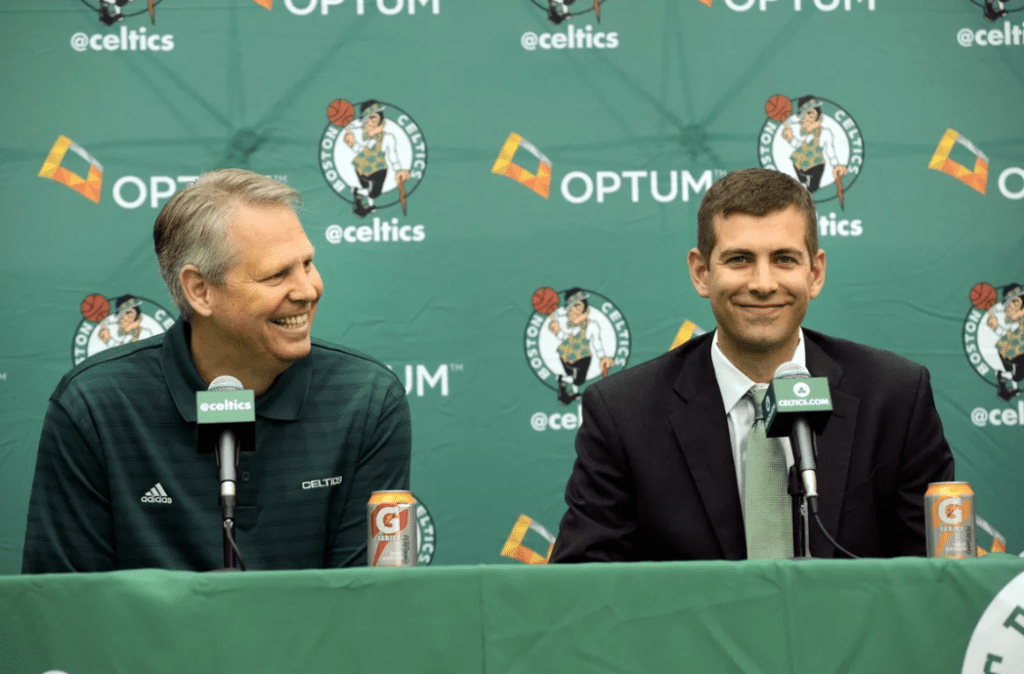 BOSTON — Brad Stevens can’t help but look back on that July day in 2013 when he accepted the offer from Danny Ainge to become the next head coach of the Boston Celtics.

In between Doc Rivers leaving the job and the first formal talks to take over the Celtics on the court, Stevens recalled Tuesday night before Game 2 a pivotal moment in Ainge’s re-shaping of the roster.

“I mean, it’s amazing. I’ve told this story before,” Stevens recalled. “Doc left on a Tuesday and Danny and I started talking about coming here, and he goes, let’s talk on Friday. I’m going to be pretty busy tomorrow, and then all I see across the screen, the trade for [Kevin] Garnett, [Paul] Pierce and [Jason] Terry to the Nets, and then four days later, I’m kind of looking at it like, ‘I’m not sure that I wanted to do this.'”

Then Stevens had a moment of clarity about what it was Ainge was crafting.

“It was great then, and all that was kind of his vision and our ownership’s vision, just kind of came to fruition. I think we all realize there was a great deal of luck in it, but I also know that he has been incredibly measured every step of the way.
You know, it’s been unbelievable to be in the room and watch.”

That trade eventually set the wheels in motion for multiple first-round picks and the chance to draft Jaylen Brown and Jayson Tatum. Going into Tuesday night’s draft lottery, the Celtics had a chance to claim the No. 2 or No. 3 overall pick if the Lakers landed in the No. 2 or 3 position. As it turned out Tuesday, they will wind up with Sacramento’s first-rounder in 2019.

How much did Ainge have to sell Stevens on the value of those picks?

“I don’t think anybody really knew what the value of those picks were going to be,” Stevens added. “Nobody could have guessed that at that time. Certainly would have never guessed that they were what they were, you know, because — when that trade was made, for every reason, Brooklyn was stacked, and it looked like they were going to go on a run that year but multiyear.

“Again, we’ve talked about the fortune that we’ve been able to live because of that, but my decision was totally based on the tradition and history combined with the ownership and front office, leadership and commitment to kind of just the process of growth that we want to bring every day.”

Now Stevens’ team full of sub-25-year-old stars has jumped out to a 1-0 lead in the Eastern Finals against LeBron James. In addition to Brown and Tatum, there’s Terry Rozier, whom Cavs coach Ty Lue called a “throwback” before Game 2, Marcus Smart, arguably the most unique defensive guard in the NBA, and Semi Ojeleye.

This is the third time Brad Stevens has taken a mid-major to the Final Four.

“Obviously, I think all experiences add up and can really be used to people’s benefit,” Stevens said. “These guys have done a ton for a long time on a huge stage, obviously led by LeBron, but they’ve got other guys that have played and been here, done that, and so obviously that’s a really big part of their team. You know, just because we’ve had less experiences, we really don’t dwell on them.

“We do have some guys that have been through these young playoff series, albeit a lot less of them, but we do feel like even in the last month, we’ve been through a lot of different challenges. For a guy like Jayson Tatum, all those challenges are new, but they’re fresh in his mind, and at the end of the day, when you’re a basketball player, you step out there between the lines, you’ve got a job to do, you’ve prepared well to do that, and you just go play. You don’t worry about those things that you can’t control.”

Celtics Escape with Win After Missed Foul on Lebron James

What should be Celtics trade deadline priority

Celtics No. 1 Seed: Should They Load Manage More?