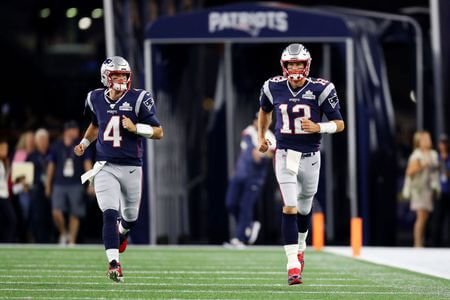 As all of Patriots nation waits for the start of free agency and Tom Brady’s decision, the future of the quarterback position in New England remains a major storyline facing the team.

Open up a still-early mock draft (yay, mock draft season!), and you might see the Patriots taking a quarterback as early as the first round.

Others have theorized that the Pats could delve into the free-agent market, adding someone like former first-round picks Marcus Mariota or Teddy Bridgewater as bridges with upside.

In all likelihood, Brady will be back with the Patriots for the 2020 season, but the 42-year-old’s age still presents a significant question mark as it pertains to the future beyond next season.

Could the answer already be on the roster in 2019 fourth-round pick Jarrett Stidham, even if the unthinkable happens and Brady doesn’t return? That’s an interesting question.

Stidham potentially offers them, assuming he can play and play well, one of the most valuable short-term assets an NFL team can have: productive quarterback play on a rookie contract.

Unfortunately for the Patriots, they have a $13.5 million charge from Brady’s 2021 signing bonus proration that will hit the cap at the start of the league year (March 18).

If Brady re-signs before free agency begins, they can spread that out over the next two seasons, counting $6.75 million against the 2020 cap, plus Brady’s cap number for the season.

The scenario doesn’t play out cap-wise quite like we’ve seen with other teams such as the Chiefs, Rams, or Bears because of Brady’s situation.

The prospect of having a cheap starting quarterback is intriguing; yes, the bill eventually comes due, but you have a short window where you can go all-out with the surrounding talent.

Although the idea sounds great in theory, it only works if Stidham is at least functional within the system to keep the team competitive.

Studying the 2019 QB class and #Auburn's Jarrett Stidham is impressive. He does a lot of little things that are advanced for a college QB. Here, confirms its C2, but notices the safeties playing shallow. Pumps to the left and then comes back to the far right for the TD. #Patriots pic.twitter.com/nrs2Y9n8mo

Admittedly, my evaluation of Stidham’s final collegiate season at Auburn was harsh, but his situation wasn’t good, and his 2017 tape was more in-line with what we saw out of him once he got to New England.

The spin out of Foxborough was all positive, both on and off the record, about Stidham’s performance in practice, even the head coach had nice things to say about “Stid” the kid.

“Tom hasn’t been able to do a lot this year. So, that’s given Stid an opportunity to go with the first group, and run our plays and run our offense, and that’s been good for him,” Belichick said back in December.

Some of the veteran defensive players were also impressed by Stidham’s performance in practice, noting his ability to read out coverages, pick up on disguises and tricks by the defense, and make competitive throws into tight windows.

Stidham only threw four regular-season pass attempts, one of which was a pick-six, in his rookie campaign, but we have a large sample of throws to go through from the preseason and training camp.

In camp, Stidham made decisive, accurate throws with plenty of arm talent and was running the offense with enough baseline knowledge to keep things moving. But he spent too much time in the pocket holding on to the football.

In the games, however, his timing was much more on-point, which suggests he might’ve been working on things in practice that caused him to slow down his process.

Preseason production should be taken with a giant grain of salt due to the lack of game-planning and starters on the field, but Stidham was in-line with past Brady successors.

The Pats rookie took the information he was given pre-snap by the defense and offensive formation, using that after the snap to make good decisions.

Here, the Lions are in a single-high shell when the Pats send Jakobi Meyers in motion. Meyers is followed by his man, tipping off to the quarterback that it’s man coverage. Now, Stidham knows it’s single-high man, and that he has a crossing route against an out-leveraged corner by Braxton Berrios (left slot). Stidham waits for tight end Ryan Izzo to take his man (no. 24) out of the passing lane, stands in against pressure, and delivers an accurate pass to Berrios while taking a big hit in the pocket.

The following week against the Titans, Stidham once again took the information the defense gave him and made the right read, this time, against a five-man blitz. The Pats motion the back out of the backfield and go with an empty formation. The linebacker goes out with Brossette, a man-coverage tell, and Stidham works the matchup with Meyers. The Titans blitz the free off-ball linebacker with only a deep safety in centerfield as help for the corners, so Stidham knows the corner on Meyers is at a disadvantage with the second-level open. Meyers wins on the slant for an easy completion.

Along with the ability to decipher coverages, Stidham also made terrific downfield throws with excellent ball placement into tight windows.

On this touchdown pass, the Titans are in man-free coverage with one-on-one matchups across the board. Stidham drops a back-shoulder dime to Damoun Patterson for the score, putting the ball in a perfect spot for Patterson to adjust late to the throw.

Stidham once again shows a good understanding of coverage rules by waiting for Berrios to clear out the second-level defenders here. With the linebackers out of the passing lane, Stidham has a dig route to Meyers against cover-3, an excellent route against that type of zone since the outside corners are covering the deep third. If those linebackers don’t get underneath the route, there will be a passing lane, and Stidham threads it to Meyers.

The corner recovers to contest the catch well, but the still frame puts in perspective how great the ball placement was from Stidham to make that completion happen.

Basing the next chapter of Patriots football off of 90 preseason pass attempts, one training camp and a season worth of closed-to-the-media practices is a difficult task.

But Stidham is the leader in the clubhouse to take over for Brady eventually, and the Pats don’t need to invest a high draft pick or free agent money in a quarterback with him on the roster.

The Patriots loosely adhere to the old Ron Wolf philosophy that you should draft a quarterback every year, a trope the former NFL general manager spread across the league.

Since Brady became the starter, the Patriots have drafted ten quarterbacks with recent picks at the position coming in 2014 (Garoppolo), 2016 (Brissett), 2018 (Etling), and 2019 (Stidham).

Belichick’s track record rightfully suggests he won’t put all of his eggs in the Stidham basket, but he is worth developing further before they invest heavily in another option.