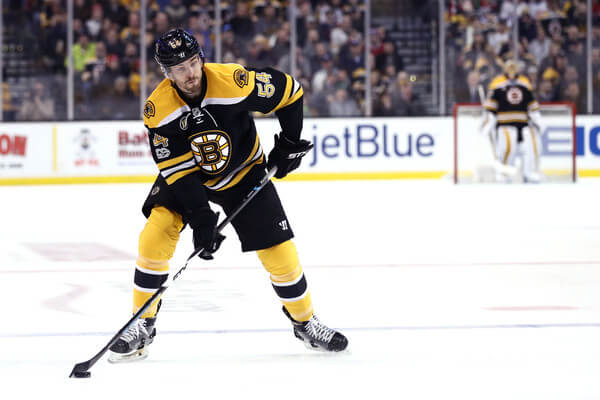 The Boston Bruins have traded fan favorite and renowned tough guy Adam McQuaid to the New York Rangers. In exchange the B’s get back defenseman Steven Kampfer, a 2019 fourth-round draft pick and a 2019 conditional seventh-round draft pick.

Though McQuaid may have lacked the necessary skill and speed to keep up in today’s NHL his toughness was unrivaled. He was always the first one on the ice to block a shot and was one of the more fearsome fighters in the NHL.

Over his nine-year NHL career with the Bruins, McQuaid has played in 462 games, tallying 13 goals and 53 assists for 66 points. His most impressive stat was his 652 penalty minutes.

General Manager Don Sweeney was effusive in his praise for the lifelong Bruin.

Head coach Bruce Cassidy continued in the line of praise for the bruiser.

“It’s tough to see him go,” he said. “10 years we’ve been together, going back to Providence. Today was a tough morning. We’ll miss him.”

🎥 INTERVIEW 🎥 #NHLBruins Adam McQuaid talks about competing for his job and the new challenges within the Atlantic Division pic.twitter.com/o7lWuifqOS

Now, the Bruins have seven NHL-ready and proven defenseman. Though there is still competition, it’s now been toned down a notch with McQuaid’s departure.

This is Kampfer’s second stint with the Bruins. He made his NHL debut with the Black and Gold back on December 9, 2010 against the New York Islanders. In that same season, Kampfer played in 38 games, scoring five goals and 10 points. He was dealt to Minnesota during the 2011-12 season.

Since then, Kampfer spent two seasons in the AHL and then played in 73 NHL games with the Florida Panthers from 2014-17. On November 8, 2016, he was traded to the New York Rangers. Over the next two seasons, he tallied one goal and two assists in 32 NHL games.