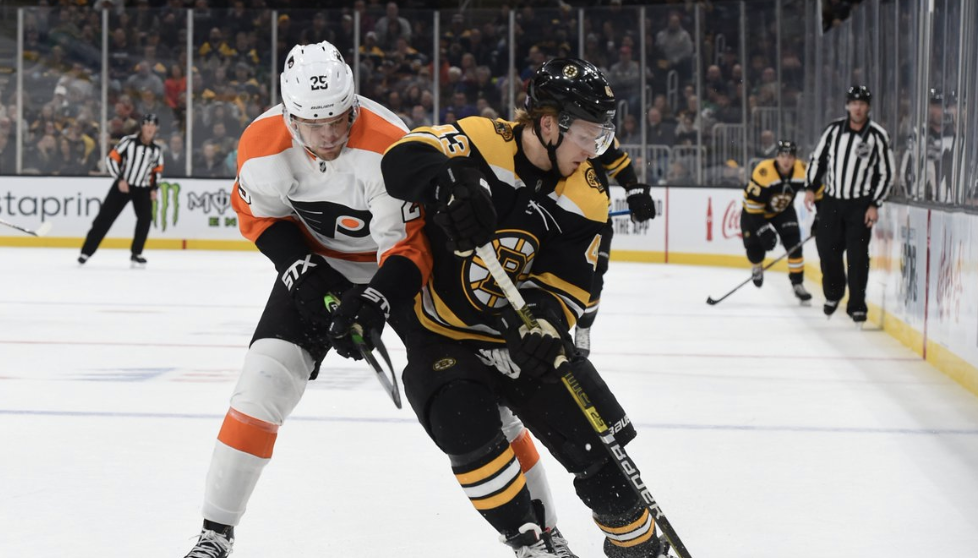 This is what Bruce Cassidy warned would eventually hit the Bruins.

The Bruins followed up their 4-2 road loss to the rebuilding Red Wings with a lackluster effort against the Flyers that resulted in a 3-2 shootout defeat Sunday night before a TD Garden crowd that was booing them off the ice at the end of a lackluster first period.

The Bruins looked slow and sluggish, uncharacteristically lost puck battles in the corners and behind the net and were outshot 14-5 in the opening 20 minutes. The Flyers, who were coming off a 3-2 shootout win the night before in Toronto, looked like the fresher, fitter team. Then again, the Flyers didn’t make the playoffs last season while the Bruins played through until June 12.

That’s not an excuse. It’s simple reality. How else to explain five shots in the first period and one shot in the opening nine minutes of the second period?

“The October schedule, I thought, was good for us. It fell into, even though we started on the road, it was every second night and I thought we were able to play through it,” Cassidy added. “We got our appropriate rest, now we’re a little more intense in games. So maybe it’s starting to hit us a little bit. We’ve got guys out of our lineup up front that we probably miss. Not putting it on the young guys, I think they’ve acquitted themselves well. So that’s part of it. But we’ve got to fight through it, and I thought we did at the end. So that’s got to be a little more of a mentality.”

It’s hardly the end of the world. The Bruins managed to salvage a point on a night when they probably didn’t deserve it. They even came within a denied David Pastrnak penalty shot with five minutes remaining in regulation from pulling out two points in regulation. The Bruins are still atop the Eastern Conference. But for a team with higher aspirations, it’s important for their head coach to send a stern message and that’s exactly what he did after Sunday’s game.

The Bruins sure looked like they had dead legs Sunday. But to their coach it was just a matter of a lack of energy.

“Poor. That’s about it. To sum it up, it was poor,” Cassidy told me when I asked how he would characterize the start.

What was behind it?

“Well, they [the Flyers] played the right way,” he expanded. “So, give them credit for playing a good game and managing the puck. Kept it simple, protected the front of their net when we did get through. They forechecked well, I thought, with good structure, so we had a hard time getting going. Why was it poor? I don’t think we had enough urgency, would be the simple answer.

“We weren’t breaking pucks out, got stuck below our goal line. In every facet there are — we never got an opportunity to sort of put them on their heels, in any way, shape or form. So as a result they’re on their toes, they get a lead, we’re chasing the game. As a road team that’s come in, played a little bit lately, they all of a sudden find energy because of that. That’s my explanation of the start. We need to correct it in a hurry, but the good news is we did find our game eventually, and we can build off that.”

For the first 14 games, when they started 11-1-2, they made a habit of jumping out fast in the first period. The last three games – all losses – they’ve struggled with consistency in the opening 20 minutes, falling behind 2-0.

On the first goal, the Bruins were caught shorthanded in their own end when Travis Konecny followed up a rebound and beat Jaro Halak. The culprit was Charlie McAvoy, caught up ice after he got too deep in the offensive zone and couldn’t get back.

“Well, the first goal, Charlie is behind their goal line trying to make a play, right? Play defense first. That is the message,” Cassidy said. “And, we’re trying to free them up a little to get going and be creative, but there’s right and wrong. Play the right way, and that, to me, was not playing the right way.

“So, we went back to what has been successful for us, and we’ll go back to the drawing board when we kind of get our D back in order. I think I told you why we made a couple of adjustments. We moved back because of that. You’ve got to play defense first in this league as defensemen. I don’t care if you’re the most offensive guy; you take care of your own end first and then use your skills accordingly and let the game develop in front of you. I think we forced it a little bit, so we addressed that, and I thought we were better with that as well.”

For the first 40 minutes, the highlights consisted of captain Zdeno Chara being honored during a first period timeout for passing the 1,500-game plateau in his career and a youth hockey game in the first period intermission that had more scoring chances in three minutes than the Bruins had in the first 30.

Chara’s moment was a special one as the Bruins had dedications and testimonials from players around the NHL played on the video board during the timeout. That was followed by a minute-long ovation during which Chara stood on the ice and patted his chest with his hand and waved his stick to the crowd.

Down 2-0, the Bruins appeared to cut the lead in half when Connor Clifton rushed up the right wing of the offensive zone. His shot was stopped but Par Lindholm, returning from a five-game absence due to an upper body injury, crashed the net and pushed the puck into the back of the net for an apparent goal just under three minutes into the second. But the goal was waved off because of goaltender interference.

The Bruins did show life in the third when they started buzzing all around the young and talented Carter Hart. That persistence paid off when Danton Heinen executed a spin-o-rama in front of the Flyers goalie and flipped the puck over Hart’s right shoulder six minutes into the third. Then Brad Marchand tied the game with 7:38 left and the building was rocking again. David Pastrnak was awarded a penalty shot with just under five minutes left. The Bruins had momentum on their side. Carter Hart stopped it and the Bruins were denied being bailed out.

Huge save by Carter Hart on the David Pastrnak penalty shot pic.twitter.com/mRnKirYjUl

So it went for the Bruins Sunday night. They had exactly two shots from forwards 32 minutes into the game.

“A concern to me is getting out of our end a little quicker, we’ve got to — you know, we have some smaller guys in the lineup with foot speed, so you hope that that’s an advantage with breaking pucks out, but right now it isn’t,” Cassidy said. “I thought there was some goalie-[defense] communication issues as well. We could have been cleaner. And then the forwards get frustrated, so they don’t manage it through the neutral zone, so they’re not seeing as much as they’d like and it snowballs. That would be my concern that we’ll start addressing (Monday).”

The Bruins will no doubt look to jump out to a fast start Tuesday night against the Panthers.