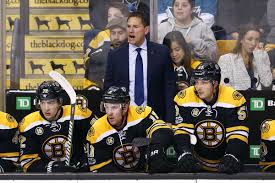 BOSTON — When the Bruins were winning under Claude Julien and advancing to the Cup finals in 2011 and 2013, they were known as one of the tightest checking teams in the NHL.

It’s not that they couldn’t win high scoring games, it’s just that the system was different.

Now, with Bruce Cassidy blessed with some of the fastest skaters any Bruins team has ever had, these Bruins can open it up with the best of them. Having David Pastrnak skating circles around the lost Maple Leafs in the offensive zone and lighting them up for nine points in two games doesn’t hurt either.

“Listen, as a coach, when you win, you’re happy,” Cassidy told me after Game 2. “I don’t know that any coach is ever very happy. If you know any coaches, we’re always worried about something. At the end of the day, we talked about Toronto – to play them well, you have to check. You have to check well with your legs, with stick position on the ice and body position. I think we’ve done that for the most part. We’ll get away from it, are human, but we’ve always been a team, I thought, if you look at our stats throughout the year, we can play both ways. We’ve won 2-1 games. We’re comfortable in those. We’ve won 6-4 games if we have to.”

“The structure, like we had that system in place, more guys are confident,” said defenseman Kevan Miller. “We’re going to back each other up. There’s five men on the ice and we know where each other are, and I think that’s probably the biggest thing.”

With the way the Leafs aren’t checking the Bruins’ and letting the likes of Pastrnak, Brad Marchand, Patrice Bergeron and David Krejci have free rein, Cassidy has had the best of both worlds so far.

“It honestly doesn’t feel like we have that much room out there,” Marchand said. “They play really tight. Every now and then there might be a break down but it happens both ways. Sometimes you capitalize and sometimes you don’t. Fortunately for us we capitalized on a couple today.”

Then there’s Tuukka Rask. With the Leafs down 5-2 and getting some second period momentum thanks to lax play in the Bruins own end, he had to come up big several times to keep the margin at three.

“Yeah, he’s done that all year,” Marchand said. “He is the backbone of the team and he is one of the best goalies in the league. He makes big saves at big times and when it is needed, and was needed there a couple of times. You know, they put a push on, it easily could have been a different game so he did a good job back there.”

The question now is whether the 12-4 domination on the scoreboard translates to Games 3 and 4 on the road in the hostile environs of Air Canada Centre.

“So, we know the formula we want, and Monday we’ll try to stick to that again,” Cassidy continued. “It’ll be more difficult up there, I’m sure, but at the end of the day, as a coach, you’d like to see both sides. Our identity is hard to play against, but we want to be hard to play against because we have the puck and we can score, as well. So yeah, you’re always pleased when you win these type of games, but we’ll look at it, and I’m sure tomorrow there will be stuff that will get your stomach churning again that you need to be better. That’s just the life of a coach for the most part.”