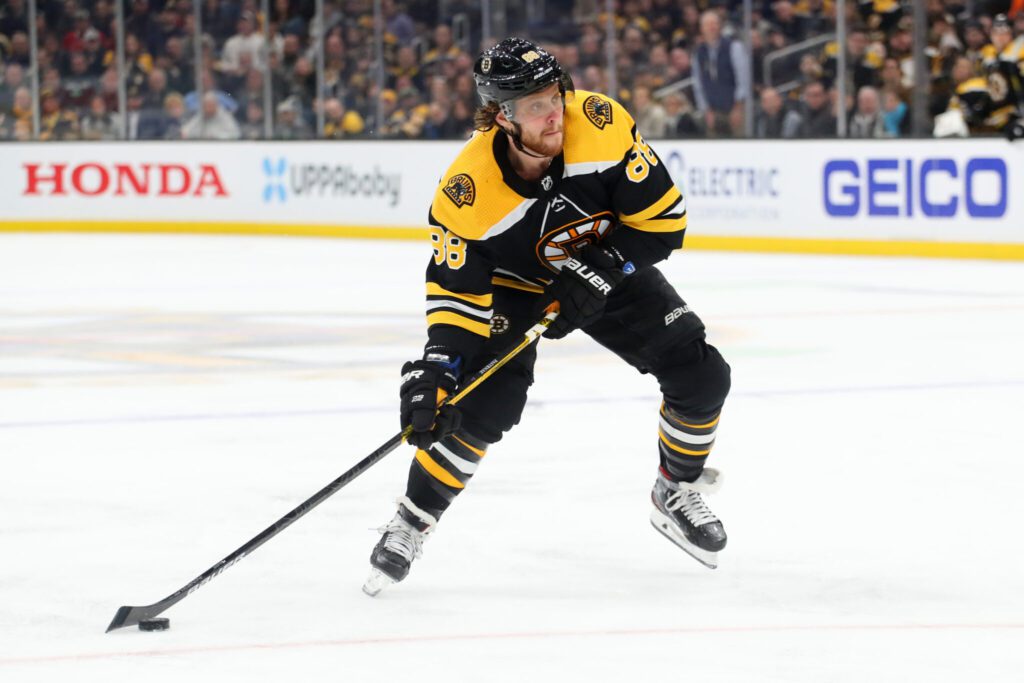 BOSTON, MASSACHUSETTS - FEBRUARY 12: David Pastrnak #88 of the Boston Bruins skates against the Montreal Canadiens during the third period at TD Garden on February 12, 2020 in Boston, Massachusetts. The Bruins defeat the Canadiens 4-1. (Photo by Maddie Meyer/Getty Images)
Share
Facebook Twitter Email

Anyone watching the Bruins postseason run could tell David Pastrnak wasn’t his usual self out there. The flashiness, the speed and the playmaking all seemed to be running on lower levels than usual.

Bruce Cassidy confirmed the eye test in his exit interview Wednesday afternoon when he stated Pastrnak dealt with a lower-body injury throughout the postseason.

“You could see he wasn’t at top speed,” Cassidy said via Zoom.

Pastrnak’s injury appeared to occur jumping up in celebration after Patrice Bergeron’s game-winning goal in double overtime in Game 1 against the Hurricanes.

Part of that may have stemmed from Pastrnak not being in the best possible game-shape.

“Obviously missing time, him and [Ondrej] Kase, their conditioning level wasn’t where it needed to be to stand the rigors of that,” Cassidy said. “And that was a bit of circumstance. Typically you have the whole year to build that up if you miss a bit at the start. We didn’t have that luxury this year.”

The Bruins, along with the rest of the NHL, sure didn’t have that luxury heading into this postseason. But it didn’t help that Pastrnak and Kase missed almost all of the two-week training camp before heading to the Toronto bubble.

According to Pastrnak’s agent, No. 88 headed back into quarantine after coming into contact with someone who tested positive for COVID-19. He also skated at a rink in Malden, violating NHL protocol.

Pastrnak re-joined the team on the ice at the start of the bubble experience, while Kase came up a week later and didn’t play until the final game of the round-robin.

Pastrnak finished the postseason with 10 points in 7 games. He missed Games 2-4 against the Hurricanes due to the injury. Meanwhile, Kase finished with zero goals and three assists in 10 total postseason games. All those points came in the Carolina series, as Tampa Bay kept him from registering a single tally.