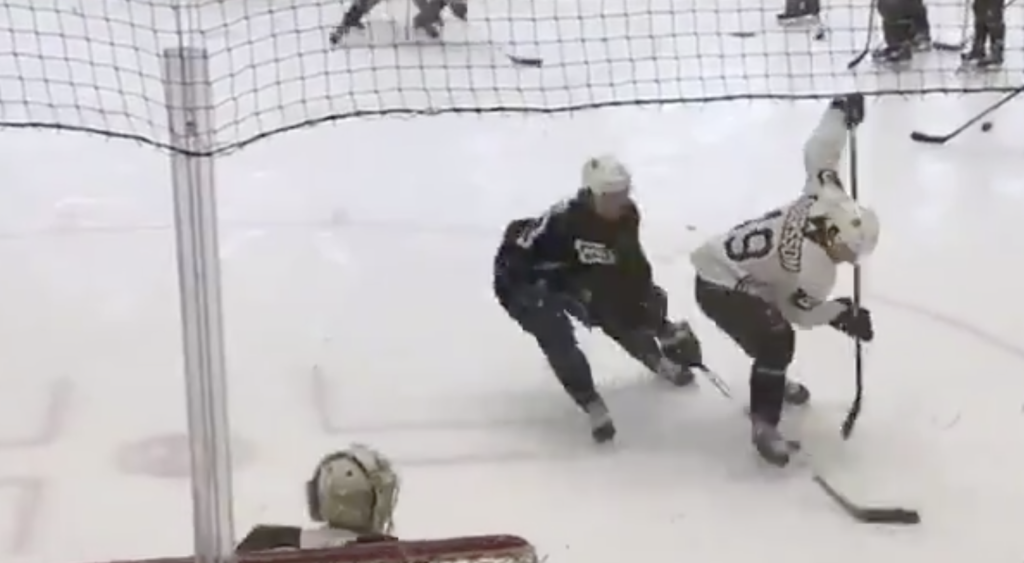 BRIGHTON, Mass — At first glance, the performances put on by the 2018 Boston Bruins draft class seemed to disprove the widely agreed-upon view that a team has to have a first round pick to have a successful draft.

The immediate standout from this year’s development camp was 2018 third round pick Jakub Lauko.

After the second day, Lauko said that he looked up to Calgary Flames forward Johnny Gaudreau because he was small but very good and fast. Lauko put that comparison to use when he was consistently blowing by defenders, most notably when he left a defender in the dust and went top shelf during the final day’s scrimmages — which had the almost packed house in awe.

For Lauko, his first development camp was a positive one.

“It was very good,” he said. “I really enjoyed it. The activities off the ice were really good. It was overall a very good experience.”

2018 second round pick Axel Andersson and 2018 fourth round pick Curtis Hall duke it out in 1-on-1s at #NHLBruins Development Camp pic.twitter.com/Wwo9SqE8dS

When it came to what he actually learned from such a big event, Lauko knew exactly what he had to do going forward.

“I learned some things about the organization,” he said. “I found out that I have to keep working to get stronger and work on my skills like stick-handling and I look forward to being here again and meeting the other guys.”

Bruins general manager Don Sweeney was available after the final session of camp and after sifting and dodging many of the John Tavares-centric questions that were asked, he spoke on Lauko’s performance at camp.

“Yeah, clearly he has the straight-ahead speed and the ability to get behind defenseman through the neutral zone,” said Sweeney. “He gets on top of pucks. He showed finish today which he’s shown at the levels he’s played at.”

He also spoke on whether or not Lauko was a candidate for the Providence Bruins next season.

“He’s a candidate,” said Sweeney. “The IIHF has some contractual things that need to be verified in order to sign him right away. He’s drafted in the Quebec league. There’s a bunch of options for him. Never gonna get it out of ourselves in terms of where we’re placing a player. The player himself, his advisors, his family always have input. You need to do what’s best for him.

“That’s a tough league for young players. He’s played against men and sometimes they think they’re further along. We need to be very confident that he’d be able to handle that level before we even consider moving him in.”

Another standout was 2018 fourth round pick Curtis Hall.

“Big strong kid,” said Sweeney, describing Hall. “Not sure if he’s a pure center or a wing but I like the versatility. My son commented that his flow is really good. Scored a nice goal today, he’s got a heavy shot. I’m not going to cheer for the school he’s going to but I’ll cheer for him. I’ll be anxious to see how Yale sees him fit in — so a good impression.”

Hall had some highlight reel plays at camp. Even though 6-foot-3, he has wheels and those were on full-display all throughout camp. Also, on display was his hard shot.

After the first day, Hall said he looked up to current Bruin David Backes. There’s many similarities in their game: both can be put in any situation, aren’t afraid of the dirty areas, and are big and can hit. Hall has the advantage in the speed category.

He also has a very clear view of himself when he’s on the ice.

“I think I’m the hardest working player on the ice whenever I’m out there,” he said. “So I want [the coaches] to get that.”

But the biggest facet of Hall that was always being touted is the hair. If that’s not true hockey flow, then nothing is.

1-on-1 with #NHLBruins 2018 4th round pick Curtis Hall at Development Camp pic.twitter.com/MMBTUVjFW3

Bruins 2018 second round pick Axel Andersson also had a great camp. He wasn’t really a standout per say but if you watched him closely, there are lots of signs that one day, he will be successful in the NHL.

His style of play on defense follows in the footsteps of many of the new-age, mobile defenseman around the NHL. He says that he looks up to Charlie McAvoy, and it shows. When he skates with the puck, his head is always up. He’s poised and is a very smooth skater. He also moves the puck very well.

After the final skate of development camp, Andersson talked of how camp went for him.

“It was just a great experience to be here with all of the competitive guys so a lot of competitiveness and we left it all on the ice,” he said. “We’re getting better and better.”

Not to be forgotten are 2018 sixth round pick Dustyn McFaul and seventh rounder Pavel Shen.

McFaul is only 17-years-old, which means he has a lot of development to undergo. Many scouts regard him as a late-bloomer, so he still has a ways to go. He had very set expectations on what he would get out of development camp.

“Just come down here and learn some things,” he said about his goals for this past week. “Take it to the next level and hopefully take that back to next year.”

Just from watching these past four days, McFaul is very poised with the puck and has the potential to be a very mobile defenseman who is smart with the biscuit on his stick.

McFaul is unsure of where he’ll play next year, but is committed to Clarkson University in 2019.

Shen had a solid camp as well. He really turned things up when he sent one into the top corner of the net from in tight.

🚨 Do you like goals? We’ve got another. Pavel Shen makes it 5-4, Team Jamie. pic.twitter.com/NK93yBUUzv

It’s important to note that this draft class hasn’t proved anything yet; one good week means nothing in the grand scheme of long careers.

But at least they all seemed to get off on the right foot.