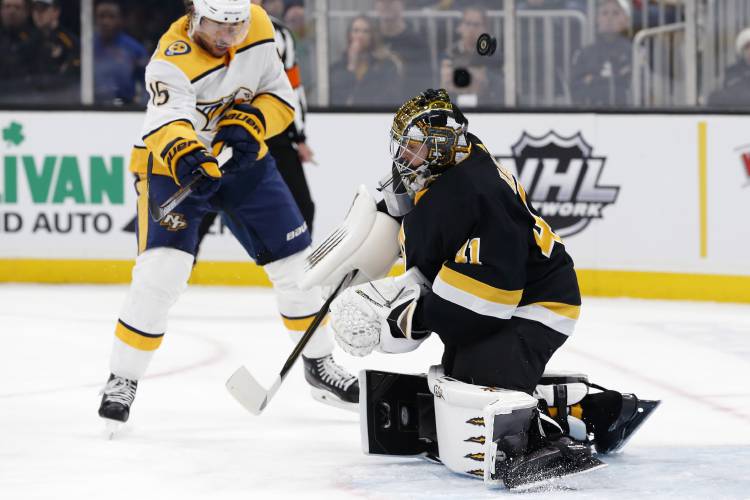 Let’s get this out of the way early: the sky is not falling for the Boston Bruins. It’s mid-December. Teams lose some games. These things happen. They still have a nine-point lead on the second-place Maple Leafs in the Atlantic Division.

With that being said, they’ve only gotten two points in one of their past nine games.

For the third game in a row, the Bruins skated off the Garden ice with only a point, as they lost 4-3 to the Predators in overtime on Saturday night. This comes after losing 3-2 to the Islanders in a shootout the game prior and 4-3 to the Kings in overtime on Tuesday night.

After Saturday’s loss, Bruce Cassidy stated that the Bruins were “sick of losing”.

“Yes, [body language and what they’re saying],” said Cassidy as to why he believes his team is sick of losing. “I don’t see a negative in the room in terms of blaming each other or lack of effort in practice, lack of compete to come back, I don’t see that, but I just see that they’re getting frustrated with not being able to get into the winner’s circle.”

At the end of the day, Saturday night was a microcosm of the Bruins play over the past month.

We’ll start with the most obvious one: the Bruins needed overtime for the third game in a row and lost.

On the bright side, they get a point. On the not-so-bright side, they left another point on the table. All three overtimes showcased multiple chances for the B’s to end it. They outplayed the Kings, Islanders and Predators in each respective extra frame. Those three teams just finished when it mattered.

The shootout is a whole different issue.

I’ll leave it with this: the Bruins are 2-9 when they need extra time. That pretty much says it all.

Jaroslav Halak was sub-par in regulation on Saturday night. The three goals allowed in the main 60 minutes weren’t tough tasks.

“I believe we have two number ones in there, but those were three goals that were very saveable,” said Cassidy of Halak’s play. “Pucks that probably shouldn’t end up in your net. So a little bit of that is our goaltenders have to push through that right now.”

The first Predators goal was a backhand by Roman Josi from the top of the slot that slipped past Halak’s blocker. Then there was Filip Forsberg bouncing one off No. 41’s shoulder and into the back of the net.

The worst of the night came seconds later when Halak came out to play a puck, but Josi tipped it past him and slapped it into an open net to give the Predators the lead in the third period.

“I was first to the puck,” said Halak, explaining his decision. “Just one of those plays that bounced the other way and he was able to put it in. It happens. It happens to everyone. I feel bad that there’s nobody when the goalie makes a mistake, there’s nobody who can cover him most of the time.”

Halak actually made some big saves against the Predators. After the gaffe on the third goal, he stoned Forsberg on a breakaway and then seconds later turned aside another high-danger chance from Nashville’s No. 9.

But for the past month, the Bruins goaltending hasn’t been so clutch. Tuukka Rask’s save percentage sits under .900 and Halak’s had some questionable performances — most notably Saturday night and two Saturdays ago against Colorado.

The Bruins seem to be in love with one-goal games right now. Since Nov. 21, exactly one month ago, the Bruins have had a total of 16 games. They’ve won or lost by one goal in 10 of them.

That was no different against the Predators.

“That’s hockey,” said David Pastrnak. “Sometimes you win games you shouldn’t be able to win and that’s what happened to us a little bit. I was saying it in November. Now it’s the other way a little bit.”

At the end of November, the B’s had a five-game stretch from a 3-2 win over Buffalo to a 3-2 win over the Rangers where four of the five were one-goal wins. Any of them could’ve gone either way.

Since Dec. 11, the B’s have lost 3-2 to the Capitals and the Lightning on consecutive nights, 4-3 to the Kings, 3-2 to the Islanders, and then Saturday night’s OT loss to the Predators.

I know — I’m throwing lots of numbers at you. But there’s a point.

If the B’s are going to consistently play in these one-goal games, they’re playing with fire. They can go either way, and the last month has proved it.

We’ll end this on a positive note: the 2019-20 Bruins happen to be pretty solid in third periods.

Though it may get overlooked, on Saturday night, the Bruins were resilient. After the two quick goals given up to lose the lead, the B’s stormed back in the final half of the third period, culminating in Patrice Bergeron’s game-tying goal with less than two minutes to go.

“It’s good for us that we’ve been able to come back and at least get a point,” said Pastrnak. “We’ve put ourselves in a good position to get one. We’ve got to be better a little bit I guess, try to extend the lead a little bit in the third. We’ve been good in the third the whole season so today was just a couple of tough bounces.”

The Bruins have had numerous third period comebacks this season. In the past month, the Black & Gold have tied the game or won it in the third seven times.

If there’s any positive to take away from this skid, it’s that the B’s can turn it up when they’re down.

And Saturday night was no different. They just couldn’t finish the job in overtime.