Bruins Advance With 2-1 Win Over Hurricanes 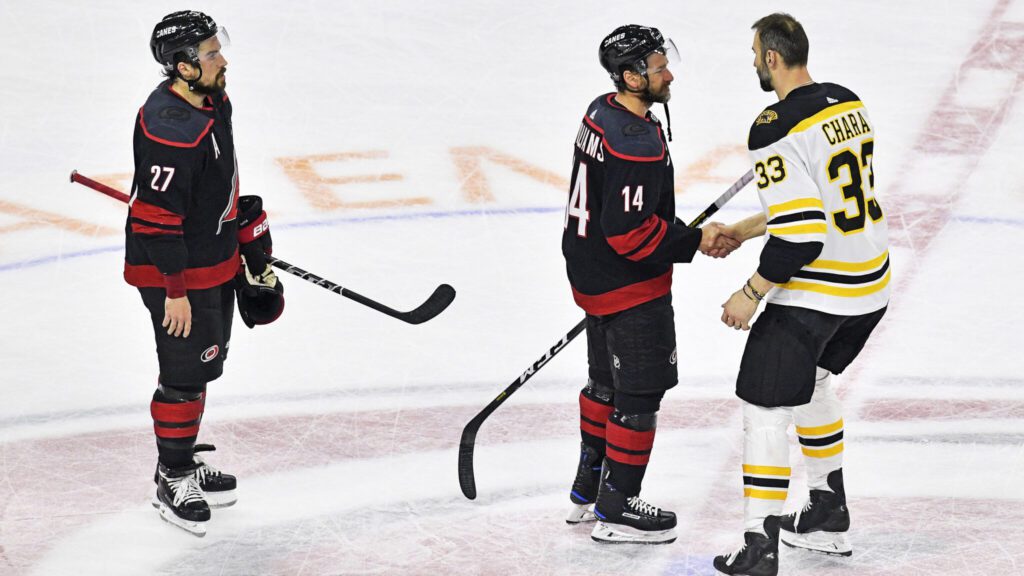 RALEIGH, NORTH CAROLINA - MAY 16: Zdeno Chara #33 of the Boston Bruins shakes hands with Justin Williams #14 of the Carolina Hurricanes after defeating the Carolina Hurricanes in Game Four to win the Eastern Conference Finals during the 2019 NHL Stanley Cup Playoffs at PNC Arena on May 16, 2019 in Raleigh, North Carolina. (Photo by Grant Halverson/Getty Images)
Share
Facebook Twitter Email

The Boston Bruins are moving on.

The Bruins defeated the Carolina Hurricanes 2-1 to win their best of 7 Eastern Conference opening round series 4-games-to-1.

The Bruins mustered all their offense during the last 5 minutes of the second period after entering the frame down 1-0.

The Bruins had tons of chances throughout including a pair of breakaways but did not break through on goalie Peter Mrazek until there was 4:40 left in the second period.

On the power play David Krejci picked up a deflection out front and put it home tying the game at 1.

Then with second to go n the period – B’s again on the power play – Patrice Bergeron fired a puck from behind the net that ricocheted in off Mrazek’s skate and into the back of the net with 3.5 seconds to play.

The Bruins are likely headed for a second round matchup with the Tampa Bay Lightning who closed out Columbus 4 games to 1 earlier in the day. There’s a chance Boston faces the Flyers – who are on the verge of closing out the Canadiens – but that would only happen if the Capitals come back from 3-1 down to beat the islanders. NYI are the lowest remaining seed and would face Philly should both teams advance.

Play of the game: Zdeno Chara makes a save

In a one-goal game, one bounce could’ve been the difference between a Game 6 on Thursday rather than sending the Hurricanes home packing.

Zdeno Chara willed a bounce to go the Bruins’ way in the second period when a shot appeared to have trickled past Halak. The Boston defenseman was there however to pull the puck off the goal line and keep the Bruins at a one-goal disadvantage.

Later in the game, the importance of the play became even clearer as the Bruins barely eked out a 2-1 victory to advance.