Bruins beat Capitals, 3-1, in Game 5 to move onto Second Round 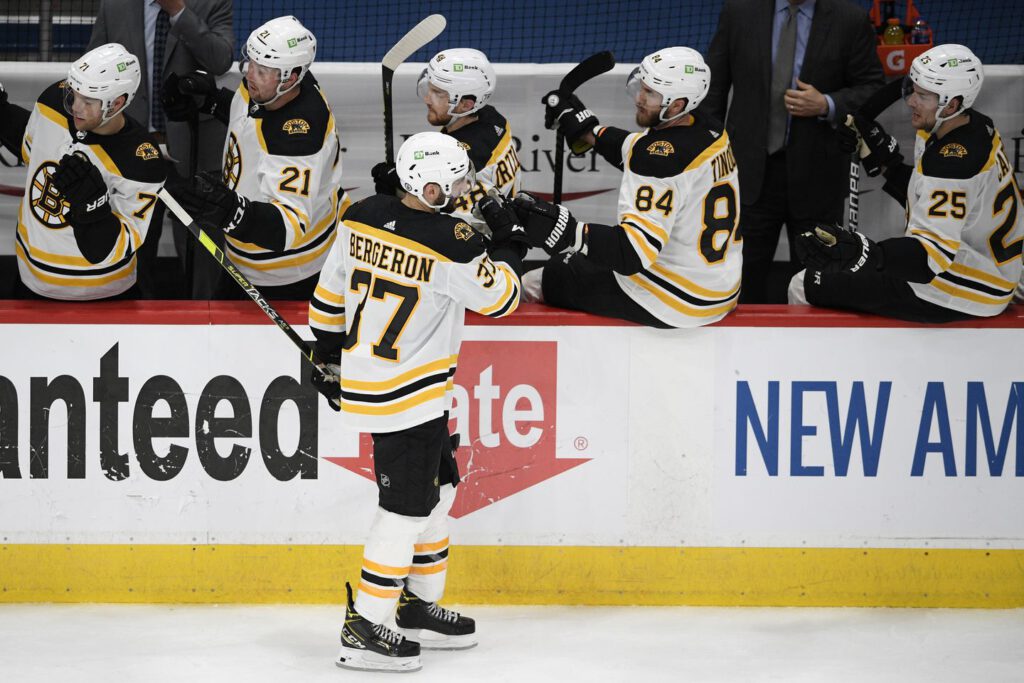 The Boston Bruins and Washington Capitals played Game 5 of their series Sunday night. The Bruins went into this one leading the series, 3-1. Kevan Miller remained out of the lineup because of the bad hit Dmitry Orlov laid on him in Game 4. Jarred Tinordi was asked to step up and fill in for Miller.

In the first four minutes of play, the Bruins generated three shots compared to the Capitals zero. 5:07 into the first, Zdeno Chara laid out Craig Smith and then exchanged pleasantries with Jarred Tinordi, starting the crispy encounters in Game 5. Deeper into the period, there were plenty of big hits and post-whistle scrums. Both teams were playing at each other’s level and neither side was able to find the back of the cage.

The Bruins started the second with another solid penalty kill. Soon after, 2:28 into the second, David Pastrnak faked Nick Dowd out with a between the legs move and found his way to the net to beat Ilya Samsonov on the far side to give the Bruins a 1-0 lead. Throughout the course of the second, the play was back and forth and both sides provided stellar defense. Regardless of getting widely outshot in this period, Patrice Bergeron gave the Bruins a two-goal lead with 5:55 left in the second. This one was off a back-foot snapshot placed right inside Samsonov’s left pipe. At the end of the second, Boston had four shots on goal and two went in. It was a tough period for Samsonov.

After the second, the Capitals still led in shots on goal (30-13), scoring chances (19-8), and high danger scoring chances (6-5). Tuukka Rask and the Bruins defense were perfect through forty minutes of play.

11 seconds into the third, Conor Sheary picked up his own rebound and put it home to cut the Bruins 2-1. Throughout the course of the front end of the third, the hits and chances were back and forth — Rask and Samsonov stood tall for their teams. At the midpoint of the third, the Capitals generated more offense throughout. They led in scoring chances (5-2) and high danger scoring chances (3-1). Then with 7:35 left in the third, Bergeron netted his second of the game, giving the Bruins a 3-1 lead. This time he picked up a loose puck in the slot and sniped over Samsonov’s top left corner. Later in the third, Lars Eller netted a goal that was called back because of a goalie interference call on Evgeny Kuznetsov. Eventually, the horn sounded and the Bruins won Game 5, 3-1, to win this series over the Capitals and move onto Round 2 of the 2021 Playoffs. Rask made 40 saves in this game.

5:07 into the first, Chara laid a big hit on Smith and then got into a little shoving match with Tinordi.

Zdeno Chara with a big hit on Craig Smith — and then exchanges pleasantries with Jarred Tinordi. pic.twitter.com/5O4QJHCO4Y

Then with 11:57 left in the first, Charlie McAvoy laid out Tom Wilson. It was apparent very early in this game that it would be another grudge match.

Charlie McAvoy with a HUGE hit on Tom Wilson: pic.twitter.com/hlwTWUqPYj

With 7:29 left in the first, Rask made a phenomenal save on Sheary’s high danger scoring chance.

Tuukka Rask with a monster stop on Conor Sheary: pic.twitter.com/lICUF7Zmf2

2:28 into the second, Pastrnak did what he does best, which is score filthy goals. Bruins led 1-0 after that beauty.

Bergeron’s back-foot snapshot found its way to the back of the cage with 5:55 left in the second to give the Bruins a two-goal lead.

With 2:50 left on the clock in the third, Connor Clifton laid the body on Garnet Hathaway.

Connor Clifton with a big hit on Garnet Hathaway: pic.twitter.com/XtC097StIF

11 seconds into the third, Sheary netted the Capitals first of the night to cut the Bruins lead to one.

Then with 7:35 left in the third, Bergeron sniped Samsonov’s top left corner and gave the Bruins a 3-1 lead.

Bergeron grabs his second of the game and extends the Bruins lead!#NHLBruins 3#ALLCAPS 1 pic.twitter.com/MbQHUS3qtK

The Bruins will play the Pittsburg Penguins or New York Islanders in the second round of the 2021 Playoffs. Their series is tied at two apiece and Game 5 takes place Monday at 7 p.m. ET.

REPORT: Bruins Looking to Move into First Round of 2022 NHL Draft