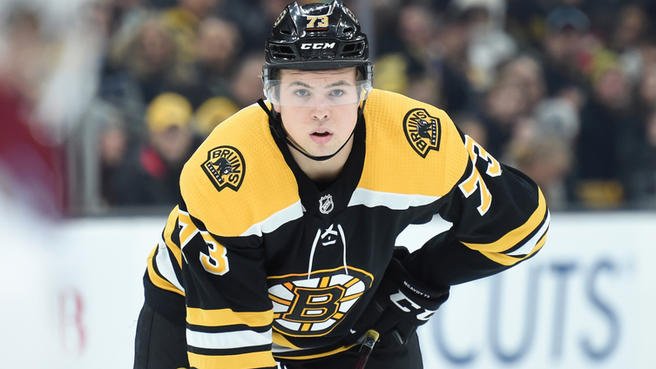 It’s finally happened. We’ve been waiting for this news to break all summer and on Sept. 15, it’s been finalized.

According to TSN’s Bob McKenzie, Charlie McAvoy and the Boston Bruins reached an agreement on a three-year deal with an average annual value of $4.9 million.

The Bruins were very cap-constrained heading into these negotiations, as they had just over $7 million in cap space prior to re-signing McAvoy. With this deal done, the Bruins have about $3.2 million in cap space. That money will presumably go toward giving RFA Brandon Carlo a new deal.

So what do we think of this McAvoy contract?

For starters, this deal is a great move by the Bruins in the short-term. An AAV of $4.9 million for a top-pairing defenseman on a cap-constrained team is a steal. With one other small move, the B’s will probably have just enough room to sign Carlo.

With Bruins Training Camp this week, @DJ_Bean joins @emarinofsky to preview it.

The deal looks even better when you look ahead to next offseason. According to @bruinscapspace on Twitter, with McAvoy at $4.9 million, the Bruins will have roughly $29.2 million in cap space next summer. When Carlo signs, that cap space will decrease a bit.

Torey Krug and Charlie Coyle will be UFAs next offseason. Jake DeBrusk is an RFA. With McAvoy signing for only an AAV of $4.9 million, the Bruins have lots of extra space to give Krug his big, but team-friendly, contract. DeBrusk’s money shouldn’t be an issue and keeping Coyle around for depth down the middle doesn’t seem like a big one either.

The obvious comparable to this deal is what Zach Werenski just signed for out in Columbus. The young d-man signed for three years, $15 million with an AAV of $5 million. Both McAvoy and Werenski were RFAs this offseason and have immense potential as offensive defensemen.

And that’s exactly where the risk lies.

McAvoy’s goal all along was to reach a long-term deal with the Bruins. The value of a contract of that length would most likely be one that looks a bit expensive now, but as time goes on and McAvoy gets better and better, the AAV would look cheaper and cheaper.

David Pastrnak is the perfect example of this. After his entry-level deal, the B’s inked Pastrnak to a six-year, $40 million contract in Sept. of 2017. This seems like an eternity ago given Pastrnak’s growth but back when he signed it, he’d only had one good year — 70 points in 2016-17. The $6.66 million AAV his contract carried was high in the short-term but is deemed a great deal because of what it would end up being in the long-term — very cheap.

And that’s exactly what it’s been.

The real risk in McAvoy’s deal comes from what could happen once the short-term expires into the long-term. With McAvoy as a sure bet for being one of the league’s future top defensemen, he’ll want to be paid like one.

Obviously the Bruins won’t look to re-sign Backes, but what Sweeney does with Rask and Krejci is still up in the air. When McAvoy becomes an RFA again after the 2021-22 season, Patrice Bergeron will be a UFA and David Pastrnak will be a UFA the following offseason.

The worst-case scenario for the Bruins is to have what happened with P.K. Subban and the Montreal Canadiens happen to them and McAvoy.

When Subban’s entry-level deal came to an end after the 2011-12 season, it was pretty obvious that he’d become one of the league’s top d-men. In two full seasons, he amassed 38 and 36 points and was the future up in Montreal.

Instead of inking Subban long-term, they got him on a two-year deal worth $5.75 million. It was an inexpensive deal in the short-term. Sounds like fun, right?

Over the next two seasons, Subban won a Norris trophy and scored over 50 points for the first time in his career. Those two seasons primed him to earn a lot more money.

Negotiations in the summer of 2014 were tension-filled; Subban was an RFA and common ground was nowhere to be seen. Tensions peaked when the Canadiens and Subban went to arbitration. But 24 hours after, before the arbitrator could make a ruling, the Canadiens signed Subban to a monster eight-year deal worth $72 million, making Subban the highest-paid defenseman.

It also carried an AAV of $9 million, which was the third-highest in the NHL at the time.

What happened to Subban after all of that is pretty well-documented. But when it came to the massive payday, it could’ve all been avoided had the Canadiens signed him to a big deal on his second contract.

It’s hard to think that will happen between the Bruins and McAvoy in the future — Sweeney is tremendous at signing his own guys and the trendiest thing going in the Bruins locker room is to take less so the team can win more.

With that being said, Subban’s situation isn’t out of the realm of possibility which is exactly what makes this thing so risky.

McAvoy’s deal is great for the Bruins in the short-term; it’s a huge win for Sweeney and the gang. But long-term, things could get pretty dangerous and Sweeney may find himself walking the tightrope with one of the league’s top defenseman.

Where Do the Bruins Go From Here?