Bruins Costly Mistakes are Coming at the Worst Times Against Lightning 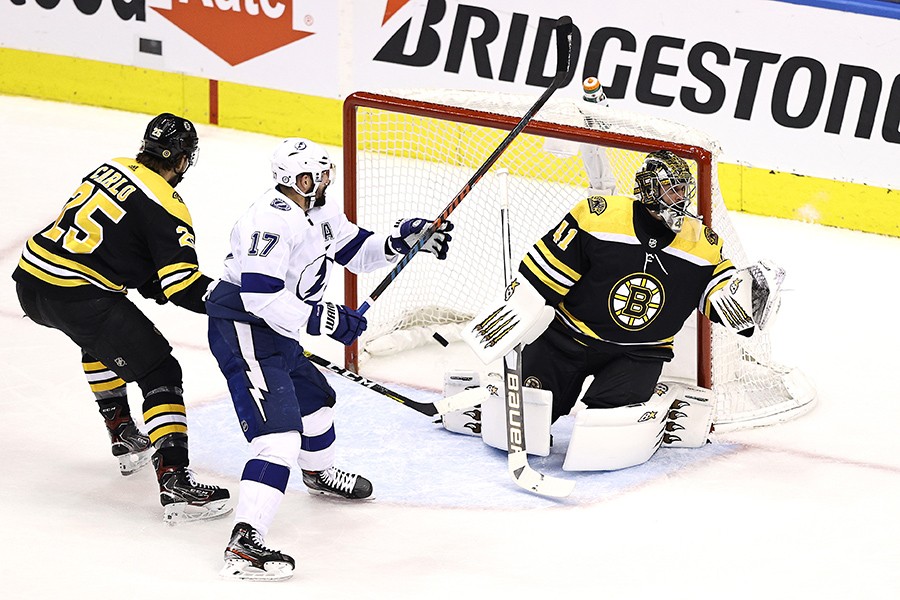 The odds were already stacked against the Bruins heading into their second-round matchup with the Lightning.

If the Bruins were to have a chance at getting past Tampa Bay’s star-studded lineup, they were going to have to be near perfect, if not actually perfect. It was a bit of a large ask, but completely realistic.

That no longer feels realistic after four games. The Bruins have been the furthest thing from perfect, as was most recently evident after their 3-1 loss in Game 4.

“It’s a great team,” Charlie Coyle said of the Lightning after Game 4. “They’re here for a reason.”

There’s almost no escaping one, simple fact at this point: the Lightning are the better team. They’re better on paper and when they want to, which they often seem to when playing the Bruins, they’re better on the ice, too. Scroll up and down the lineup: they have advantages almost everywhere.

The advantage that was greatest heading into this series was in net. With Tuukka Rask, the goaltending matchup is pretty even — both Rask and Andrei Vasilevskiy are Vezina-caliber, consistent goalies. But the Bruins don’t have Rask for this series, and instead have their 1B in Jaroslav Halak.

Again, winning the series with Halak in net was never out of the question — he played exceptional for the majority of the first round against the Hurricanes. But he needed to find another level in this second-round matchup and from Games 2-4, that next step for Halak went backwards.

There have been way too many soft goals given up by Halak through the past three games, and by “way too many”, I mean more than zero. To beat the Lightning, Halak couldn’t let pucks dribble past him and graze off his glove on their way to the back of the net.

A perfect example of this arose in Game 4.

Midway through the second period of a 1-0 game, Ondrej Palat drove a one-timer towards Halak. The shot came from a few feet from the tops of the circle and Halak had time to read and react. Yet Halak missed the shot with his glove — which has become a common problem — and the puck went straight in.

2-0 Lightning in a very important Game 4.

“We need that save,” Bruce Cassidy said of Tampa Bay’s second goal.

Halak gave up four goals on 16 shots in Game 3 before being given the boot. That was unacceptable.

Let’s take it back to Game 2, though, when it was a 2-2 game with nine minutes to play. Blake Coleman came in on Halak on a breakaway and just squeaked one through Halak’s legs to give the Lightning the 3-2 lead. Brad Marchand went on to score later that period to tie it up, but the Bruins still lost in overtime.

Had Halak made that save, there’s a good chance the Bruins walk away from Game 2 with a 2-0 series lead.

The issues with the Bruins in this series don’t stop with Halak. They spread widely throughout the rest of the team.

If we’re just sticking with Game 4, Nick Ritchie’s five-minute major stemming from his hit on Yanni Gourde ranks at the top of the list. Talk about a complete “wheels are falling off” moment. To hit someone that late and that far away from the boards in today’s NHL with the score 2-0 in a very important Game 4 — not smart. The Lightning scored on the power play afterwards to make it 3-0 and from that point forwards, the Bruins lacked energy and urgency in their game.

Also, the Bruins defensive miscues continued in Game 4, when Ondrej Palat was given a red carpet-sized path to the net as four Bruins defenders stood around and watched him deposit the game’s first goal past Halak.

This will be the lasting image of this series pic.twitter.com/1ZZWAwGcQF

“We had some breakdowns in front of our net early on, we have to correct those, we need to be harder, we need to be more assertive in those areas,” Cassidy said. “Guys that we rely on to be hard defensively, good awareness, checking players get scored on the first goal.”

Again — these are issues that are easily avoided, yet the Bruins are doing them against the worst possible team to do them against.

On the offensive side of things, the Bruins have struggled the entire series at one particularly important aspect: capitalizing on a limited number of chances.

It’s well-documented that the Lightning aren’t giving any free passes to the slot in front of their own net, so it’s up to the Bruins to make sure that when they get a solid open look, they cash in.

“I thought we deserved a better fate in terms of what we created,” Cassidy said in terms of the offense. “As I said, if you’re going to be off net, you’re not going to score, and that was our problem tonight, with some good looks we were off net.”

The Bruins had no better look in Game 4 than David Pastrnak’s one-timer that narrowly missed a wide-open net just four minutes into the third period.

“We just have to get the shots through,” Krejci said. “There’s no excuse for it.”

It’s plays like Pastrnak’s miss in Game 4 that are ultimately a huge reason why the Bruins find themselves on the brink of a flight back to Boston. By Game 4’s end, the Bruins had 30 total shots and nine high-danger chances for, yet only had one goal to show for it. Game 2 had a lot of the same as well in terms of not finishing good, open looks.

“I think it’s just the mentality, a shot mentality,” Coyle said. “Find the lanes to just get it through, either from our D or whatever the case is. We have to have bodies there and outwork them in front of their own net.”

The Bruins must correct these mistakes fast. The Bruins have to rattle off three straight wins against the Lightning to keep their Stanley Cup aspirations alive.

That is a very tall task.