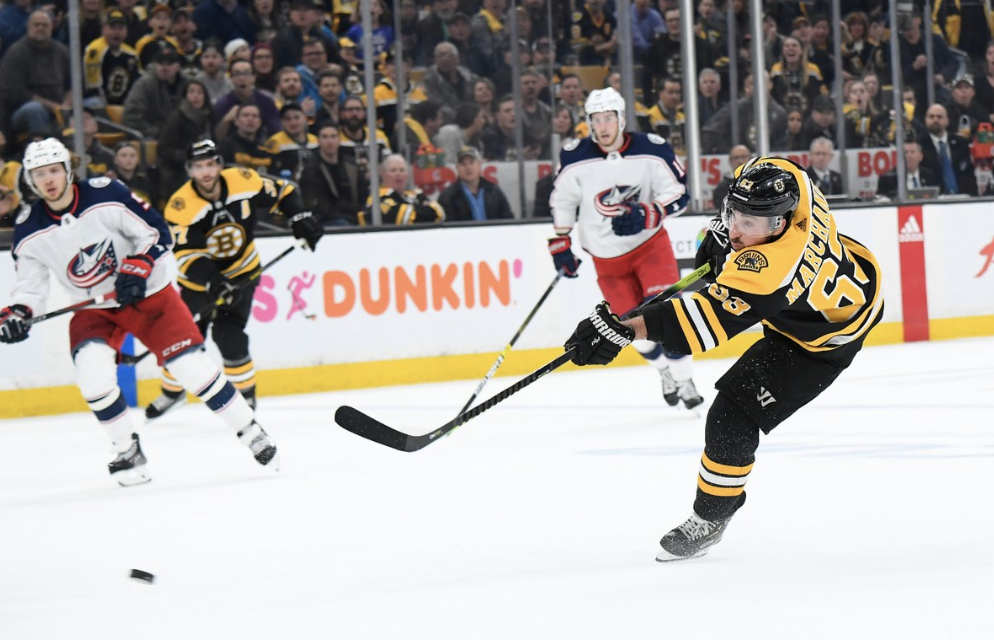 BOSTON — From the opening drop, the Bruins were better than the Blue Jackets Thursday night in Game 1 of their Eastern Conference semifinal series.

They were quicker on their skates, faster to the puck and generated far more scoring chances in the first period.

Not only did they outshoot the Blue Jackets, 14-4, they out-chanced them, generating 70 percent of the scoring chances in the period and in the game. Even when the Blue Jackets had the man advantage, which they had twice in the opening 20 minutes, it was Boston who was the faster and stronger team. The Bruins looked sharper following their Game 7 win Tuesday than the Blue Jackets, who were off for eight days following a shocking four-game sweep of the President’s Trophy winners from Tampa Bay.

“I thought we played well enough to win. I thought we were clearly the better team in the first period,” said Bruins coach Bruce Cassidy. “The residual effect of the emotional win in Game 7. They had time off. That can go either way. Usually, it’s hard to find your game when you have that much time off, the intensity level. I believe it’ll help them in the long run, obviously, with the rest. You get to heal, so we tried to take advantage of that early.

“We stuck with it. I think every game is important, but when you play well, and if it had not gone our way tonight, you’re going to be a little hard on yourself because we felt it’s one that we maybe – I don’t want to say gave away because that’s disrespectful, but one that we were the better team and don’t win, so those are always tough.”

Charlie McAvoy poked the puck away at the Bruins blue line on a penalty kill and there was Noel Acciari along the far boards at center ice to carry into the Columbus zone on a short-handed chance. He fired a puck that beat Sergei Bobrovsky far side and it was 1-0 Bruins. For those looking for a promising omen, it was Bobrovsky the Bruins beat (with Philadelphia) in this same round in 2011 on their way to their sixth Stanley Cup.

Despite the Bruins outplaying, outskating and outchancing the upstart Blue Jackets, Columbus was in the game because “Goalie Bob” was on his game. He single-handedly kept Columbus in the game, holding Boston to just that single goal through 40 minutes.

“I don’t think they had much puck luck, to be honest with you, in the front of the net,” Cassidy said. “Early, he made some big saves. They got some puck luck.”

Added Columbus coach John Tortorella, “You saw our struggles in the first. We couldn’t handle the tempo of the game, or we just weren’t thinking quick enough. I don’t know how you can get that. We just couldn’t simulate that as far as trying to get ready, and you’ve got that team coming on a high, but I think we slowly got about our business and found our game. We’ve just got to be ready to start the next game.”

Boston’s margin of error was minimal because, for all of the chances and quality play, they couldn’t finish. And their first big mistake was when Charlie Coyle took the puck from the neutral zone into the Boston end to cycle for a change. He turned the puck over and the Jackets capitalized when Brandon Dubinsky re-directed a Seth Jones shot from the left point past Tuukka Rask for a 1-1 tie with 12:21 left in the third. Just 13 seconds later, Boston fell asleep on the face-off and Pierre-Luc Dubois gave Columbus the 2-1 lead. But with 4:35 left, Coyle atoned when he took a pass from Marcus Johansson and beat Bobrovsky to tie the game, sending it to overtime.

Coyle finished off his night of redemption in the grandest way by tipping in a perfect pass from Johansson just 5:15 into overtime for the 3-2 winner and a 1-0 series lead.

“You want to come out in overtime and push them back on their heels and make them doubt their breakouts, make them doubt making plays and just try to force them to just dump the puck and that way we have control of the momentum,” Torey Krug told me. “So, it’s definitely key to try and establish more forechecks and capitalize on the chances and we were lucky enough to get the goal.”

The Bruins flirted with danger Thursday, not finishing countless chances because they were up against a hot goalie that had just led the biggest first-round upset in Stanley Cup playoff history, sweeping away the 128-point Tampa Bay Lightning.

But the main takeaway from Thursday night should be this: The Bruins are the better team. They are more skilled, deeper and have just as good a goalie as the Blue Jackets. That is the plain truth. The Bruins won 49 games for a reason while the Blue Jackets got red-hot at the end, wound up with 47 wins to scratch into the playoffs. But Cassidy did offer a warning about reading too much into a Game 1 win in the second round.

“We lost Game 1 and won the series against Toronto. Last year, we won Game 1 against Tampa in Round 2,” Cassidy noted. “We didn’t win the series, so it’s one game. We turn the page tomorrow, take the good, and work on the bad, and hopefully you’ll be ready for Game 2, and it’ll be just as good.”

The Bruins have a chance to re-affirm their superiority Saturday night at TD Garden before traveling to central Ohio. A win would go a long way toward cementing a feeling most had coming into the series: The Bruins are simply the better team. Now, the Bruins need to embrace the task of proving it three more times.