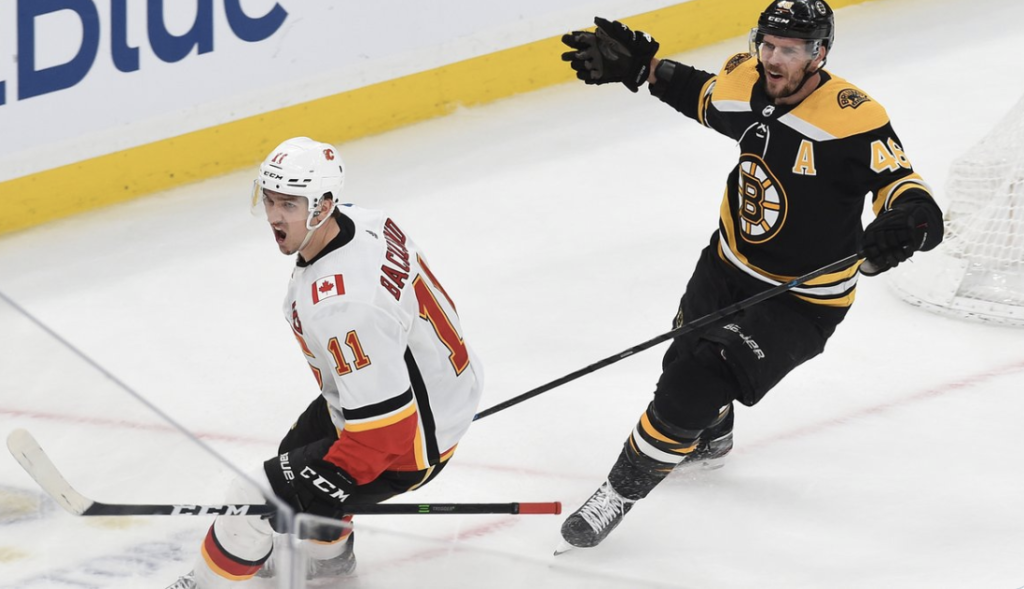 BOSTON – Call it his “Welcome to Boston” moment.

Nick Ritchie came barreling into the offensive zone where he sized up another big forward – and former Bruin – Milan Lucic between the circles. Lucic had just played the puck when Ritchie came in and did what he was brought to Boston for, be a physical offensive force.

The irony was rich. Ritchie making his first big hit in black and gold against a guy whose physical presence helped the Bruins get hot in the 2011 playoffs and lead Boston to their last Stanley Cup title, exactly why Don Sweeney brought the 6-foot-2, 230-pound forward to Boston in his only deadline day deal Monday.

Only problem Tuesday was Ritchie didn’t have many chances in the other role, as a net-front presence. As a matter of fact, most of the Bruins didn’t show up offensively Tuesday night as the Flames blew out the Bruins, 5-2, at TD Garden.

“Clearly not good enough. I thought some guys came to play and some guys didn’t. Didn’t break a sweat, some of them it looked like,” a stern Bruce Cassidy surmised afterward. “I’m sure there was effort, they were trying, they were just in between, couldn’t execute or whatever. But at the end of the day, it wasn’t good enough.”

Ritchie also learned early what many in Boston already know about coach Bruce Cassidy. He’s not afraid to change things up, even midway through the newcomer’s first game in Boston.

Ritchie was on the ice for the opening face-off with his expected linemates of center Charlie Coyle and right wing Anders Bjork. But with the Bruins struggling to find any offensive rhythm, especially on the second line, Cassidy moved Jake DeBrusk down to the third line with Coyle and Bjork and promoted Ritchie up to the second line with David Krejci and Karson Kuhlman.

“I didn’t see much energy, much offense, much willingness to recover pucks,” Cassidy said. “The Coyle line had a rare off night. They were just fighting it, so you try to kind of mix it up a little bit. [David] Krejci and [Jake] DeBrusk haven’t produced a whole lot lately, so it’s just get a guy away from a guy for a while, see if it loosens them up. Sometimes it works; tonight, it did not.”

“I thought he was fine. I’m not going to judge him on a — he flew in here (Monday). He’s trying to get acclimated,” Cassidy said. “There has to be a decent amount of period before we see what we got, and then go from there. I’d rather not, I’d rather watch some tape and see if, did he finish checks, did he get inside? Some of the details he’s going to bring to us. Rather look at the whole group, and we just did not have our — the guys we rely on to play, play well, had a tougher time tonight. And it kind of showed up in the end.

Ritchie finished with no shots and seven hits in 14 minutes of ice time.

Cassidy knows full well that Ritchie and his fellow former Anaheim teammate Ondrej Kase will need some time at least to mesh with the new lines in Boston. The basic mission for Cassidy will not be to put both players on the ice and expect immediate results but see which players work best with which players already entrenched in the Bruins system.

“Listen, you give him a chance to start. He’s going to get on the ice eventually anyway. That was, they just had [Matthew] Tkachuk and Lucic, so you put him out there in case if they want — I think Luc is more about being a body, playing here than anything. But if they want to play that type of game early, then we want to be prepared for it and have Zee [Zdeno Chara] back there as well and be ready to bang. But that was the thinking there, certain matchups you’re looking for throughout the game. To be honest with you, I don’t know that we ever truly got them tonight where they were in our favor.”

Boston’s only offense Tuesday, a somewhat predictable pancake-flat effort after a West Coast trip, came on a fluky bounce at the Bruins blue line that wound up on the stick of Brad Marchand. He made his way down the ice and beat David Rittich for a game-tying, short-handed goal to make it 1-1 in the second period.

Wait … make it 2⃣1⃣ goals on the year for Mony. pic.twitter.com/NBt8TQ6QgX

The Bruins managed an even strength goal from Chris Wagner midway through the third to cut Calgary’s lead to 3-2, but even then there was not enough juice on this night.

Ritchie could’ve come out Tuesday and produced a Gordie Howe hat trick (goal, assist, fight) and gotten the crowd roaring and everyone would be singing Sweeney’s praises. But if Tuesday showed anything, it’s that it’s going to take time for Cassidy and the Bruins to learn where the new pieces fit best.