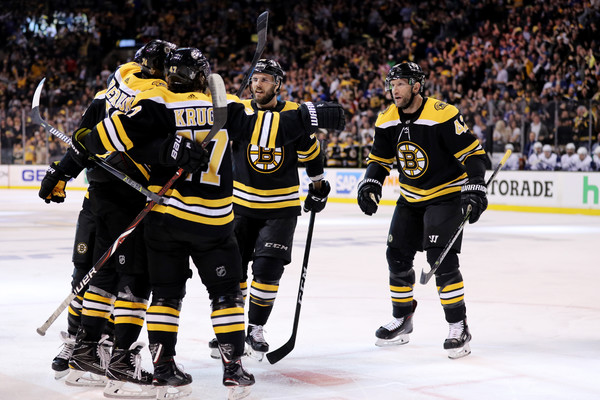 When it comes to Pro sports towns no city comes close to Boston. Ten Championships among the Big-4 sports teams since 2001. Presently, all four teams (Patriots, Red Sox, Celtics, Bruins) can be considered legitimate title contenders if not outright favorites in their respective leagues.

The Bruins had an incredibly exciting year, surpassing most people’s expectations. With a perfect blend of electrifying, unknown rookies and battle-tested veterans, the Bruins skated to 50 wins and 112 points, good for second in the Eastern Conference.

But for all their success, you can’t help but feel the B’s are lagging behind their Boston brethren in terms of popularity. Something Bruins President Cam Neely talked about on Wednesday.

“It’s not for me to really say where we stand among the four teams,” said Neely. “You have the Celtics and good on them,  they’re playing extremely well. The Pats obviously had a successful season last year. The Red Sox are just getting into it.”

Neely might be understating things a bit. The Patriots and the NFL are the unquestioned King and there’s no competing with them. The other three teams fight for the remaining – yet still sizable –  scraps. The Red Sox used to own the town and their broad popularity still places them in second. Which leaves the Bruins battling with the Celtics for winter sports dominance. When the playoffs began it appeared the Bruins had higher Championship aspirations, but they fizzled while the surprising Celtics are just two wins from the NBA Finals.

“Obviously, not quite doing what we thought we could do in the postseason, but I think our style of play has been very exciting. Those are the comments I got all year from our fans was how exciting it was to watch us play.”

According to the Sports Business Journal, the Bruins ratings dipped by 2 percent this season but were still 5th highest in the NHL. The Celtics saw their ratings rise by 44 percent, second highest jump in the NBA. The Red Sox ratings are up 20 percent this season

And the Pats, well no one can compete with the Pats in ratings or popularity.

In the last New England Sports Survey, the Patriots were listed by 51 percent of respondents as their favorite team. The Red Sox were a distant second at 24 percent. The Bruins just beat out the Celtics, as they polled at 13 percent while the boys in green polled at 10. That survey was however taken prior to the Celtics trading for Kyrie Irving.

But while the Bruins may not have as many fans as the other three sports, there’s have always been among the most loyal.

“The thing for me is, I know we have a very hardcore fanbase,” began Neely. “And they’re very passionate about the Bruins, very passionate about hockey, and I think we added more of those fans to our sport this year. I thought the way we played was very exciting. Our home record was as good as its been in a long, long time.”

And while they may be 4th in the City, there’s plenty of love to go around.