Bruins Game One Win Over Leafs Was Something Special 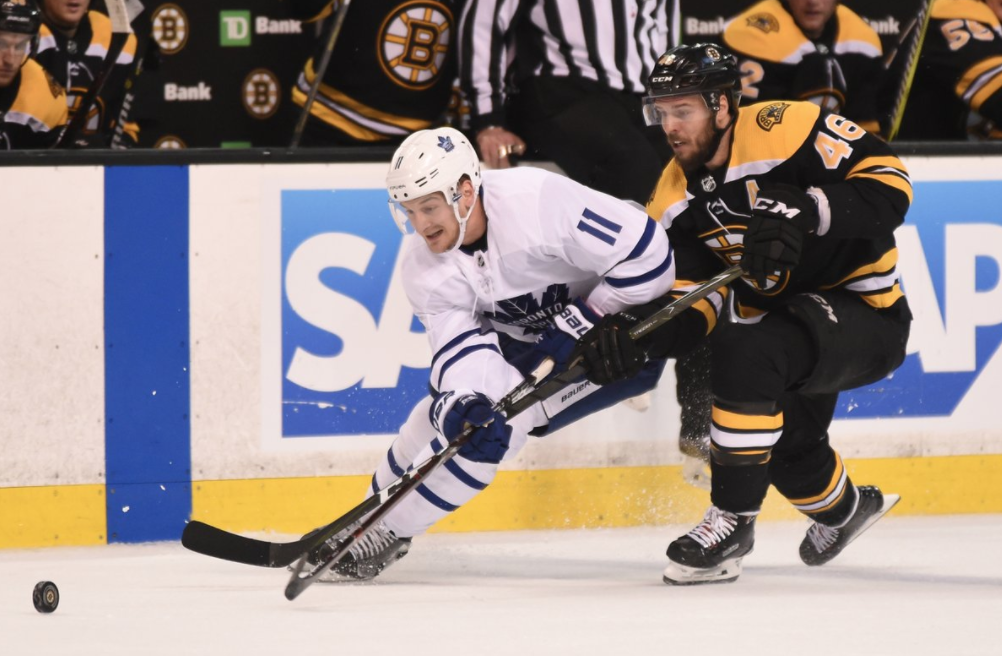 BOSTON — On a night when the Bruins scored three power play goals, it was a key penalty kill that might have turned the tide in Game 1 against the Leafs.

The Bruins were in danger of allowing the visiting Leafs to gain their footing and sneak out of the Garden with a Game 1 win.

Then the Bruins penalty kill showed up.

After an electric opening 10 minutes in which the Bruins clearly carried the play and a 1-0 lead on a typical Brad Marchand power play score 5:28 into game, the Leafs collected themselves and tied the score, 1-1 when Zach Hyman beat Tuukka Rask with a backhander with 4:17 left in the first. It would be Rask’s only blemish of the night.

Still the Leafs went to the dressing room after 20 minutes relieved to be tied. It looked even more promising for the visitors in the second when Zdeno Chara (59 seconds) and Danton Heinan (6:49) took minor penalties. Those two penalty kills set the stage for the power play flood gates to open wide in the final five minutes of the second period.

“Well, ultimately it was the difference,” Bruins coach Bruce Cassidy said. “Clearly, in the first half of the game, you don’t know how it’s going to play out at the end. They took a major, so that obviously forces you on the kill and expend a lot of energy defending as opposed to scoring. So, when you’re behind, that’s a problem. But, early in the game, I thought our kill was good. We got some breaks around the net.

“Looked like there were some pucks there that could have went either way. I know Adam
McQuaid saved one and a couple of good sticks there, and Tuukka [Rask] some big saves. So, we got through it. Then our power play, we had a good entry and Marchy made a good play. We had a lot of speed on the entry and that’s what you need against this kill. Then Krech [David Krejci] made a good low play and we finished around the net. That can be a little bit of a difference; we finished one, they didn’t. So, it goes the other way, you don’t know how the end is going to be, but from there I thought we were a good team, played the right way, and we were able to bring it home.”

The best penalty kill might have been Tuukka Rask. The last line of defense stopped 26 of 27 shots overall, re-gaining some of the lost momentum from late in the season.

“Well, I stopped more pucks I guess,” Rask said. “You know, regular season is over. You know, I don’t even think about that anymore really. It’s playoff time now, just stay focused and battle hard. You know, it’s a different kind of game out there. Intensity picks up, and I think you have to match it as a goalie too. Stay ready at all times, so I think everybody on our team was ready to play today. That was a good sign.”

David Backes was on the doorstep and took a great pass across the low slot from Krejci for the tie-breaker at 15:43 of the second and a 2-1 Bruins lead. David Pastrnak scored with just 38 seconds left in the period on a laser of a wrister that beat Frederik Anderson top shelf and the Bruins were in control 3-1.

The Bruins finished 3-for-6 on the power play, with Krejci adding a final tally on the man advantage late to make it 5-1. They also killed all three Toronto power play chances.

“You know to be honest we had a good last couple days, especially (Wednesday) we were working in practice and we had video about their PK and what to expect,” Krejci said. “We ran some plays (Wednesday) and we tried it today and it worked. We’ll get back to it tomorrow and look at more video, more and more stuff that we can do and hopefully we can keep it going on Saturday. Our pk did a really good job and our power play helped to win the game tonight.”