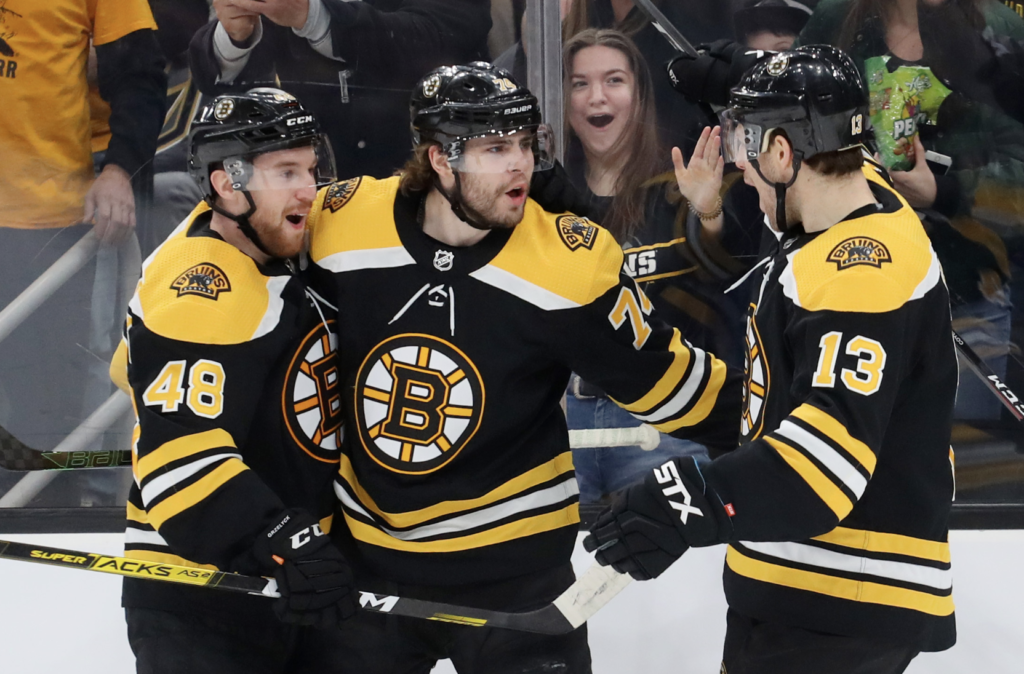 BOSTON – All any coach with championship aspirations ever wants for his team is to be in a good place heading into a well-deserved week-long break.

The Boston Bruins qualified for that place of good standing with Bruce Cassidy Tuesday night after they came from behind from a 2-1 hole heading into the third period to post a 3-2 win over the Vegas Golden Knights at TD Garden.

“The state of the team is I think we’re in a solid position,” Cassidy said. “I don’t think anything has been given to us. I do believe there’s room for growth for that 60-minute effort from start to finish. Health wise, we’re trending well. Tuukka [Rask] skated today, looks like he is going to be fine, so that’s very important. I’ve got to get a report on Charlie [McAvoy], went into the boards, and Grizz [Matt Grzelcyk] late, so let’s see what’s happening there. Now, you’ve got a couple of young guys that we feel is pushing the group.”

There was plenty to feel good about as they head into the break with a lot of good news.

First and foremost, Cassidy’s Bruins are 29-10-12, good for 70 points and first place in the Eastern Conference. Only Washington (71 points) has more in the NHL.

Boston ironically wiped out a third-period deficit to post the victory, the opposite of one of the problems that has plagued them in stretches in the first half. They have blown multiple goal leads in six games, winning just one of those six in which the lead disappeared.

The Bruins didn’t let Sunday’s 3-0 blown lead stay fresh in their mind Tuesday, getting the win despite a power play that was scoreless in five chances, with just three shots on goal and despite giving up the first goal for the 18th time this season. Remarkably, they are an NHL-best 11-3-4 in those games.

“If you watch around the league, this has been a crazy yeqr for comebacks,” DeBrusk said. “It’s not just us. It’s not an excuse. Obviously, you want to close games out, especially when you have multi-goal leads but obviously, it’s going to be a theme. First, you have to get the multi-goal lead and then go from there.”

The Bruins had the right mindset heading into a weeklong respite, a break that will include a trip to Puerto Rico for stars like Patrice Bergeron, Jake DeBrusk, Sean Kuraly and others.

“Good pros. Doesn’t surprise me. Our guys are good that way, and I think the way we finished in Pittsburgh probably gave us a bit more focus,” Cassidy said. “Who knows, if that had been a clean game and we just, you know, ran it, and like we did the other night, play solid from start to finish, who knows?

“Maybe they would’ve started to wander because there is a little content. So, I think it was two things: A, those guys are professional in there. I thought yesterday’s practice was hard and good and good compete, so they understood that we’re not going to ride it into the streak; every game is important, and again, the Pittsburgh result probably didn’t sit that well with some guys, and typically when that happens, the next game, you’re ready to go, and I thought we were in the first, ready to play.”

The Bruins have been looking for scoring depth for the better part of the first half with David Pastrnak (37), Brad Marchand (21) and Patrice Bergeron (21) accounting for 79 of the team’s 166 goals entering Tuesday.

Cassidy wondered openly about the wall the Bruins might hit this year after playing through to Game 7 of the Cup Finals on June 12. Through 28 games, it didn’t look like there were any such concerns. They were 20-3-5 and already running away with the Atlantic Division.

“Coming into the season, knowing there’s a target on our backs, it’s going to be usually the other team’s best night,” DeBrusk told me. “It seems like there haven’t been too many games where it’s been lopsided. Everyone comes in and gives us a really good game. We understood that.

“Our start was obviously what we wanted. We didn’t expect that. Then, throughout the season, we’ve kind of been putzing along there. We’ve been on top of our division pretty much the whole year. We’re obviously happy to be in that position. You don’t want to be out of the playoffs. There’s still lots of time left but there’s lot of work left for this team. With the recent stretch that we’ve had, we haven’t liked that at all. It’s always nice to head off into the break with a win.

“People talk or you guys (media) talk but we know how we want to play,” Krejci added. “We know if we’ve played good or bad but at the end of the day, we’ve got 70 points, sitting on top of the division so obviously, we’re happy with where we’re at, but now we know the stretch is going to be the most important. Now is the time to enjoy the break, come back and start where we left off.”

“That’s his kind of goal, he can separate and shoot in stride and shoot it past a goalie,” Cassidy told me. “What happened in the second period there, looked like there was a few net-front opportunities for three or four guys who weren’t able to finish.

“We talked about that between periods, you will get some rebounds from [Marc-Andre] Fleury, and you’ve got to work to get inside and [David] Krejci gets one going there, and I think [Anton] Blidh had a chance and a few others. Eventually we stuck with it. But good for Jake, that got everyone excited and that’s something he can bring and has been of late.”

Of course, there’s more irony as Bruce Cassidy will coach the Atlantic Division roster this All-Star Weekend in St. Louis, in the same building where the Bruins won Games 3 and 6 of the Stanley Cup last spring before falling in Game 7 in Boston.

But with most of the team taking time off to rest and heal, hockey won’t be first and foremost on many players’ minds over the next week. And it shouldn’t be. Rest up Bruins, the real test awaits.