Jim Montgomery has won at every level and developed young talent well. 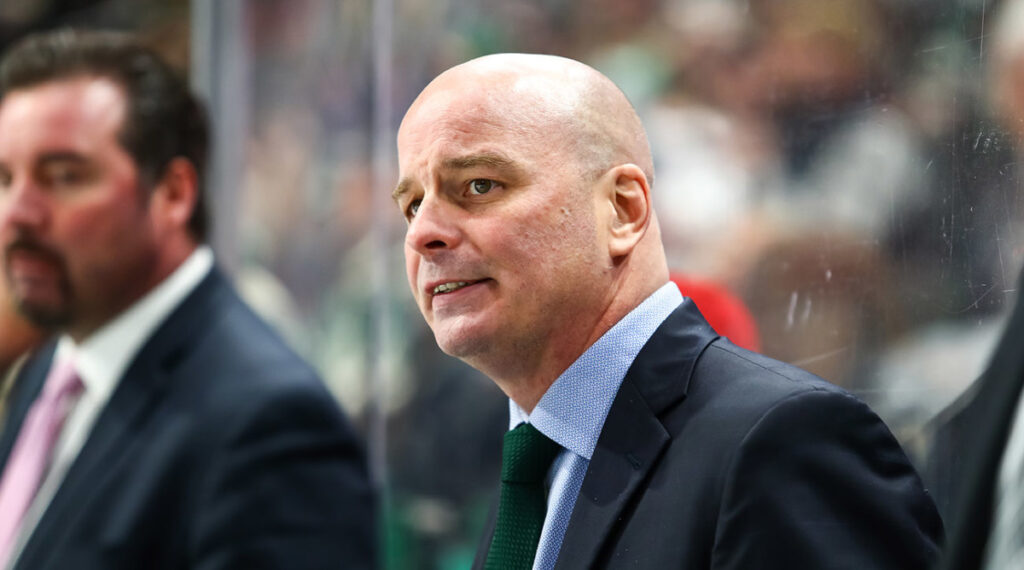 The Bruins finally have their man and they got the right one.

The Bruins will hire Jim Montgomery as the club’s next head coach, according to multiple reports. Filling Bruce Cassidy’s shoes won’t be easy and attempting to do so with this lineup, one plagued with big injuries and salary cap-constraints, won’t be easy either. But of the candidates the Bruins looked at, Montgomery makes the most sense.

The direction of the Bruins isn’t fully clear yet. Whether they embrace a full rebuild, go for a quick retool, or run it back for another Stanley Cup push isn’t completely known. The likely return of Patrice Bergeron certainly swings the pendulum in one direction more than the other.

But the direction doesn’t really matter when it comes to Montgomery.

One of Montgomery’s chief tasks will be to stimulate the growth of Boston’s plethora of young forwards in the system such as Jack Studnicka, Oskar Steen and Trent Frederic. Part of that will be giving them chances to breathe inside the big club’s lineup — something the organization felt Cassidy wasn’t great at. He’ll also be tasked with guiding the development of former first-round picks Fabian Lysell and Johnny Beecher, as well as standout defenseman Mason Lohrei when they make it to Boston.

Will Montgomery definitely turn Studnicka, Steen, Frederic and others into full-time, contributing NHL players? It’s hard to make that bold of a prediction before the sun has even risen on Day 1 of the Montgomery administration.

But based on his track record, Montgomery is the best man for the job.

In his one and a half seasons with the Dallas Stars, he oversaw the pro development of superstar defenseman Miro Heiskanen, winger Roope Hintz and centers Devin Shore and Jason Dickinson.

His time coaching Denver in the NCAA was highly successful. Montgomery led the Pioneers to a record of 125-56-26 for a winning percentage of .662. He went to two-straight Frozen Fours in 2015-16 and 2016-17. Denver emerged national champion in the spring of 2017. He won two championships with the Dubuque Fighting Saints in the USHL between 2010-2013.

So, if the Bruins decided to usher in a rebuild or retool, Montgomery has that covered given his success with younger players. The 53-year-old can also best position Boston to win if the order is given to run it back for another Stanley Cup.

Montgomery only logged about one and a half years as the Stars’ bench boss before being dismissed in December of 2019 due to problems with alcohol. He checked himself into rehab in January of 2020 and since then, seems to be doing much better. He’s been an assistant on Craig Berube’s staff for the St. Louis Blues since September 2020.

Montgomery’s won titles in the USHL and NCAA, and had Stars trending in right direction. He’s run STL PP that ranks second to only EDM since he took over in 2021. Considered a player’s coach.

In those one and a half years, he turned around a Stars team that missed the playoffs in 2017-18. He went 60-43-10 over 113 games. The 2018-19 Stars upset the No. 1-seeded Nashville Predators in Round 1 and lost to the Blues, the eventual Stanley Cup champs, in seven games in the second round. The 2019-20 Stars went on to make it to the Stanley Cup Final in the bubble with then-head coach Rick Bowness. Montgomery’s fingerprints were still all over the squad.

What is concerning about that one full season in 2018-19 is the Stars’ lack of scoring. They ranked in the bottom three of the league in goals for. But they more than made up for that lack of finish in special teams and defense.

Stylistically, Montgomery crafted a clear message upon arriving in Dallas.

“Be aggressive, make mistakes out of being aggressive,” Montgomery told Stars players on Day 1 of training camp in September 2018.

Throughout his time there, that’s what they did — the Stars closed on teams quick and forechecked hard. They forced other teams to make mistakes and turned the play the other way immediately. Under Montgomery, the Stars were a puck-possession team and when breaking out of their own zone, they did so methodically based on what the other team’s defense was giving them.

The Bruins certainly could use a large dose of that speed Montgomery instilled in Dallas.

Scoring should be easier to find with this roster. David Pastrnak, Taylor Hall, Bergeron and a healthy Brad Marchand should take some of the pressure off the first-year head coach. The challenge will be cracking the code to get more consistent secondary scoring. That ties in with getting the younger players to produce positively on the ice when in the lineup.

A big question Montgomery faces will be what he does with Boston’s top six. Cassidy finally made the switch to move Pastrnak down to the second line to spread out scoring midway through last season. The move paid off until late in the Bruins’ first-round series with the Carolina Hurricanes.

Based off Montgomery’s comments from a few years ago, the three-headed monster getting put back together isn’t out of the question.

“On a line, a scorer needs to go with a puck possession guy,” Montgomery told the Dallas Morning News in November 2018. “Ideally, that third guy is a puck possession guy that does all the details and the habits right that create turnovers for the other two to do their magic…If you look at Boston’s line, Pastrnak is a sniper. Bergeron and Marchand are both puck possession and incredible puck pressure guys. That’s why they’re one of the best lines, because they’re consistent with their habits and their details.”

These are questions and decisions that Montgomery will face in the coming weeks and months. But no matter the direction, the Bruins got the right coach for the job.