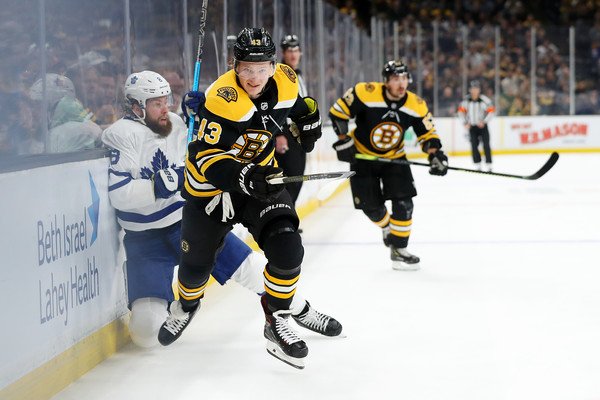 The story of the offseason for the Boston Bruins is what they do with their salary cap problem. There’s very little space for too many solid players.

On Tuesday night, the Bruins announced they re-signed Danton Heinen, one of those solid players, to a two-year deal with an average annual value of $2.8 million. This signing gets both the Bruins and Heinen to avoid their recently scheduled arbitration date.

Heinen’s spent two complete season with the B’s. His best came in 2017-18 when he tallied 16 goals and 47 points. In 2018-19, his production dipped just a bit, as he only scored 11 goals and 34 points. Despite the drop in points, Heinen did find a home on the third line this past season with Charlie Coyle and Marcus Johansson. On the way to losing in the Stanley Cup Final, Heinen totaled two goals and eight points in 24 playoff games in 2019.

Now comes the hard part for Don Sweeney and the Bruins — with approximately $7.3 million in cap room, how do they re-sign both Charlie McAvoy and Brandon Carlo?

The easiest contracts to trade right now on the Bruins are Kevan Miller and John Moore. Miller has a year left on his deal with an AAV of $2.5 million while Moore has four years left with an AAV of $2.75 million.

And then there’s David Backes with a cap hit of $6 million in each of the next two seasons. If the B’s were to send Backes to the AHL, it’d give them $1.075 million in cap relief. That doesn’t seem like something they’d do because it’s not enough of a savings to justify sending a 35-year-old assistant captain down to Providence. Backes has earned the right to stay in the NHL.

Don Sweeney is going to have to work some magic to pull this one off.