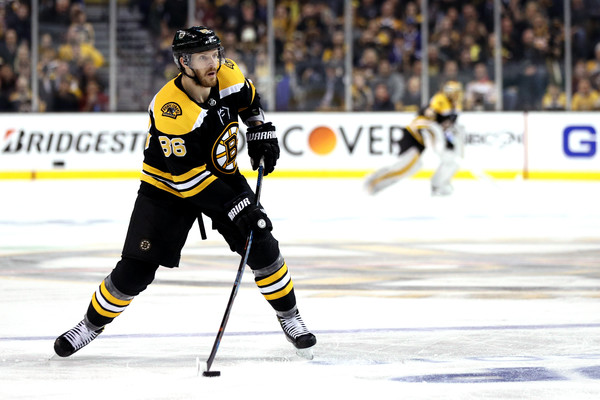 BOSTON, MA — Over the past month, the Boston Bruins have fallen victim to the injury bug. From Charlie McAvoy, to Patrice Bergeron, to Zdeno Chara, the Bruins might as well cover themselves in bubble wrap.

The Bruins announced today that defenseman Kevan Miller would be out for five weeks with a throat injury. The injury came after taking a puck to the throat in Monday’s 4-2 loss to the Toronto Maple Leafs.

At look at the play that forced Kevan Miller to miss the end of the first period. Weird bounce off the initial shot by Tavares. pic.twitter.com/jo7vwKV8XS

The team said Miller received a CT scan that showed a cartilage injury to the larynx. The puck to the throat will keep Miller sidelined until at least January.

This particular injury comes at a bad time for Miller and the B’s. With Chara and McAvoy already out, the loss of Miller leaves an even more depleted core of d-men. Miller recently returned from a 13-game absence due to a broken hand.

In the four games since the broken hand, Miller was heavily leaned upon by the B’s, averaging 19:56 time on ice.

But it wasn’t all bad news on the backend for the Bruins Wednesday. D-man Brandon Carlo is expected to return to the B’s lineup within the next two games. Carlo’s been out since Nov. 10th with a shoulder/collarbone injury.

On the offensive side of things, rookie Ryan Donato was recalled to the big club from Providence. This comes after a stretch of six games that saw the B’s go a solid 3-1-2 but only score 11 goals.

Donato kicked off his Bruins season badly, only scoring once in 11 NHL games. But, in the 10 games he was in the American Hockey League for, the Harvard product posted five goals and four assists.

With Anders Bjork struggling, it doesn’t come as much of a surprise to see Cassidy give Donato the call. Even though he went down to Providence to work on the little things, the Bruins need someone who can find the back of the net.