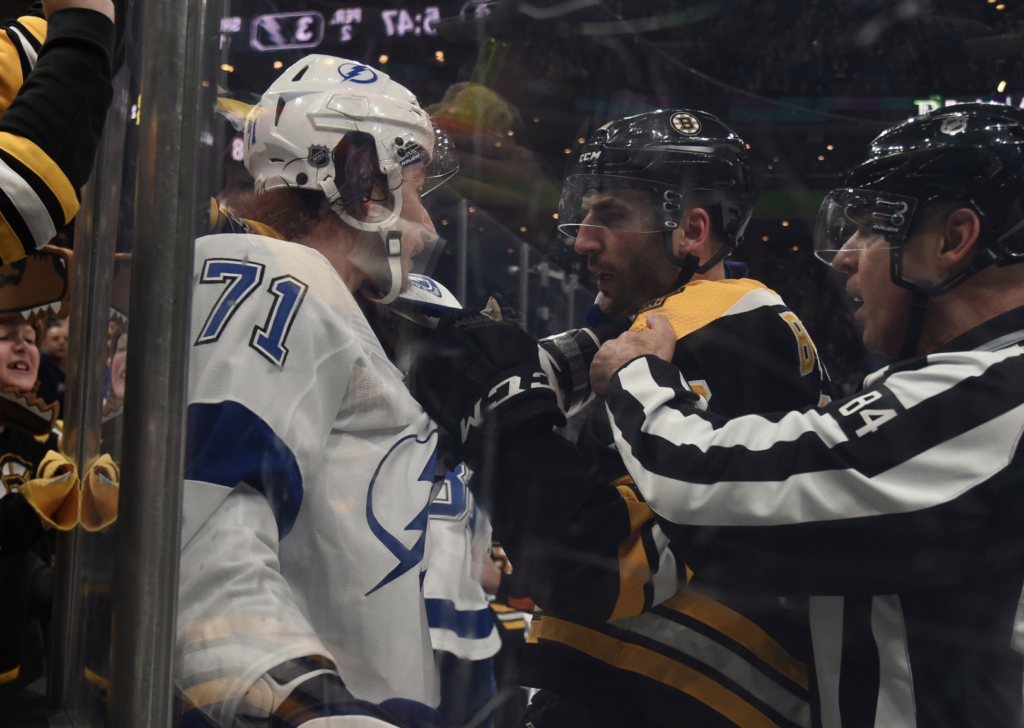 BOSTON – If this week was the calling card for a potential playoff encounter, the Bruins and Lightning, hockey fans can look forward to an intense, hard-hitting series between two teams who have now built up just the right amount of disgust for each other.

In other words, the Bruins and Lightning in a best-of-seven is exactly what hockey needs.

Saturday night was everything you want in a matchup of the top two teams in the Eastern Conference. Fights, hard hits, spectacular goaltending, near miss after near miss, sticks flying up in the air, more fights, and the obligatory David Pastrnak goal.

In the end, the Lightning held on for a 5-3 win over the Bruins at TD Garden. But to the Bruins, this was less about the final result and more about attitude they brought when they faced adversity, as they still hold a seven-point lead (98-91) for the top spot in the Atlantic Division, and by default the Eastern Conference.

For a team that had 42 wins entering Saturday, the Lightning played like a desperate team that was trying to prove to themselves that they are capable of playing with the big, bad and talented Bruins while also showing they’re not the same crew that somehow last year choked in four straight to Columbus, blowing a 3-0 lead in Game 1 and never recovered.

They wanted to make that point in Tampa also, leading to that brawl at the end of the second period. The Bruins held Tampa scoreless in the third and skated away with a 2-1 win.

“I think it was more of a response, they wanted to be better,” Bruce Cassidy told me. “I thought we were the better team up there and they wanted to prove that — listen, I think both of us feel we’re the best team in the Atlantic. We went up there, got the two points in their building, they wanted to respond. And for the simple reason as that, that the rivalry has developed now between the two of us and you’re going to get some intense matchups. And that’s what you got tonight. And they were more ready to go off the puck drop than we were, and it ended up being the difference in the game.”

The score and result to the Bruins Saturday was practically irrelevant. It was how they responded when down 3-0, after their top goalie allowed two shorthanded first period goals.

The Bruins answered with a fury in the second period and it all started with Charlie McAvoy’s top-shelf goal to beat Andrei Vasilevskiy.

What happened with two minutes remaining in the second period can only be described as glorious hockey chaos.

With Charlie Coyle missing two golden chances and the Bruins buzzing all around the net, Boston managed to keep the puck in the offensive zone. As a stick flew up in the air in front of Vasilevskiy, the Bruins were rightfully staying focused on the puck. Eventually there was a scrum in front of the net, Sean Kuraly reached for the puck and flicked it from the mob and through a maze of bodies and past the Tampa goalie. The puck crossed the line but referee Kyle Rehman waved “no goal” and had play continue.

That allowed the bad blood to boil over a little bit more, as Zdeno Chara battled Pat Maroon, Alex Killorn flipped Charlie Coyle. As soon as Kuraly, who was finishing his shift, saw Killorn, he made a beeline from the bench. After apparently telling the bench what he was going to do, he charged Killorn and tackled him and the crowd erupted.

“It’s never been an issue that we don’t stick up for each other,” Tuukka Rask said. “We’re just showing it more going into playoffs.”

“Games like this are fun to be a part of,” Brad Marchand added. “Guys did a good job of sticking up for themselves and each other. But at the end of the night it’s two points and you move on to the next one.”

The next one will be Tuesday night on the road against the hottest team in hockey, the Philadelphia Flyers, who have soared to the top of the Metropolitan Division with their current nine-game win streak.

“There’s a value in sticking up for one another, there’s a value in responding,” Cassidy said. “Of course, there is. Some nights, it’s more important than the outcome. I’m not going to sit here and say one or the other, we’ll look through it, but we wanted to respond. There was a, we thought, a high hit early on [Ondrej] Kase. You know, he’s been out. We responded well and it was kind of on from there, the physicality part. So, I think both teams kind of went toe-to-toe in that regard, so yeah, there’s a lot of value in that. We pride ourselves on that. In fact, it was discussed earlier this year that we didn’t have enough of that, and I certainly feel we do. Certainly, tried to prove that tonight, and try to win the game at the same time.”

The crowd would get even louder during the stoppage as it provided time to review the Kuraly effort moments earlier. The ruling was the puck did indeed completely clear the line behind Vasilevskiy and it was suddenly 3-2 Tampa.

“Well, that’s our push, right? We feel we’re getting back into the game,” Cassidy said. “We’re getting hits, we’re getting some puck possession, we’re on the attack, we’re getting our chances, so we’ve got life. It’s energy. It’s happened to us in the past where it’s hard to get out of to clear pucks. You start losing races, you don’t get clears, you’re stuck in your own end, you’re fatigued, so that gave us a lot of juice. That was a big goal for us.”

The next 83 seconds nearly saw the Bruins score the equalizer.

Then, like Tuesday night in Tampa, the two teams couldn’t get off the ice for the intermission without exchanging pleasantries, including a costly Brad Marchand slash at the 20-minute mark. That penalty would lead to a Tampa power play goal and a 4-2 lead early in the third.

“Unfortunately, we took a penalty on the scrum at the end of the period,” Cassidy added. “I’m not even sure what happened with Marchy [Brad Marchand], but we end up in the box, they don’t. That took some life away from us on our power play, so the life we created kind of went by the wayside a little bit.

“They score on a power-play goal, and now you’re climbing uphill again. If it’s 3-2, I like our chances better. Once they got that fourth one, they’re a good team, and they’re probably going to find a way to put the game away, and sure enough, they did. Yet, David Pastrnak’s on a breakaway with the tying goal on his stick, so I thought there was a good effort to push and get the tying goal. Nordy [Joakim Nordstrom] on a shorty. They scored two shorties; we hit a post, so sometimes it’s a fine line and at the end of the day, we didn’t capitalize when we needed to.”

On the 26th anniversary of Cam Neely scoring 50 goals in 44 games, David Pastrnak entered needing a hat trick to become the first Bruin since that March night in 1994 to reach the milestone. Pastrnak fell two goals shy Saturday as his goal in the third period closed the gap to one goal, 4-3. But he had two other chances point-blank Saturday and couldn’t cash in.

“So, it’s a close game going into the third, there’s a maylay in the second. So, how are you going to respond? Bottom line is you gotta go out and win the hockey game,” Lightning coach Jon Cooper said. “I thought we played, aside from the Pastrnak breakaway, I thought we controlled that third period. We didn’t give them too much. Our power play came out big for us, but it’s not always how you respond physically.

“We did that part, but now go win the game. And that’s what they went and did, and so pretty proud of the guys for that. It’s an 82 game schedule. Most games aren’t like that, but some are. You’ve got a couple teams that have a little bit of history with each other, and it was entertaining. It was an entertaining, gusty game by both teams. We came out on top.”

Imagine a series full of games like Tuesday and Saturday night. We should be so lucky.