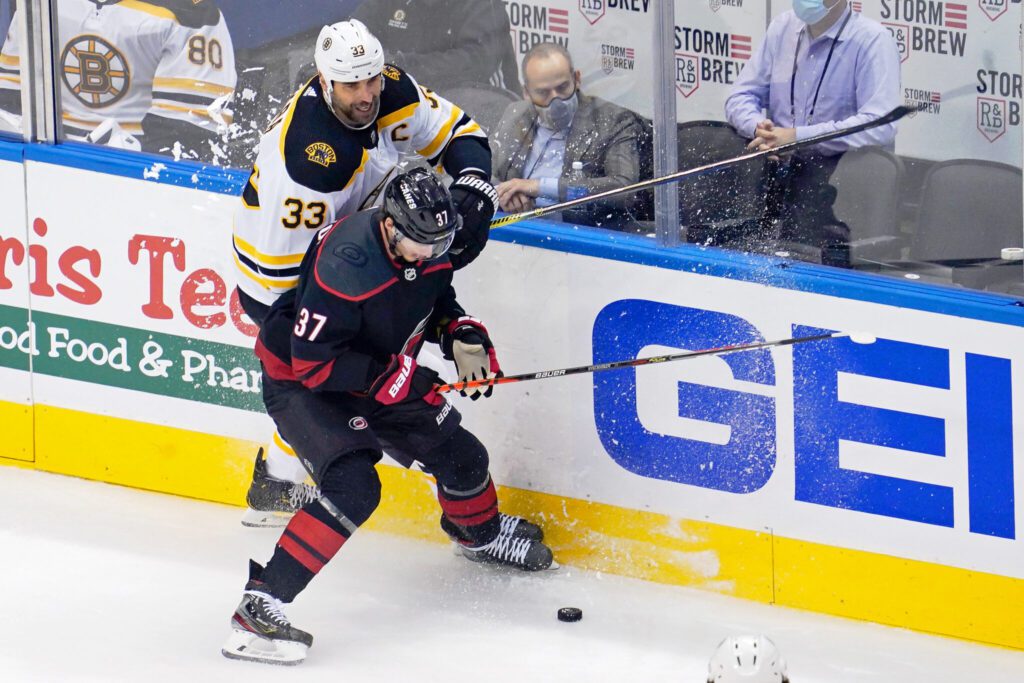 The Carolina Hurricanes are hoping for the best after Andrei Svechnikov was helped off the ice late in the third period during Saturday’s Game 3 against the Boston Bruins, but things don’t sound good.

Svechnikov got tangled up with Bruins captain Zdeno Chara in the offensive zone and went down awkwardly, possibly sustaining a leg injury on the play.

Hurricanes head coach Rod Brind’Amour provided an update on Svechnikov’s situation on Sunday, and he admitted he “highly doubts” that the winger returns for the playoffs, according to The Athletic’s Sara Civian.

If the talented young winger is out of Carolina’s lineup for the remainder of the playoffs, the Bruins will need to take advantage of a shorthanded Hurricanes squad.

Despite not tallying a single point in Game 3, Svechnikov recorded two shots on goal, five hits and two blocked shots in 15:58 of ice time.

In six playoff games, the 20-year-old has seven points (four goals, three assists) — two of those points (one goal, one assist) coming through three games against the Black & Gold.

During the playoffs at even strength, the line of Teuvo Teravainen, Sebastian Aho and Svechnikov has tallied five goals, and when they’re on the ice they have not yet surrendered a goal against. The line’s Corsi percentage is 52.43, which means the team is better off with them on the ice. They’ve taken 26 shots versus allowing 25 shots against.

When Aho and Teravainen play without Svechnikov this postseason at even strength, their Corsi percentage is 38.64 and they’ve allowed 17 shots against while taking just seven shots. They’ve also allowed two goals against versus one goal for.

Against the Bruins alone, Teravainen, Aho and Svechnikov have a 54.35 CF % and have taken nine shots versus allowing eight shots against. Although they have not yet scored or allowed a goal during five-on-five play, they certainly will take a hit if Svechnikov misses time.

Without Svechnikov, Aho and Tervainen have a 40.48 CF % in this series and have allowed 15 shots against versus taking just seven shots. They’ve also allowed one goal.

It’s no surprise Carolina will be missing the services of Svechnikov when looking at advanced metrics. He’s been a staple in the Hurricanes lineup since being drafted second overall in 2018.

If the Bruins get David Pastrnak back on Monday, the Hurricanes absolutely will be in trouble. Boston will have a tremendous opportunity to take a 3-1 series lead, and they’ll certainly have to dominate Carolina’s top line without Svechnikov if they plan to do so.

The Magic of the Isaiah Thomas Era with the Celtics