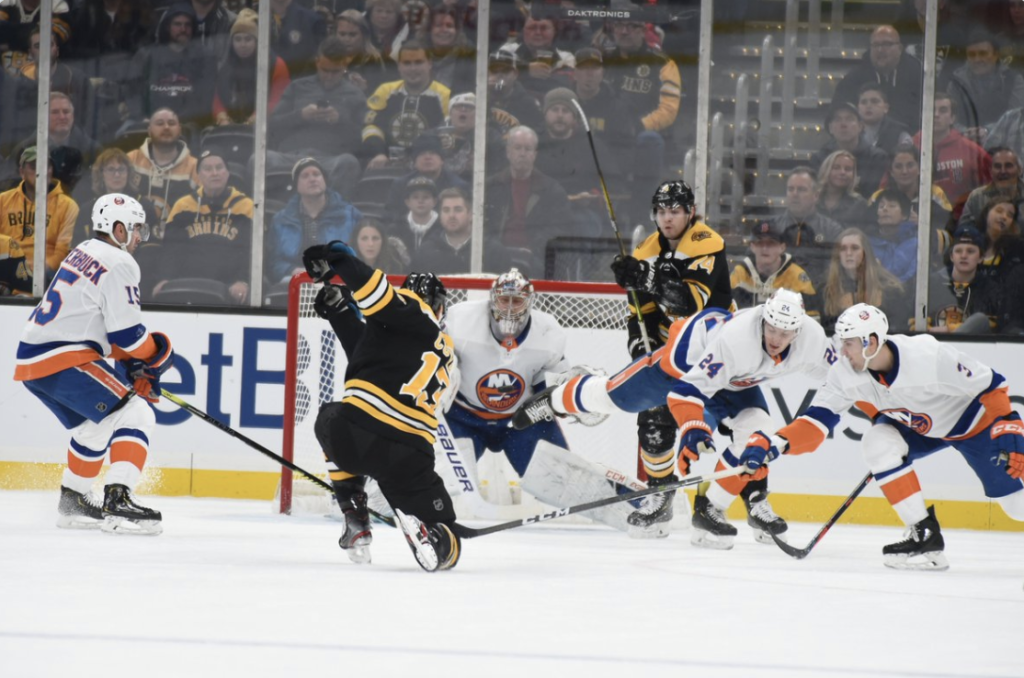 BOSTON — Bruce Cassidy is starting to see a trend that he wants to nip in the bud before it becomes a troubling longterm pattern.

Cassidy’s basic challenge – and the challenge of the urgency-challenged Bruins – is this: The Bruins lost for the seventh time in eight games, gained another point and now have an 11-point lead in the Atlantic Division of the Eastern Conference.

Their 3-2 shootout loss was a mirror image of most of the other seven losses in this skid, play just well enough to hang around at the end, force overtime and secure at least a point. In three of the seven losses, the Bruins have taken home a point. The Bruins are 0-5 in shootouts.

They showed, early in Thursday’s game, the potential for an early jump and a killer instinct. They scored just 1:58 into the game when Anders Bjork scored when a fortunate bounce landed the puck on his stick as the Islanders appeared ready to break out of the zone. The Bruins then went on a power play four minutes later when the Islanders were called for too many men. But the Bruins failed to get a shot on goal.

Except for a Bjork shot into the glove of Semyon Varlamov in the second period, the Bruins showed little signs of life and their coach took note. Cassidy also took note when former Bruin Johnny Boychuk ripped a shot from the right point 3:26 into the second past a screened Tuukka Rask.

“The first one is a goal we’ve given up too much lately. In Florida, from 58 feet, the other night against L.A., again tonight. Some of that isn’t the goalie working to find the puck, some of it’s boxing out, some of it’s on our forwards to get in the damn shooting lane,” Cassidy said. “I mean, this is part of our makeup of our team, and there’s certain players we expect that from. I don’t think there’s been enough of that, to be honest with you. You talk about urgency, to keep it out of our net.”

“You can’t say, ‘Oh, I’m going to wait for May to do that.’ It’s who you are, it’s in your DNA. We’ve got to get back to being who we are — certain players are just good at that, and I think lately we’ve gotten away from it,” Cassidy said in a cautionary tone. “Haven’t had as many blocks in those key areas — again, urgency to keep it out of your net, urgency to get the guy out of Tuukka’s way, urgency on the goaltender to fight to see it. I thought after that goal in third, Tuukka made a couple saves, I could see them from the bench.”

Ironically, things improved in the third period as the Bruins had to kill a penalty that had a minute, 44 seconds remaining. They opened controlling the puck in the Islanders zone for a minute.

Voila, urgency when the chips – and the Bruins – were down 2-1. The Bruins caught a break when Brock Nelson cleared a puck over the boards with the Islanders already down a man. The 5-on-3 led to a Torey Krug equalizer. That paved the way toward a 2-2 overtime and a loss in a shootout.

So, how do the Bruins stick to the basics of their “DNA” while also showing the urgency to change the malaise on the ice?

“That’s a good question,” Krug told me. “Maybe if we had the answer, we’d have figured it out already and been doing that. I think it’s just about building our game, trying to get back to the DNA of this team and what’s made us successful for several years and what worked so well last year.

“Well, clearly we got to our game in the third in terms of urgency to win puck battles, races, go to the net, put pucks at the net so people to go to the net,” Cassidy added. “At the other end, I thought we had a little bit more conviction in front of our net. And listen, that’s hockey in a nutshell. You can drop all the systems you want, but when you win your races and your puck battles and you’re willing to go to win the slot battle, we’ve talked about that for years — or net front, however you want to describe it, probably a combination of both — you’re going to be a successful team.

“We didn’t do enough of that in the first and second period, tried to address it at the start of the third and we were good. And listen, we got a break, they fired the puck into the crowd. On the power play, we took advantage of it. I don’t know if we’ve had a five-on-three all year; if we have, it was early on. So good for him for taking advantage of it. So, we caught a break in that regard, but our third period was excellent. First two, we’ve got some work to do.”

Anyone paying close attention over the last three weeks would agree with Cassidy in that assessment.