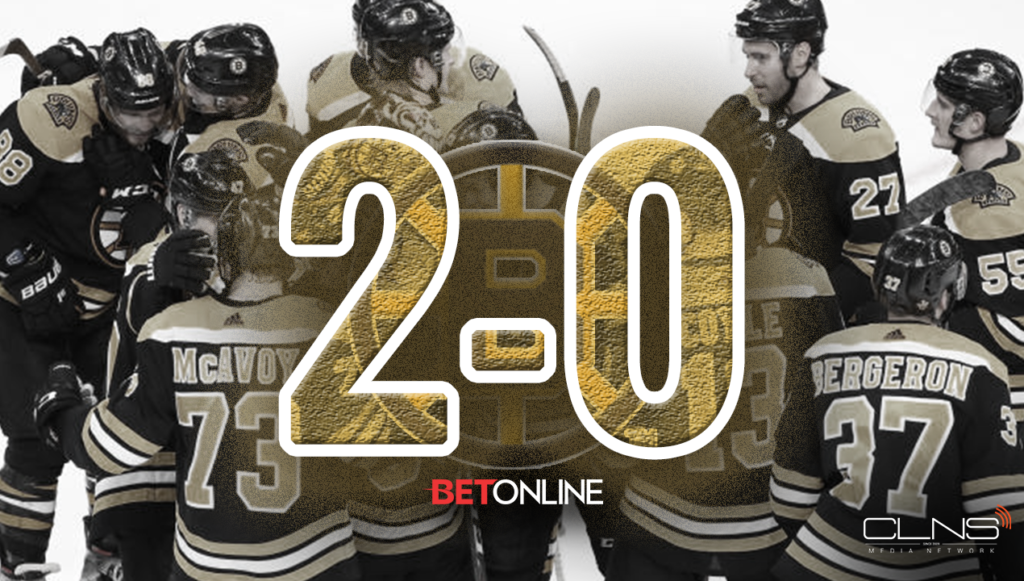 BOSTON — The Hurricanes tried to bully the Bruins Sunday in Game 2 of the Eastern Conference finals.

As a matter of fact, it couldn’t have turned out better for Matt Grzelcyk and Boston in a 6-2 blowout of the Hurricanes in Game 2. The Bruins have a 2-0 series lead and clearly look a level above the franchise formerly known as the Hartford Whalers.

Just 2 minutes and 15 seconds into the game, Micheal Ferland lined up Grzelcyk right in front of Bruins bench. Ferland was the player who took out Marcus Johansson back in March just after the Bruins acquired in him a trade deadline deal. Grzelcyk not only returned on his next shift, he scored 13 minutes later to break the ice in Game 2.

“Well, it was terrific. I mean, I think it lifts our bench when you get drilled pretty good,” Bruins coach Bruce Cassidy said. “You kind of chip it off and back to work and scores a goal, whatever it was, two shifts later, so certainly gives us a lift. I’m not surprised. He’s a tough kid, and in this playoff season – any playoff season – you’re going to take some hits, take a number, get back out there and play the game. Keep discipline and at some point, if you get a chance to be physical against them, you take advantage of it, and that’s the way it works.”

Grzelcyk would add another goal – on the power play – in the second period for good measure.

“I think we were expecting a very physical game out of them,” Grzelcyk said. “It’s something that we kind of had that experience going up against Columbus in the second round so we didn’t get phased by that game and I think we responded really well. We knew how important it was to take advantage of home ice so I’m glad we got the win.”

What Sunday proved is sometimes you don’t need to give a big hit to set a tone. Sometimes it’s the way you respond after taking a hit.

“Yeah, it does. That’s playoffs – there are times where you have to take a hit to make a play,” said captain Zdeno Chara. “He’s not the biggest guy, but he plays well. It doesn’t mean that he’s running people over the boards but he gets into position and I think that he – it shows that he’s getting better and better. He goes to areas where you can get, you know, pucks, and retrieve pucks and get under forward’s sticks and winning those battles.”

The Dougie Hamilton cheap shot to the head of Danton Heinen after Boston’s sixth goal of the game is symbolic of how the Bruins have taken Carolina’s best punch and kept their cool. They know they’re better than the Hurricanes and they’re not stooping to their level.

“Yeah, we got a little frustrated,” said Hurricanes coach Rod Brind’Amour. “After the second one went in I think but yeah we weren’t very good after the first period. The last five minutes of the first and through the rest of the game, we got off our game. Give them credit, they, there is a reason we got off our game, they’re learning us.”

The irony of this is that the Bruins don’t need to be the “Big Bad Bruins” to win this round or the next round.

In Tuukka Rask, they have the best goaltender left in the playoffs. They have their top two lines producing and they have players like Grzelcyk scoring twice in a Game 2 rout of the Cinderella Hurricanes to take a 2-0 lead as the series shifts to North Carolina for Games 3 and 4.

When Connor Clifton scored in the second period, he became the 19th different Bruin to score in the playoffs, matching the 1988 Bruins for a franchise playoff record.

If the Bruins play anything like they have in the first two games, there won’t be a Game 5 next Saturday back in Boston.

The Bruins have been the better team – by far – for the first two games of this series.

These Hurricanes do have one more punch left in them. As everyone in the Bruins room was quick to point out after the game Sunday, this is a Carolina team that dropped the first two games in Washington before rebounding to win four of the next five, including a series-clincher in Washington in Game 7.

“I think we played our game, we played to our culture and obviously we were able to break through and score some goals there and that’s good for everyone’s confidence,” Charlie McAvoy told me. “But it’s over now and we’re headed down there. We have a lot of respect for this team and we know that they’ll play a lot better next game.”

Go back to how the Bruins played in Game 4 against Columbus. That’s essentially been the formula ever since in a 5-game playoff win streak that has them two games away from their third Stanley Cup final appearance of the decade.