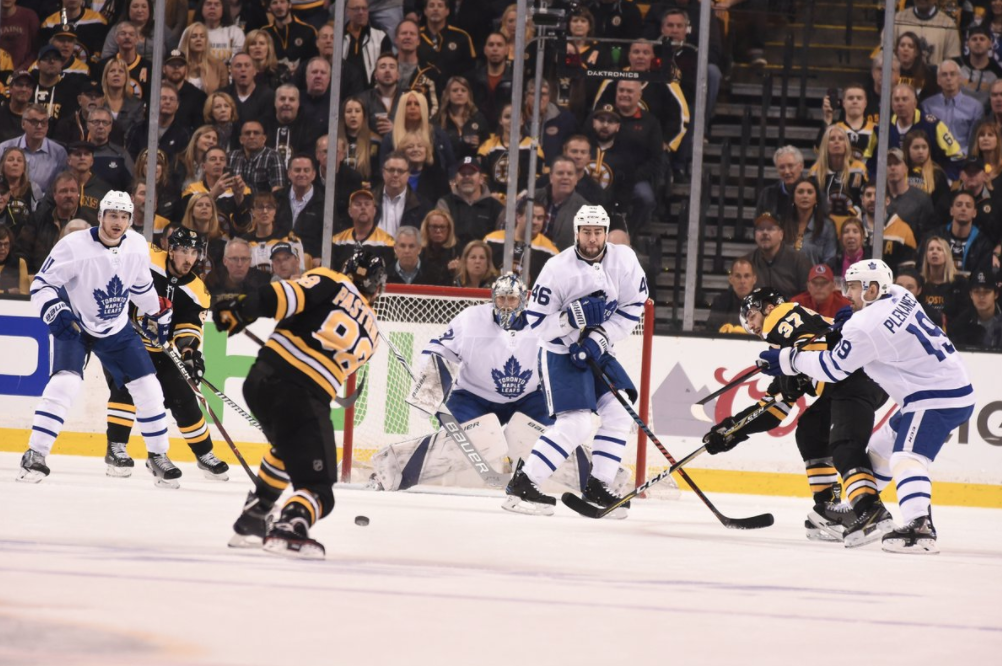 BOSTON — Up and down the Bruins bench Saturday, there was the feeling that something was missing from the start of Game 5.

The Bruins did not have enough energy or commitment to the finish to finish off the Maple Leafs on home ice. As a result, the Bruins allowed the visitors valuable momentum that they turned into a pair of first-period goals and a 2-0 lead that they would not relinquish.

“It clearly wasn’t good enough,” Bruins coach Bruce Cassidy lamented after. “We let them get to the top of the paint for a couple of goals that we’re generally solid on. We had a couple of two-on-twos that turned into two very good chances, happened up there.

“So, clearly, we’ve got to address that. Those aren’t odd-man rushes, that’s not stretch plays, that’s just basic two on twos that we need to communicate better, square up better, defend better. Then obviously, you want a save, as well, mixed in in those, and that didn’t happen either. So, the stuff that we’ve done lately: defend, get saves, that didn’t happen early on. We found our legs eventually and fought our way back in, but the start wasn’t good enough.”

“Yeah, we knew they were going to play that way. Shame on us for not coming out better – having a better first ten minutes there,” McAvoy said of Toronto’s goals by Connor Brown and Andreas Johnsson. “We knew they were going to come like that, their backs are against the wall, and they’re going to continue to come like that so we got to go back and make sure we’re prepared to start the next game.”

“We knew they were going to come out hard,” McAvoy added. “We’ve just got to match that intensity and, you know, a couple good bounces for them, couple good plays and we’re down two-nothing early so we got to assess that, but we’ll be fine, we’re as confident as ever in here. I thought we really held the play starting there when Backs [David Backes] got us on the board in the second all the way through the end of the third I thought that we carried the play and the shots, you know, definitely showed that and we’re fine. We have positives we can pull from this game, we’re going to be fine for Game 6.”

The problem Saturday is that the Bruins could not sustain much. Fifty-one seconds after the Backes goal, the Leafs answered with Tyler Bozak score. Most of all, there will be a Game 6 because Leafs goalie Frederik Anderson stopped 42 of 45 Boston shots on the night.

“We ended up getting 40 plus shots, I think we had 45 shots so we were getting the puck to the net,” McAvoy said. “He made some saves there, especially in the third period, some chances that we had that could have went in. So I felt like we could have tied it up, a lot of guys in here think that, but no sense in hanging our heads on that, we’re still up in the series and we’re in a good position and we just need to, you know, refocus here, take away the good, assess the bad and be ready to go for Game 6.”

“You’ve got to give their goaltender credit,” Cassidy said. “Both games we’ve lost, we’ve put over 40 shots on net. At least 20-something chances, not all on net, that were great chances. So, he was very good tonight; let’s face it. He made a lot of good saves. The goals we got weren’t cheap. Maybe the last one he lost track of, but we were around their net a lot. They got out to the early lead. It’s always easier to play with the lead. I wouldn’t say it wasn’t meant to be. I thought we were very close. I mean, Pasta [David Pastrnak] had a rebound there that he made a hell of a save on, could’ve made it 4-4. Then, obviously from there it’s anybody’s game. So, we pushed back, just give him credit. He made saves.”

The Bruins haven’t gotten a point out of the Bergeron-Marchand-Pastrnak line the last two games they’ve played together. Bergeron returned Saturday and had six shots in 21 minutes of ice time.

“I won’t project past Game 6,” Cassidy said. “He made it through today’s game healthy, finished the game. You always want to see how they are in the morning. I don’t anticipate there will be any issues going in to Game 6. Of course, that could change, but that’s the way it is right now.”

Cassidy, asked about Tampa Bay advancing to the second round earlier in the day with a win over New Jersey, didn’t want to get into hypotheticals.

“No, we don’t talk about Tampa Bay,” Cassidy added. “We talked about, the other night, this morning, we talked about how the two Stanley Cup finalists from last year couldn’t close out. It’s not easy. So, let’s just stay in the moment and stay focused, not think about tomorrow or what we’re going to do if we win or don’t win. Just go out and play.

“Whether that has any effect or not, I doubt it. I think the players, generally, our guys are a very professional group. They go show up and play. We saw that with our pushback. We just dug ourselves a hole we couldn’t quite dig out of, and nothing to do with Tampa Bay or what was ahead. We’ll talk about what’s ahead when we get our fourth win.”