Bruins Poised to ‘Climb The Mountain’ Back to Stanley Cup 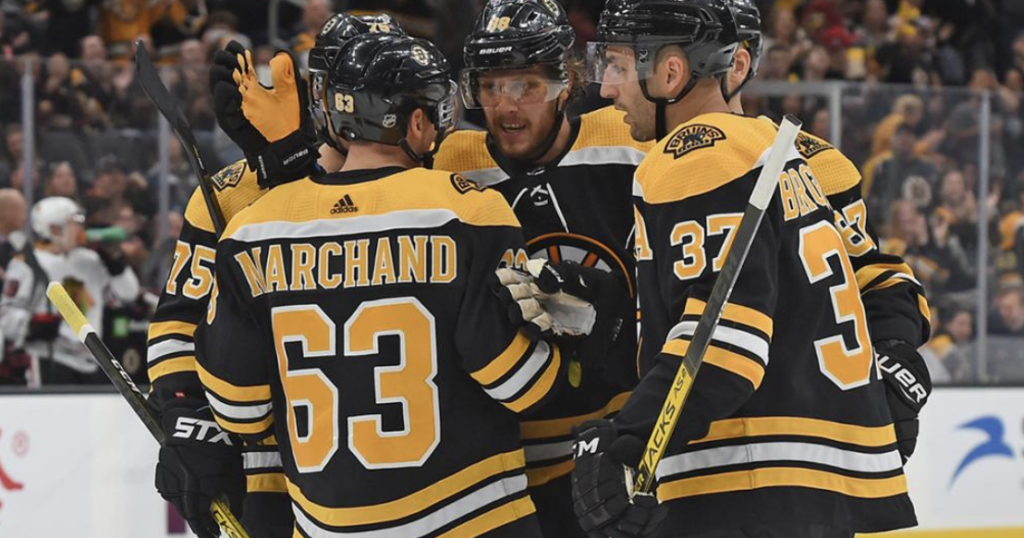 BOSTON – The last time the Bruins had to deal with a brutal and heartbreaking end in the Stanley Cup Final, they captured the Presidents’ Trophy with a league-high 54 wins and 117 points in the 2013-14 season. There was no hangover in 2014 and there shouldn’t be any this time around either.

They are younger, deeper and better this year.

That’s the feel you get watching them this preseason, which ended Saturday with a 8-2 win over a glorified AHL team (Rockford IceHogs) posing as the Chicago Blackhawks. With Chicago’s regulars in Europe, David Pastrnak and Jake DeBrusk each scored hat tricks while Tuukka Rask turned aside 19 of 21 shots. The Bruins finished the preseason without a regulation loss at 4-0-2 and won all three at the revamped TD Garden. Next up, the reworked Dallas Stars this Thursday night in the Lone Star State as the Bruins look to climb back up the mountain.

“Physically, I believe we are,” Cassidy said when asked if the Bruins are ready for the 19-20 season to begin. “Obviously (David Krejci) is a part of that. I’ve said I believe he’ll be ready, but that’ll be up to him, I’ve been told medical staff that he should be ready to go.

“Mentally, I don’t have any doubt that we’ll be ready to play. We’ve had too many veteran guys that are just hockey guys and they like playing. So, we’ll be ready to go in that part. Are we good enough? That you never know until the puck drops at the start of the year.”

Of course, the great expectations of 2014 ended in terrible heartbreak as they lost Game 7 of the second round to the Canadiens on home ice, 3-1. Ironically, the second-place team that year was the Tampa Bay Lightning, the team that is considered their primary competition in the East and last year’s Presidents’ Trophy winners.

They have done all the things this preseason that you look for in a team that has its hopes on returning to the Cup Finals and winning the last game this time.

There are still questions: How will lingering injuries to Joakim Nordstrom, Kevan Miller and John Moore resolve? How will Torey Krug handle his business on the ice entering the final season of his contract? Will Tuukka Rask hold up and continue his run that has him in the conversation of best Bruins goalies ever?

Will they stay healthy? How will Zdeno Chara hold up as a blueliner at the age of 42? On the flip side, how will the kiddie corps of defense of McAvoy, Carlo, Clifton and Gryzelcyk hold up under fire?

“Our young guys have gone in and played in tough environments and played well,” Cassidy told me after Saturday’s final tune up. “That bodes well for what we feel, what could be a situation we need them for down the road. Hopefully we don’t have to go through what we did last year, but if we do, it’s kind of comforting knowing these guys can give you good minutes. They’re not all starters, but they’re guys that can go in the system and do their job.”

Will Don Sweeney need to make a trade for a left wing? That’s a question that can likely wait till February.

But even with the Krug uncertainty, there has been little drama with this Bruins and that suggests another good season.

That 13-14 Bruins team had Jarome Iginla and Patrice Bergeron as 30-goal scorers and Milan Lucic, Brad Marchand and Reilly Smith with at least 20 goals.

With a projected nine players 26 years of age or younger, this team can rely on its youth much more than the team in 2014, which theoretically means they are better positioned to handle the dead legs that no doubt will hit a team that last played a meaningful game on June 12.

“Last year there was a few older guys that didn’t get a look, younger guys that did, why? They were playing better,” Cassidy added. “So, that’s kind of how we’ve tried to do it, reward the guys that play well. I think this year will be no different. I mean, we went into Chicago, was it last Saturday? They had an excellent lineup. We had mostly young guys, and I thought we played well. We got it into overtime, same with Philly. Maybe we were a little deeper there, even the first game with Jersey.”

But perhaps the biggest reason this team is headed for another deep run next spring is the man behind the bench. Since the moment he arrived in the 2016-17 season, the team has been on an even keel, never too high or low. It’s exactly the kind of measured leadership young players need and exactly the criticism leveled at his predecessor Claude Julien, now in Montreal.

This Bruins team is loaded, and Cassidy has made the most of a great support system around him, starting with GM Don Sweeney and a coaching staff that returns in full. Cassidy’s teams have gotten better each successive season. First round loss to Ottawa in 2017. Second-round exit vs Tampa Bay in 2018 and the Game 7 heartbreak against St. Louis last June. Each year, the Bruins have improved, all the while getting younger and deeper.

“Well the depth did us wonders last year, we had a lot of injuries that we overcame in terms of getting our wins and points,” Cassidy said of last year’s team that finished strong but still a distant second to Tampa Bay in the Atlantic Division. “Credit to the organization to finding these young guys that can fit in, everyone kind of did their job — the scouts, the management, the Providence coaching staff, our coaching staff, and the players themselves. We’ve tried to create some good competition, use these guys instead of only relying on older guys from the American Hockey League.”

Cassidy as smartly used internal competition to build the depth on this Bruins roster. And it’s that depth that is the biggest reason this Bruins team is primed for another Cup run.