Bruins Prospect Studnicka Wants To “Stick With the Big Club” 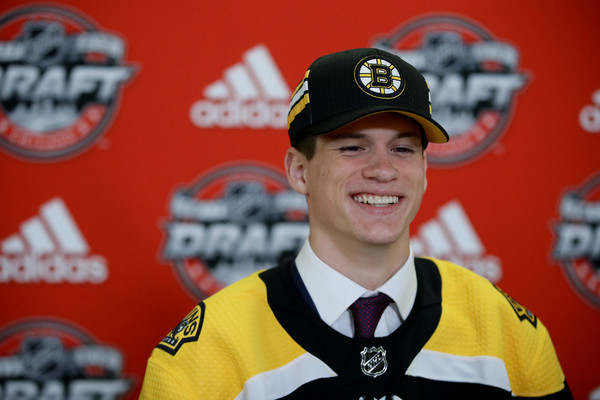 BRIGHTON, Mass — One of the big talks of Boston Bruins development camp thus far has been the NHL readiness of Jack Studnicka. That storyline was generated from his comments after the first day of camp.

“It’s always been my dream to play in the NHL and looking at the roster, there are spots that are up for grabs,” he said. “I’m going to put my head down, go to work and hope for the best.”

“I’ve got a lot of expectations like I mentioned the other day,” said the Ontario native. “I want to go into camp with the mentality that I’ll make the team. My mentality is to stick with the big club.”

1-on-1 with #NHLBruins 2017 second round pick and former @Oshawa_Generals Jack Studnicka pic.twitter.com/phYOTYynxv

Studnicka has been one of the most popular prospects at camp. In the first media session of camp back on Tuesday all the cameras and other hockey writers surrounded his stall asking all kinds of questions. And for good reason.

The 53rd overall pick in the 2017 NHL Draft put up 22 goals and 72 points in 66 games for the Oshawa Generals last season. In five games for the Providence Bruins in 2017-18, he put up a goal and five points. At this point in his career, he’s undoubtedly a point-per-game player.

The hype generated off of his play in Oshawa is huge, and Studnicka attributes a lot of that to his coaches.

“Yeah, I can thank [my Oshawa coaches] for all of my development,” said Studnicka. “I went in there as a strictly offensive guy. They taught me how to play defense and how to play a 200-foot game so I can’t thank the coaches that have been with me there enough and management for really rounding out my game.”

During on-ice sessions at development camp, Studnicka’s skill-based game attracts a lot of eyes. But that’s not all he wants people, especially the coaches, to see.

“I think I play with a high pace,” said Studnicka. “I think that no matter the situation, I’m playing as hard as I can and try to skate as fast as I can, work as hard as I can so I really want them to take note of my compete-level at camp and my game.”

Despite the buzz being centered around whether or not Studnicka is NHL-ready, the coaching staff still sees room for his game to improve before he consistently dawns the black and gold. An area of emphasis is his shooting and it relates back to a common theme.

“I think he’d say it and he needs to keep on improving his shooting,” said Player Development Coordinator Jamie Langenbrunner. “He is a bit of a pass-first guy, his stats would show the same. It’s something I’ve encouraged during the year that you’re not being selfish if you’re shooting at the right time but he can score. He gets himself into spots. I’d say right now he’s in that 15, 10-foot area to score.

“He’s continued to work on it and he’s still a skinny kid so he’s got to put on some strength and his shot will get better.”

Even though Studnicka’s 6-foot-2, it’s hard to ignore that he’s only about 179 lbs. To be successful in the NHL with the way he plays, he will most certainly need more muscle mass which, as Langenbrunner said, will result in a much harder shot.

Not to mention all of the other perks extra strength brings.

For Studnicka, if those big expectations are missed this season, he will head back to the Oshawa Generals for his fourth season with the team.

“Going back to the OHL and developing more there, I’d like to be a more dominant player,” he said. “If that happens, I hope to win a championship there. But my main goal is sticking with the big club.”

Luckily enough for him, time is not of the essence. He’s only 19.