Bruins Round Robin Scoring Drought a Real Cause for Concern 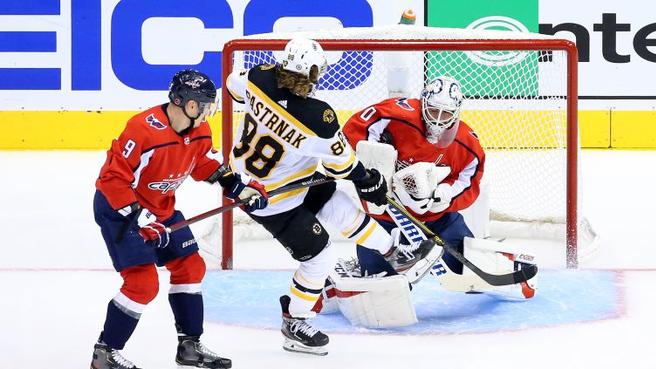 As Nick Ritchie corralled a bouncing puck on one side of the net, Braden Holtby struggled to get back to his feet on the other.

Between the two foes laid three Capitals and one Bruin. It would take seconds — which in hockey time is equivalent to years — for the Washington goalie to hop over the players in the crease and get himself back in the play. In those precious ticks, the only thing between Ritchie and the back of the net was Brenden Dillon’s legs.

Ritchie fired a shot into the one thing he wasn’t supposed to hit in that moment. Holtby was able to reposition himself as the puck bounced back to Ritchie and stop the follow-up attempt with his left arm.

No goal. No goal again.

“That one sequence of plays, [Ritchie] has two looks, Washington defenseman was down on the ice,” Bruce Cassidy said after the loss. “So, next time will he take the extra second and get it up or will it go in the first time? I don’t know. Those are some pretty good looks.”

If one play was to define the Bruins troubles in the 2-1 loss to the Capitals, as well as the two other round robin losses, it would be that one — the complete inability to score.

Ironically enough, the Bruins finished the afternoon with more expected goals than the Capitals. According to Natural Stat Trick, the B’s finished with 2.14 xGF at 5-on-5. The Capitals only had 1.11.

Most 5-on-5 stats from Sunday’s game supported the Bruins scoring more goals than the Capitals. Boston had 54 shot attempts compared to Washington’s 37. The Bruins had a whopping 12 high-danger chances for. The Capitals only had three.

But none of that matters because the Bruins just couldn’t finish off their chances.

One of the biggest issues the Bruins faced through the round robin games was they never even held a lead, which therefore also means they never scored first.

“I think it’s big and obviously it’s not easy playing against a team that scores first, you’re playing against solid squads,” Jake DeBrusk said when asked about his team’s inability to score first. “That’s huge to give Tuukka help there too when we get on the board early. We’re usually pretty good with that. It has been four games where we haven’t had it, but I feel like it’ll be a pleasant surprise when we do.”

The inability to score has started with the trio of Brad Marchand, Patrice Bergeron and David Pastrnak. That line has caught the most heat for an extreme lack of production through the three games.

Sunday saw them play well. They drew the line of Jakub Vrana, Nicklas Backstrom and T.J. Oshie and heavily outplayed them. No matter who was against them on the ice, their numbers were the best they’ve been since arriving in Toronto.

But as for the most important stat in a hockey game, the line had zero goals. The same could be said for the Charlie Coyle line, as well as the Sean Kuraly line.

Jake DeBrusk scored the lone Boston goal in the loss when he received a pass from Ondrej Kase behind him and shot it through Holtby’s legs.

What a goal by DeBrusk!! #NHLBruins pic.twitter.com/UvI00NyLEW

He still wasn’t too pleased with how he played.

“I didn’t feel good about my game,” DeBrusk said. “It’s one of those things that’s kind of hard to judge. For me it’s battles and winning board battles as well.”

The eye test supported what the stats said — the Bruins had ample chances, especially in the second and third periods, but they just couldn’t finish.

Roughly five minutes into the second period, David Krejci made a great pass from behind the Washington net to Kase who had Holtby beat. But at the last second, Oshie came down hard on his stick and the deadline acquisition lost the puck.

Charlie McAvoy, who was a huge bright spot for Boston on Sunday, had a point blank chance from the slot. Holtby robbed him with the glove.

It’s hard to blame McAvoy for not finishing on this play. For one, it was a really nice save from Holtby. And two, Michal Kempny’s stick was down. Had McAvoy gone any further with the puck, or tried to make a move and lost it, we’d be nailing him for not shooting the puck.

Early in the third period, Coyle had a chance from right in the slot and shot it wide of Holtby. It’s hard to tell whether or not it hit Nick Jensen’s stick but nevertheless, you can’t miss the net from right there.

The toughest one to swallow came with less than seven minutes to play in the game and the Bruins only down 2-1.

Marchand cut towards the Capitals net all alone and with Holtby down and a good amount of space between the goalie’s shoulder and the crossbar, No. 63 roofed it over the net. It may have hit the post (it’s hard to tell with these camera angles) but it still didn’t go in. That could’ve tied the game.

Marchand will want this one back #NHLBruins pic.twitter.com/6MHiN2mxSw

The good news for the Bruins is they improved over the course of the three losses. The bad news is their scoring issues have yet to elude them.

Four goals in three games isn’t going to get it done. It didn’t get it done in the round robin and it certainly won’t do the job against the Hurricanes.