Bruins Should Just Say No to Jumbo Joe (Thornton) 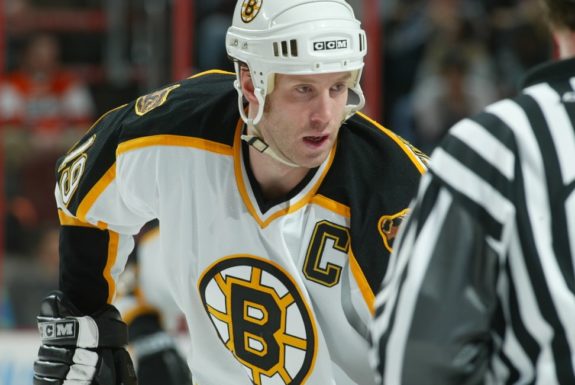 It makes for the perfect story.

Hey, here’s Joe Thornton — the former Bruins wonder boy — coming back to where it all began to chase his elusive Stanley Cup championship.

Thornton didn’t leave on good terms back in 2005. But with a new regime here, their only collective focus would be on winning the Cup together. Imagine if he did come back to Boston and win it? He’d surely be who Zdeno Chara would hand the Cup to first. It’d be the reverse Ray Bourque and Boston would eat it up.

It also wouldn’t take much to secure Thornton’s services. He only carries a cap-hit of $2 million. He’s a free agent at season’s end. He’s 40 years old. His prime is far behind him.

But the reunion wouldn’t make much hockey sense.

One common take is that if Thornton joined the Bruins, he’d center the third line. That would mean Charlie Coyle would be forced up onto David Krejci’s right side on the second line.

Coyle’s much more effective when deployed on the third line. He’s always said he needs stability to be at his best. Pushing him up next to Krejci and Jake DeBrusk — a move that’s never been one to the benefit of Coyle — isn’t where he fits best.

A big reason as to why Coyle was so successful last spring was because he got the favorable matchups while centering that third line. Cassidy would often match his fourth line against the opposition’s top trio. The Patrice Bergeron and David Krejci lines would take turns going against the next two best lines and Coyle, Marcus Johansson and Danton Heinen would get the other team’s worst.

That helped Coyle rank fifth on the Bruins in points throughout last year’s playoffs.

Had he been up on the second line or matched up with a stronger group of forwards, his impact would’ve been less. Through that second round series against the Blue Jackets, Coyle and Johansson were key in large part due to favorable line matchups.

Another common thought is if the Bruins acquired Thornton and wanted to keep Coyle on the third line, they’d move Sean Kuraly up to play with Coyle and insert the 40-year-old veteran as their fourth line center.

A large part of why that checking fourth line is so successful is because of their ability to shut down other team’s top trios. They’re known for being hard and fast on the forecheck, laying out to block shots and being physical enough to knock stars off their games. Cassidy especially loves sending out Kuraly, Chris Wagner and Joakim Nordstrom against the Tampa Bay Lightning’s elite weapons.

Removing Kuraly — who’s the heartbeat of that line — and replacing him with Thornton lowers that line’s ability to execute their duties. His offensive upside might be higher than that of Kuraly’s, but his quickness is long gone and his ability to be ferocious on the forecheck isn’t anywhere close to No. 52.

The only place in which Thornton might benefit the Bruins is being in front of the net on the first power play unit. Jake DeBrusk currently occupies that spot and does a fine job of it. At this very moment, the B’s have the league’s second-best power play conversion percentage at 25.9 percent. Their 51 goals on the man-advantage rank atop the league.

So, what’s really the point?

Thornton might make them a tiny bit better in an area they have no reason to improve in. But that’s not worth messing up chemistry in other areas just to boost up an already good power play and make a nice story.

What the Bruins actually need come Feb. 24 is a top-six, scoring winger. Karson Kuhlman’s done a fine job of temporarily holding the right wing slot next to Krejci. But if the Bruins are looking to make another deep playoff run, they’ll need an established wing — Kyle Palmieri, Mike Hoffman or Chris Kreider. Another option that’s been thrown around is Josh Anderson.

Scorers like Hoffman or Palmieri would fit well on Krejci’s right side, Palmieri especially. Both have hit 30 goals before. For Hoffman, that was last season when he potted 36. After scoring 30 in 2015-16, Palmieri’s scored at least 20 goals per season since. He’s on pace for over 30 goals this year.

Palmieri would require the least in return, although he does have one more year of control after this one. He also carries a cap hit of $4.65 million. Hoffman’s better, has the higher offensive upside and plays for the Panthers. That would come at a price.

Tyler Toffoli, a comparable winger, went to the Vancouver Canucks for a second-round pick, a top prospect and an NHL journeyman. Palmieri would yield a similar return. Hoffman’s would most likely be a bit higher.

With the Lightning having snagged Blake Coleman, the spotlight is now on the Bruins to make a move to improve their offense. It’s a pretty widely held opinion that they must do something.