Bruins Should Swing Big In A Trade For Max Pacioretty 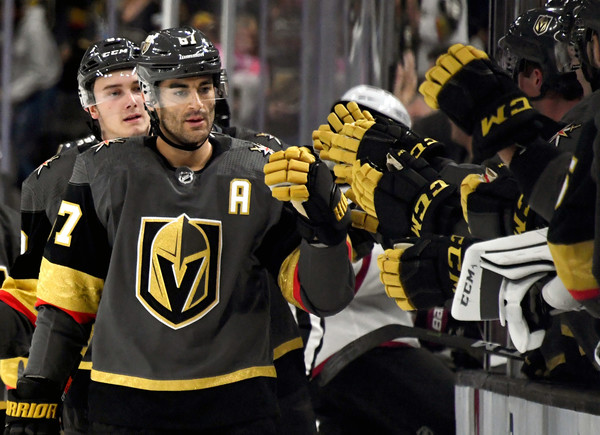 If there’s any holiday shopping the Bruins are looking to do, general manager Don Sweeney’s first call should be to Vegas since they’re practically hosting a clearance event to free up cap space.

Those are typically big places to be this time of year.

According to TSN’s Frank Seravalli, the Vegas Golden Knights have “doubled down in recent days and weeks in an attempt to move” forward Max Pacioretty. Pacioretty still has three years left on his current deal, which carries an average annual value of $7 million per. It’s also been reported by The Athletic that the Golden Knights have also spoken to teams about forward Jonathan Marchessault and Marc-Andre Fleury.

For starters, the Bruins don’t need Fleury. That’s a given. The Bruins also aren’t in a position where they desperately need a proven, top-six winger. While David Krejci is still in need of a right wing, Boston has plenty of candidates to audition — Ondrej Kase, Craig Smith, Jack Studnicka, Anders Bjork and Nick Ritchie. Bruce Cassidy could even slide David Pastrnak down to play with Krejci and move one of the previously mentioned wingers up. Cassidy and co. have options.

But a player of Pacioretty’s caliber doesn’t come around often and the Bruins are in a unique position. It’s a perfect fit.

Why Pacioretty would be such a fit isn’t just because his numbers are good and consistent. It’s because of his age, the term left on his contract and how both fit with where the Bruins are currently at.

It’s no secret Boston’s Stanley Cup window is closing. Zdeno Chara still hasn’t re-signed, and the 43-year-old is, well, 43. The futures of Krejci and Tuukka Rask after this upcoming season are murky. Patrice Bergeron is a UFA after the 2021-22 season. He’ll be 37 when the 2022-23 campaign begins.

If the Bruins could pull the trigger on a trade for Pacioretty, it would give them the strongest top-six they’ve had in the Chara, Bergeron era. In a perfect world, let’s say the Bruins can hold onto Jake DeBrusk while dealing for Pacioretty. Their top two lines would be Marchand-Bergeron-David Pastrnak and DeBrusk-Krejci-Pacioretty.

It wouldn’t be easy hanging onto DeBrusk, given he makes $3.675 million and the Bruins only have $2.982 million in cap space, according to CapFriendly. The B’s would have to free up money somehow and a package of John Moore, Kase and Ritchie probably won’t get it done. Sorry, Bruins fans.

DeBrusk is also 24, a winger with enormous potential and fits with where Vegas is going. In normal times, it’d be hard to imagine the Bruins not having to give up DeBrusk for a player of Pacioretty’s caliber.

But these aren’t normal times.

This trade market is very different. Back in October, the Golden Knights dealt top-pairing defenseman Nate Schmidt to the Canucks for a third-round pick. Because of the uncertainty around the league, the flat cap and their bad situation with regard to it, Vegas is desperate to deal.

Pacioretty will require assets in return, but nowhere near the caliber Vegas would normally ask for. The Bruins have a plethora of young, fringe top-six wingers with potential that could be palatable for a team like the Golden Knights. Boston also has two NHL-caliber defensemen — Moore and Connor Clifton — who may not be full-time with the Bruins, but could be across the country in Vegas.

That, coupled with the Bruins want to maximize the Cup window, should be enough to increase a desire to get a deal done on Boston’s end.

So, will the Bruins call Vegas and make this trade?

There have been zero reports linking them to Pacioretty. With the uncertainty of next season and how the Bruins generally operate, it’s hard to imagine they deal for the star left wing. However, the Bruins showed they are willing to make a blockbuster deal when they were a finalist for Coyotes d-man Oliver Ekman-Larsson back in early October.

Whatever the past may indicate, Pacioretty would be a phenomenal fit on the Bruins and it’s the kind of holiday shopping that Sweeney should be looking into.