Bruins’ Stars Rise And Shine, Showing They Are Cup Worthy 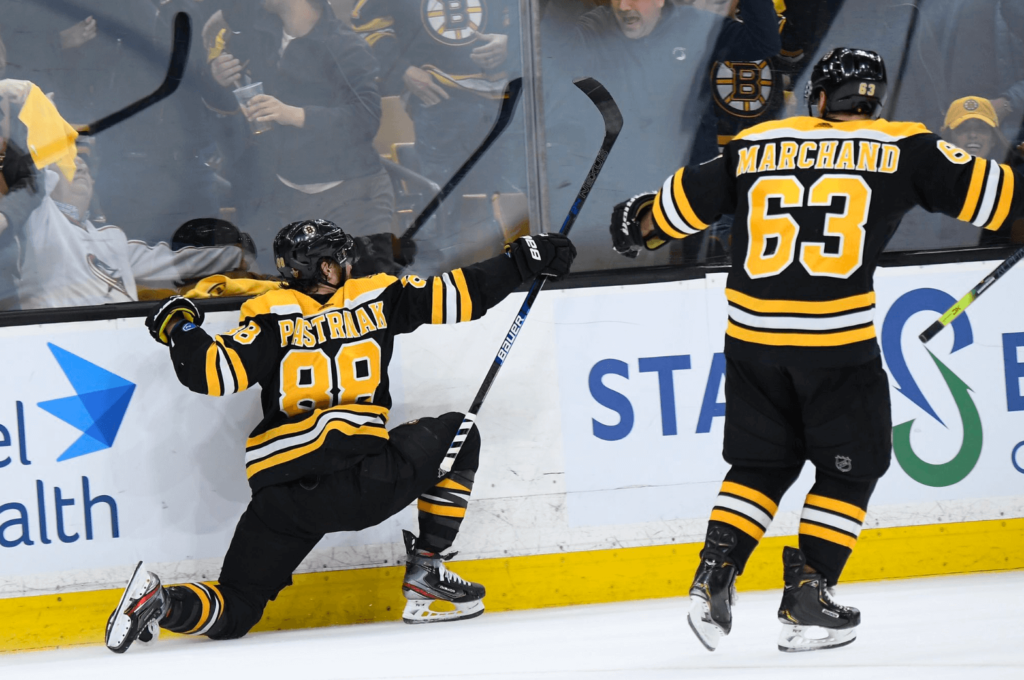 The trio is the reason these Bruins are – right now – the odds-on favorites to win their seventh Stanley Cup.

In a 4-3 Bruins win in Game 5 over Columbus Saturday night, a tight-checking game-turned-barnburner, those three players made plays that championship teams need. In other words, the Bruins had their biggest players show up in the biggest moments of the biggest game of the series.

Starting with Rask in the second period twice on Cam Atkinson and again on Atkinson in the closing seconds while trying to protect a one-goal lead. Rask stopped all 15 shots in an incredibly busy second stanza.

“Listen, you don’t advance without excellent goaltending, timely saves,” coach Bruce Cassidy said. “We got it right to the last 15 seconds out of him. So, second period, yes, he kept us above water. I think it happened the other night in Columbus as well. He was good in that period when we weren’t as good.

“In the third period, we started checking well again and were able to close the deal the way we’ve typically done it this year. So, that is an area of concern with our club – second periods. How to manage the puck better, put it in good spots so we can get fresh legs out there. Not lose two or three on the forecheck – two on the forecheck, one to a line change, all the sudden the odd-man rushes start happening. That’s something we’ll address again, but easier said than done to fix.”

For as much as Sean Kuraly scoring a key goal in Game 7 against Toronto was a great storyline, if the Bruins are going to raise the Cup in June, they absolutely, positively need their best players to produce.

That’s been the biggest criticism of this bunch that, following Saturday’s win, is now one win away from a date with Carolina in the Eastern finals.

Marchand showed an ability to persevere on his fifth goal of the playoffs. He fired a shot on Sergei Bobrovsky 4 minutes, 45 seconds into the third period as the Bruins were clinging to a 1-0 lead. Bobrovsky made the save with his glove but couldn’t hold the puck, which found its way back to Marchand. The left wing wasted no time, firing the puck back on goal. Bob couldn’t make the second save and it was 2-0.

“Momentum is definitely a thing,” Marchand said. “You saw the way that they kind of took it and used it in the third to come back. But, the game is over, done with. We’ll feel good in the next game. Completely new challenge. So, yeah, we’ll see.

“(I wasn’t) frustrated, but I’ve had a few looks from that spot where he [Bobrovsky] continues to come across with that glove up in the air and catching them. You know, he made an incredible save on that first one. So, it was more of just the fact that I was shaking my head at how nice of a save that was.”

And then there was David Pastrnak. The Bruins super-talented winger found his groove with a pair of goals, including the game-winner with 88 seconds left in regulation after the Bruins blew a 3-1 lead and faced the specter of another overtime Saturday night game in the series.

“I think it was a great game, we were building our game through those periods,” Pastrnak said. “Marchy came big for us, had an unbelievable game. We picked each other up, it’s great to be a part of this line. A lot of positive things, every single shift.

“We went through a lot this season, bunch of injuries and just believing in one another. Every time someone was out, another guy stepped up and I would say that counts to belief. We are not done; but we have to enjoy tonight but regroup and look to Game 6.”

That’s not to say the Bruins won’t need a supporting cast. With 15 seconds left in the game, Artemi Panarin unloaded a rocket from the left circle, Charlie McAvoy slid across and stuck out his right skate and the puck struck him.

“I mean, that’s the thing, we have – there’s no doubt in any of our minds they’re going to come through,” McAvoy told me. “They always do. They love the big stage, and we needed them big time tonight, and they showed up; they delivered. From the bottom all the way to the top, I think we had everyone contribute tonight in one way or another, and that’s what it’s going to take.

“You want to leave your imprint on the game in any way possible, and like I said, I got lucky. I threw my body out there, and I was fortunate enough that it hit me. Whatever it takes, right? I think you put any person on our bench, I have complete faith that whoever it was out there is going to do that, is going to jump in the lane. That’s what it takes, and Butchy [Bruce Cassidy] has been preaching that, and we all know that. So, tonight it just happened to be me, but it’s been other guys. There were a lot of big blocks; I know Nordy [Joakim Nordstrom] had a couple, Wags [Chris Wagner] had a couple. We need to do that. That’s winning hockey.”