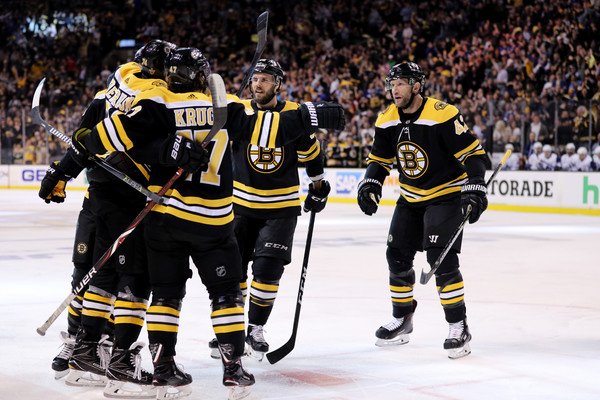 It’s that time of year again.

For the eighth straight year, Channel Media & Market Research released their New England Sports Survey. It’s always a hot topic given the time of year it’s sent out and the legitimacy of the actual survey.

The study is conducted between Aug. 16, 2019 and Aug. 25, 2019 according to the firm. The results are from 16,115 qualified surveys. To be qualified, the participant had to have been following at least one of the teams half of the time and they had to complete the survey in its entirety.

What will Charlie McAvoy and Brandon Carlo get on their new deals? @ConorRyan_93 joins @emarinofsky to discuss that and his exclusive interview with Don Sweeney.

Now that the logistics are out of the way, we can dive right into the actual results.

The Boston Bruins did well given their low numbers the past bunch of years. The New England Patriots consistently rank atop the list of everything, so it then becomes a battle for second, third, fourth, and fifth place (they include the New England Revolution).

A common theme among the results was that the Bruins going to the Stanley Cup Final left both a good and bad mark.

This was the biggest head-scratcher on the entire survey.

It’s no surprise that David Backes came in first with this question at 21 percent. But right after Backes was David Krejci at 15 percent.

Krejci has consistently found himself taking heat from Bruins fans and media alike throughout his time in Boston. Some criticism has been warranted in the past — 44 points in 2017-18 didn’t look great and 55 the year before wasn’t much better.

But 2018-19 saw Krejci tie his career-high in points at 73. He centered a second line with Jake DeBrusk on his left side and a revolving door on his right. His numbers last year didn’t just hit expectations — they exceeded them. For Krejci to be ranked right above Ryan Donato for missing expectations is flat out wrong.

Krejci centered Brad Marchand and David Pastrnak when Patrice Bergeron was sidelined from late November through most of December. During that time, the first line produced nine goals in 11 games and had an expected Goals-For percentage of 59.72 percent. Those are outstanding numbers for Krejci to go right up between Pastrnak and Marchand and begin producing.

A lot of people argue that Krejci missed expectations in the playoffs. If we’re going to go off that standard, then Patrice Bergeron and Marchand should’ve been on the same list for their play in the Cup Final and they weren’t.

Bottom line is that Krejci shouldn’t have been anywhere near this list.

How many times did Peter Chiarelli vote in this survey?

This result also came out of left field. The question centered around the Bruins player who won a championship but for “whatever reason” was their least favorite.

Since the Bruins have only won a championship once in this generation, it’s no surprise that only players from 2011 were on this list. But Tyler Seguin coming in first at 15 percent is very surprising for a number of reasons.

For one, Seguin is remembered around Boston more for how management botched trading him than anything else. Obviously the second overall pick had his off-ice issues, but the impulsiveness of Chiarelli and his crew to deal Seguin off will always be a head-scratcher.

Throwing it back to 2011 when Tyler Seguin went OFF against the Lightning in the Eastern Conference Final pic.twitter.com/Zxd2hTt4m4

People often forget Seguin’s play in the 2011 Eastern Conference Final against the Tampa Bay Lightning and how he led the B’s in goals and points during the 2011-12 season.

He certainly wasn’t the most likeable Bruin ever; but first place on this list seems wrong.

Another surprise with this list is Nathan Horton coming in right after Seguin at 14 percent. Horton left after the 2012-13 season, which didn’t help his view in the eyes of the fans. But Horton was vital to the 2011 team winning the Cup.

If there’s any answer to this question, it’s without a doubt Tomas Kaberle.

Bruce Cassidy didn’t rank up to his performance

Bruce Cassidy’s tenure as coach of the Bruins has been a very good one.

And apparently it’s underrated now, too.

For the question regarding which coach participants most admired, Cassidy came in tied with Brad Stevens for third place at nine percent.

That doesn’t seem all that right.

Cassidy’s ability to guide the Bruins through a rash of injuries throughout the 2018-19 season was Jack Adams-worthy in and of itself. He had his finger directly on the pulse of when to plug guys in certain places throughout the lineup. He was still shaking up the lines all the way through the Cup Final.

Remember that time Karson Kuhlman was put on Krejci’s right side in Game 6 of the Cup Final and he ripped one past Jordan Binnington late in the third period?

Cassidy should come in second on this list. His coaching job easily trumps the most recent performances of Alex Cora and Brad Stevens.

Cassidy would at least rank number one in comments to the media, right?

Jeremy Jacobs, Cam Neely, and Don Sweeney had every reason to love these results.

When it came to participants saying which ownership group they thought did the best job over the past year, Jeremy Jacobs with the Bruins ranked second at 14 percent. That might not seem like a high percentage until you look and see that he was at one percent in 2017.

Jacobs is far from a fan-favorite in Boston. But with the team’s recent Cup appearance, his numbers got a big boost.

The same can be said for the management performance of Neely and Sweeney with the Bruins. When it came to rating the job of each management team, they came in second place at 46 percent. That’s a jump from 36 percent last year and a huge jump from 15 percent in 2017.

The Bruins’ ownership and management usually gets some serious heat in Boston. But with the Cup birth and a perfect blend of veterans and young guys, B’s fans loved the job of Jacobs, Neely, and Sweeney.

This is expected at first glance. At second glance, there’s a much different answer.

Participants were only allowed to pick one team that had the best chance at winning the next championship. The Bruins came in second place at 22 percent.

It’s easy to see why the B’s came in this high — they’re literally two months removed from being in the Cup Final.

But if you just look at the Bruins, their path to the Cup was as easy as it could be this past spring. There is almost no chance they get the Columbus Blue Jackets and the Carolina Hurricanes again in the middle two rounds. The Tampa Bay Lightning are coming off being swept in the first round, the Toronto Maple Leafs improved, and the Metropolitan Division got a lot better.

The Bruins still have a very good team and are a Cup favorite. It’s just really hard to get back to the Cup as is and the road back in the Eastern Conference will never get any easier.

Even though they’re currently struggling, the team with the second-best chances at winning the next championship is the Red Sox — a stacked lineup and relatively easy competition.

The Bruins Game 7 loss in the Stanley Cup Final to the Blues this past June was one of the most disappointing Boston losses of this generation.

And it showed in this survey.

When participants were asked what the worst thing that happened in New England sports was over the past year, an overwhelming number of people had answers related to Game 7.

“Boston Bruins not winning the Stanley Cup”: 23 percent. “Boston Bruins in Game 7 of the Finals”: 17 percent. That comes out to 40 percent of the disappointment in New England sports over the past year and that’s exactly how it should be.

It’s a highly-shared opinion that this past Stanley Cup Final may have been the veteran core’s last crack at winning the whole thing. There’s a good possibility that Zdeno Chara could walk into the sunset going one-for-three on championships — a mark that lags behind other legends from around the city.