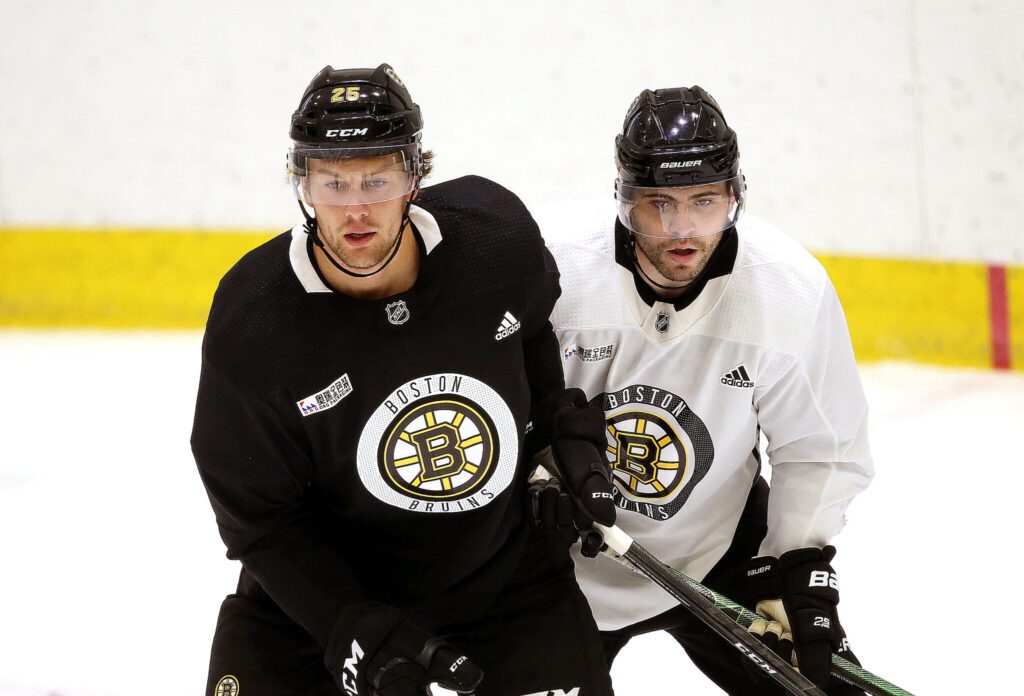 BRIGHTON, MA — To be back at Warrior Ice Arena covering the Bruins doing anything was a feeling I’d been missing since early 2020. In a world as abnormal as it is right now, showing up to training camp felt like a tiny tiny bit of normalcy.

The Bruins held two sessions Monday — Group A practiced first and then Group B took to the ice right after. Let’s get right to the line combinations in each group.

Reaction to Chara signing with the Capitals

Monday was the first time any Bruins player spoke since the 14-year captain packed his bags and headed for the nation’s capital.

McAvoy had the most heartfelt words for his former d-partner.

“He’s meant the world to me,” McAvoy said.

Many question marks surround the 6-foot-9 hole on McAvoy’s left. No. 73 took most of his practice reps with Lauzon. The biggest storyline to watch will be whether or not Lauzon has the consistency to stay in the top four.

Marchand, who’s played his entire career with Chara, praised the shutdown defenseman for his leadership.

To the surprise of many, Marchand underwent sports hernia surgery over the offseason.

Even more of a surprise: the injury was impacting Marchand a ton the past few seasons.

“I was only able to play at 80 percent. I couldn’t take a full stride,” Marchand said via Zoom Monday. “A lot of times I was taking days off. In the playoffs, I was barely practicing because I needed every day off to recover because I was in a lot of pain. It bugged me every single day. It was a really easy decision to do it. I was going to do it regardless, no matter what happened this season. Having 4-5 months off, whatever it was, it worked out perfectly for me. But I was having that surgery regardless. I needed it big time.

“Now, after having gone through it, I can’t believe I wanted two years to do it.”

Head coach Bruce Cassidy’s reaction to the news that Marchand was playing at 80 percent was quite predictable.

“Then he’s going to be a 20 percent better player for us,” Cassidy said after Day 1. “I thought he was pretty good at 80 percent.”

Marchand skated in a red, non-contact jersey for the first half of Group A’s session on the ice. He skated next to Bergeron and Studnicka. For the time he was out there, he looked great.

He plans on being in the starting lineup opening night.

Kevan Miller back with the Bruins

The story of Group A was that after a very long hiatus and many setbacks, Kevan Miller was back.

“Almost got goosebumps watching him,” Marchand said of his teammate and business partner.

Miller looked solid on Day 1. The only drill he didn’t look so sharp in was the reverse breakouts. Other than that, he looked good. He was skating past teammates in 1-on-1s and he was strong on the puck. He’ll certainly need all of training camp to be caught up, but expect Cassidy to lean on Miller early in the season.

Bergeron even had Miller lead the final stretch of Group A.