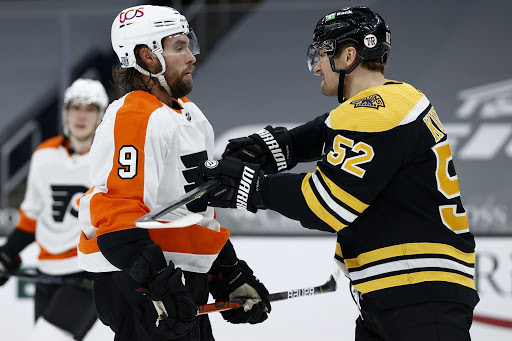 The Bruins and the Flyers will face off on the 18th fairway of the Edgewood Tahoe Resort. This beautiful rink features aesthetics that we have never seen before in an NHL Outdoor event.

The NHL’s Nick Cotsonika has displayed this stunning rink all over Twitter.

I scammed my way to the top of the main TV tower. (Hey, I’m working on a story!) This is will be the perspective of the main game camera. #NHLOutdoors pic.twitter.com/AlJiRK7072

“The chalet” is all dressed up. This houses the front offices, stats crew, instant replay, etc. The middle part that looks like a stone chimney is the main camera tower, an independent structure to reduce shaking. Note the old-school scoreboard. #NHLOutdoors pic.twitter.com/A4HgQvEOXj

Day 1 of the Lake Tahoe action was delayed due to the weather not cooperating with the NHL Events planning. The cloud cover was not enough and the sun began to melt the ice. The Avalanche and Golden Knights got through the first period of play before the ice was deemed unplayable. The game resumed nine hours later.

The Bruins and Flyers are set to play Sunday at 7:30 p.m. ET. Both teams went to Lake Tahoe without key players.

Bruce Cassidy spoke with the media yesterday and listed the players who did not travel to Lake Tahoe with the Bruins. David Krejci, Kevan Miller, Jakub Zboril, Matt Grzelcyk, and Ondrej Kase did not go on the trip to Lake Tahoe.

On the Bruins end, they did not hesitate to bring some younger guys in to fill spots.

Bruins practice lines on Saturday were as follows:

Bruce Cassidy shared his thoughts on both the Bruins and the Flyers missing key players during his media availability Saturday.

Cassidy insists that “both teams will rely on depth” and that it will be a “good hockey game.”