Home plate umpire Laz Diaz missed a clear strike 3 call in the 9th which led to a 7 run Astros rally. The ALCS is now tied 2-2 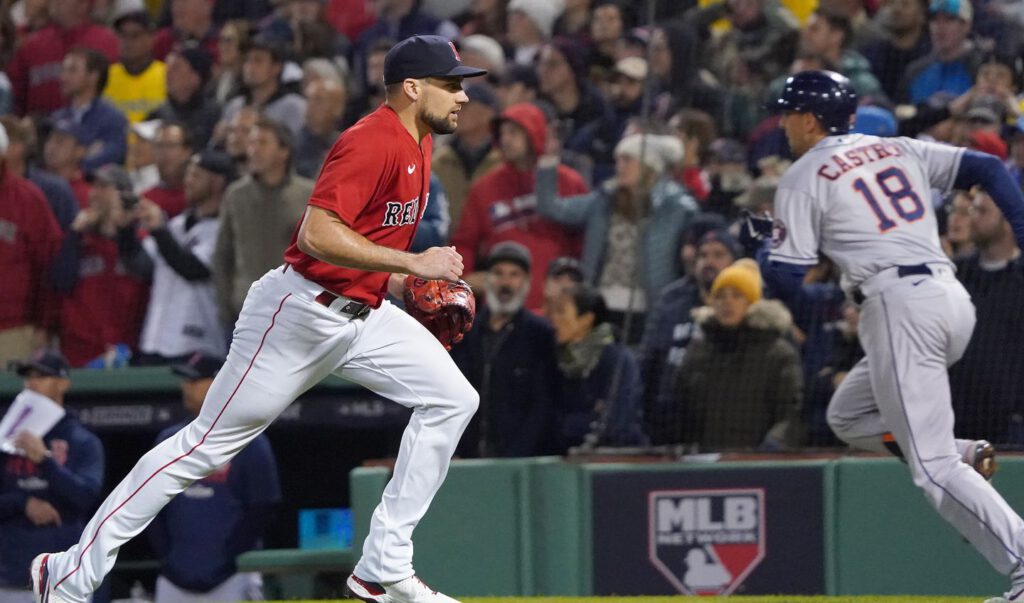 FENWAY PARK — The Red Sox had the Astros on the ropes and were 6 outs away from taking a (say it with me) ‘commanding’ 3-1 lead in the ALCS. But a missed strike 3 call and some bad bullpen work by the Sox turned a 2-1 lead into a 9-2 blowout loss. And an ALCS that looked to be in the Red Sox control is now tied at two games apiece.

Everything came apart in the top of the 9th where the Astros blew the game wide open scoring 7 times to break a 2-2 tie. All seven runs came with two outs after catcher Jason Castro appeared to have struck out not once, but twice to end the inning. Home plate umpire Laz Diaz saw it differently even though replay confirmed both pitches caught the plate. Castro then lined an RBI single to right off Nathan Eovaldi to give the Astros a 3-2 lead, which then ballooned to 9-2 before all was said and done.

If this is called a strike, the inning is over and the game stays tied.

But Laz Diaz called it a ball. pic.twitter.com/yIrBezqk89

“I thought it was a strike, but again, I’m in the moment. I’m trying to make my pitches,” Eovaldi said after the game. “I’m attacking the zone.

“I felt like I was in control of the at-bat. Felt like I made a good pitch on the outside corner. Didn’t go my way, but I got to answer back and make another good pitch.”

“We were one pitch away from ending that inning, it didn’t happen. And they scored seven,” Red Sox Manager Alex Cora said after the game.

Cora passed on an opportunity to bash Diaz over over the missed call.

“I gotta take a look,” Cora said. “Yeah, a lot of people thought it was a strike.”

The Astros kicked off the scoring in the first as Alex Bregman popped a classic Fenway homer to left off Red Sox starter Nick Pivetta, a lazy fly ball that found the monster seats for a 1-0 Houston lead.

The lead was short lived as Sox shortstop Xander Bogaerts smoked a 2-run homer to left off Angels starter Zach Grienke to give Boston a 2-1 lead.

Greinke only got one out in the second before being pulled. Final line: 1 ⅓ innings, 1 hit, 2 runs, 3 walks, 37 pitches, 18 for strikes. He became the 4th Houston starter to not make it out of the 3rd and the 3rd straight to exit the game in the second inning.

After scoring 21 runs in two games the Boston bats however went ice cold the rest of the game. Credit Houston’s bullpen as well which held the Sox to only 4 hits and no runs over the final 8 innings. The Sox has their chances, leaving 11 runners on base while going 0-for-9 with runners in scoring position.

The game remained 2-1 until the top of the 8th when Jose Altuve smacked a solo home run off reliever Garrett Whitlock to tie the game at 2.

The Red Sox turned to presumptive Game 6 starter Nathan Eovaldi in the 9th and that’s where things unraveled. Astros shortstop Carlos Correa led off with a double over the head of right fielder Hunter Renfroe. After striking out Kyle Tucker the Sox opted to intentionally walk Yuli Gurriel. Eovaldi then struck out Aledmys Díaz before the Castro missed strike three situation and eventual game winning hit.

Martine Perez relieved Eovaldi with the based loaded and allowed all 3 inherited runners to score as well as 3 more of his own.

On the matter of home plate umpire Laz Diaz, he was consistently inconsistent all night (and all season for that matter ranking as one of the worst umpires in MLB all year) and his erratic strike zone affected both teams. ESPN’s Jeff Passan tweeted that Diaz had gotten 21 ball-strike calls wrong heading into the bottom of the 9th — the most of any umpire during the 2021 postseason. Diaz added to that total with two more missed calls before the game was over.

Home-plate umpire Laz Diaz has missed 21 ball-strike calls tonight, according to @ESPNStatsInfo. That is the most of any umpire this postseason. The green dot in the upper RH corner is the Eovaldi curveball that would've ended top of the ninth with the score 2-2.