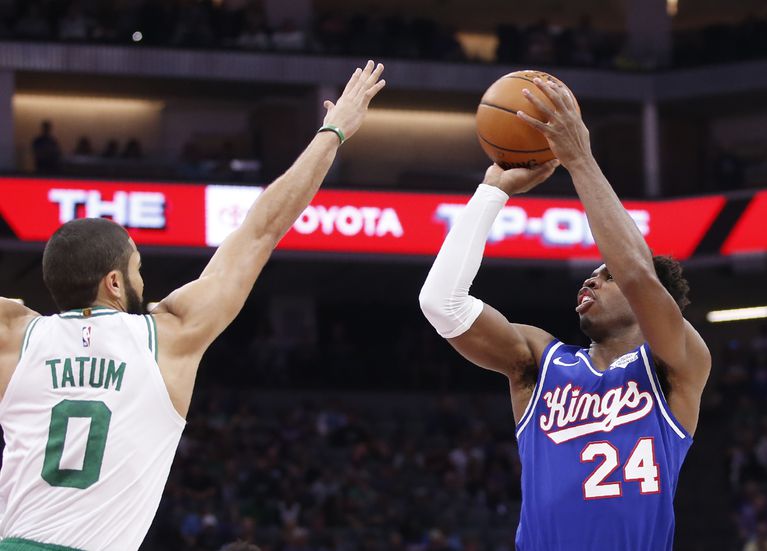 When Marcus Smart saw his potential game-winning floater bounce four times towards the front of the rim just before it slid off, Buddy Hield punched the ball with enthusiasm as the game clock expired, ran down the floor, and with the ball still bouncing alongside his foot, punted it into the stands for good measure.

His elation increased as he celebrated with his teammates, Hield’s 35-point masterpiece, including 19 in the second half, propelled the Kings to top the Celtics,100-99. It snapped Boston’s 10-game winning streak in heartbreaking fashion and Hield worked hard for every second of that triumphant moment.

The end of the Celtics-Kings game was brutal for Boston…

Buddy kicked it right into the stands ? pic.twitter.com/UdXFoJomxt

Leading the De’Aaron Fox-less Kings, he pummeled the Celtics from start to finish — Hield’s offensive production was the primary reason why Sacramento eventually grabbed a 13-point first-half lead and a key catalyst for the Kings’ late-game execution. In the end, he set the stage.

When the Kings clung onto a one-point advantage twice before the final 1-minute mark, it was Hield’s 5-2 run that kept the Kings ahead just before Kemba Walker found Daniel Theis for a go-ahead dunk, but Sacramento continued to fight back. Smart, who fought for an offensive rebound with Richaun Holmes, was whistled for a loose-ball foul that sent Holmes to the line — where he netted a pair of free-throws to put the Kings ahead with only 13.3 seconds left.

Walker eventually got the ball to Smart, who blew past his defender from the top of the key, was able to create enough space for a final attempt off a one-handed floater that fell off the cylinder in the final seconds.

Hield drained 14-of-24 from the floor, including 7-of-12 from deep to go with his six rebounds and four steals while also stealing the show from a Celtics team that was on pace to make history. If the Celtics managed to stretch their winning streak, it would have marked the first time an NBA team had ever rattled off 11 consecutive wins after losing a season opener.

Boston countered Sacramento with a well-balanced offensive attack led by Jaylen Brown (18 points) and Kemba Walker (15 points) and four other Celtics players who scored in double figures. The Celtics erased their double-digit deficit but couldn’t grab a significant lead down the stretch, even after ‘fourth-quarter takeover Kemba’ came in doses in the third frame but never fully materialized when it mattered most.

After pouring in eight points after halftime, Walker went scoreless in the final frame while Brown and Jayson Tatum combined for 3-of-10 from the floor in the opening 10:30. The trio’s offensive shortcomings opened up a window of opportunity for the Kings, one that Hield took full advantage of.

“There were a lot of controllables that we missed but they had to also make some incredible shots,” Brad Stevens said after the loss. “So I think it was a mixture of those two and we’ll get to work from a film standpoint on those controllables and hopefully be better in those scenarios tomorrow.” (Masslive.com)

One of those controllables for the Celtics was taking care of the basketball. After coming into Sacramento leading the league in fewest turnovers (11.7), Boston committed 12 of them in the first half alone — which opened up chances for the Kings to hang around throughout the game.

“We’ve started off bad the last few games,” Brown said. “That ball was just sitting on the rim and we didn’t deserve it, so it didn’t go in.” (Masslive.com)

Celtics will travel to Phoenix for the second half of their back-to-back set against the Suns on Monday, where they’ll look to improve to 2-1 three games into their five-game road trip.