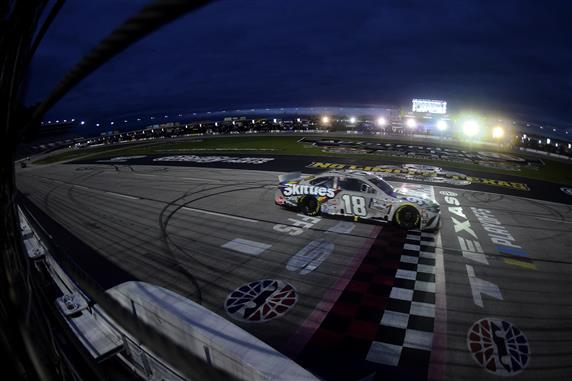 Kyle Busch won the Autotrader EchoPark 500 from Texas Motor Speedway on Wednesday afternoon to pick up his first win of 2020.

Busch had to wait a few days to pick up his first victory of the year, as a consistent mist stayed in the Fort Worth area for three days.  The race began on Sunday afternoon, but was red-flagged after just 51 laps, and did not resume until Wednesday afternoon.

Busch used pit strategy to get to the front, and he was able to use fuel mileage to get the victory.  After pitting before the rest of the field, Busch had to save fuel over the final 60-lap run.  He was able to save enough to hold off his teammate Martin Truex Jr. in the closing laps.

Busch said he had to work hard over the final run to keep his fuel mileage right on the numbers.

“Kept getting great leadership and mentoring from [Crew Chief Adam Stevens],” Busch said.  “Just kept talking to me, reminding me about saving and being able to do what I could.  Trying to stay in the draft as much as I could on the straightaways.”

Busch, who was eliminated from the Playoffs at the end of the last round, extended his streak of consecutive years with a victory to 16 with his win on Wednesday.

Busch said he believes his team is set up to contend again next year.

“This one means a lot just to keep the 16 going,” Busch said.  “Everyone thought we were duds, but we don’t give up.  We’re ready to fight next year; we’ll be back.”

Truex came into Texas needing a win to advance to the final round of the Playoffs, but came up one spot short.

Now Truex has one more chance to race for a championship at Phoenix, and he said he believes he can contend at Martinsville to lock himself in.

“Excited about Martinsville; I know we can win there,” Truex said.  “Seems like one of those years where we’re just second, third, fourth…we’re right there a lot, but we just needed a little bit more to be better.”