Bengals have shown the talent but will they display the consistency to reach the playoffs? 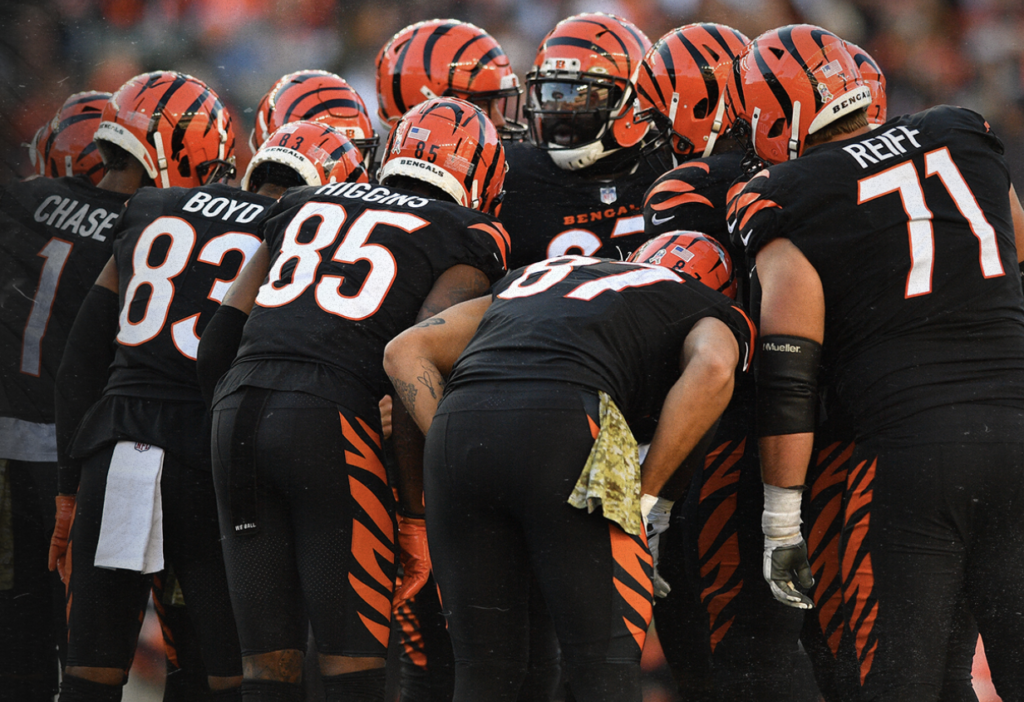 CINCINNATI – As the Bengals continue to sit back on their couches, throw birthday parties for their 2-year-olds (Rocky Reader) and presumably catch up on The Squid Game and the re-boot of Dexter, it’s a good time to consider the viability of the Bengals as a playoff contender.

The messaging has been clear from Jungleland. No panic. It’s all in front of us. We have the talent. Everyone is together. We’re a band of brothers. Just take it from Joe Burrow and D.J. Reader, who’s spending the weekend throwing a Shrek birthday party for his two-year-old son, Rocky.

“We’ve got tough, resilient guys,” Burrow said after the 41-16 loss to Cleveland. “Everything is still in front of us.”

The Bengals have eight games left, seven against the AFC. Five of the eight are at Paul Brown Stadium, which won’t mean a thing if they come close to repeating the performance level last Sunday.

“We have a bunch of AFC opponents left,” added Reader. “Everything we want is right in front of us. Everybody we play is in our division. Everybody that’s sitting at 5-4 with us, we have to play all of those people. It’s an exciting feeling.

When Reader and the Bengals return for their final eight games of the 2021 regular season it’s clear that the outcome could easily go one of two ways:

They reclaim their mojo from the first seven weeks when they went 5-2, beat Pittsburgh and Baltimore on the road and return to the defensive form that had them in the top 10 in most critical areas.

They continue their slide to oblivion and miss the playoffs for the third straight year under Zac Taylor and sixth straight overall.

So, I respectfully submit:

Leadership remains calm in rough waters: Perhaps the only silver lining after the 41-16 butt whooping laid on by the Browns before the bye was the post-game press conference given by C.J. Uzomah and the tone of calm he projected. That is precisely the leadership that will see the Bengals through their 67 minutes to forget from the end of the Jets game through the debacle at PBS against Cleveland. If the locker room remains solid, the ship will sail into open waters and regain its bearings. The belief is that this locker room is much more stable now than the previous three seasons. Two straight losses? As Burrow said after Cleveland, it’s not a big deal. Teams lose two in a row all the time and bounce back. The Bengals feel their bounce back starts in Vegas.

Joe Burrow cleans up his poor decisions, discovers his running backs/tight ends: If there’s one criticism to throw Burrow’s way it’s the fact that he hasn’t checked down enough to his running backs or throw release routes to his tight ends enough. We saw glimpses of that on the opening drive against Cleveland before he forced a ball to Ja’Marr Chase that was taken to the house by Denzel Ward. Chase is going to make big plays, no question. But it’s on Burrow to get Tyler Boyd, Joe Mixon and Uzomah more involved. And it’s on Zac Taylor and Brian Callahan to start using rookie Chris Evans like the weapon he is. The Bengals have one of the most dynamic offensive rosters in football. They need to use all of it to return to the postseason. While the Bengals red zone is decent at 66.7 percent, their third-down conversion is not. With the weapons at his disposal, there’s no reason the Bengals should be converting only 38 percent of their chances on third down. Also no reason for Joe Burrow to be throwing a pick at an alarming 3.79 percent of the time. Only the Jets and Bears are worse in the NFL. Burrow has carried the Bengals offense but he could afford to clean up his looks when receivers are covered. He has 20 touchdowns and 11 interceptions this season.

TD No. 2️⃣ for @Joe_MainMixon.

Defense returns to form: This defense has proven stout up front with D.J. Reader and Larry Ogunjobi doing yeoman’s work in the trenches. The Bengals have been one of the hardest teams in football to run against inside the tackles. The perimeter of the defensive line is where the Bengals have shown some vulnerability, such as the 70-yard house job by Nick Chubb. They’ve got to clean that up like they did early in the season and the secondary needs to shore up. They didn’t get good news when Chidobe Awuzie landed on COVID-19 IR this week, but the hope is he returns in time for Vegas. If he doesn’t, you’re looking at Eli Apple and Vernon Hargreaves as your starting corners against Derek Carr. This team needs Awuzie and dare we say Trae Waynes healthy for the final six to seven games if they’re going to hold up on the back end.

Offensive line: This group simply must improve. Joe Burrow has been hit way too much (five sacks 12 hits vs. Browns). Yes, Zac Taylor said he thought the offensive line played very well against the Browns early on, but fact is they weren’t able to sustain their work in the first two drives over the course of 60 minutes. Burrow, who also must do a better job of protecting himself, has been able to work around the biggest weakness on the team all season. He’s made big plays thanks to his ability to slide in the pocket and run outside. But teams have too often sensed blood in the waters in the interior line, getting past center Trey Hopkins (who has performed nobly in returning from an ACL tear) and the revolving door that is right guard. Maybe they’ve finally found something in Hakeem Adeniji, the fourth different starter to start at the position in the loss to the Browns. Jonah Williams was excellent against Myles Garrett, suffering only a few losses, which is completely understandable against an elite edge rusher. Riley Reiff has been, for the most part, very respectable on the right side and has been a people mover in the run game. Quinton Spain has been as effective as Williams this year and is deserving of a contract extension.

Joe Mixon started out the first couple of weeks looking like the bell cow the Bengals need to run the ball when the weather turns. But whether it’s been score or game situation or play calling, the Bengals simply haven’t been able to dictate runs and their only consistency in the ground game comes when Mixon delays and runs back door on zone blocking schemes. Hat-to-hat, the Bengals have not been able to generate enough forward momentum to eat up clock and truly scare defenses with play-action. In wins against the Steelers, Lions and Ravens, the Bengals were able to run when they established two-score leads.

The secondary has been able to hold its own when Trae Waynes tries to get healthy, and Eli Apple tries to adjust. Jessie Bates III has statistically not been as strong this year per Pro Football Focus in coverage but the combo of Bates and Vonn Bell is still one of the better safety combos in the league. Chidobe Awuzie has been their MVP on the back end, grading out as one of the five best on the Bengals roster through nine weeks. The Bengals have their fingers crossed that his time on the COVID IR is limited to just the bye week. The linebackers struggled in losses to the Jets and Browns in terms of tracking running backs and tight ends and finishing tackles. The tackling, a strength early in the season, has dipped in the last two games. The loss of Akeem Davis-Gaither to a foot injury doesn’t help matters. Germaine Pratt has been taken off the field a couple of times when he gets lost trying to drop in coverage. Despite his best efforts, Logan Wilson can’t be everywhere. Waiver pickup from Carolina Clay Johnston will get his chance.

Honorable mention: The coaching staff needs to be creative and selectively aggressive down the stretch. Taylor needs to show everyone – most importantly his players – that he is coaching to get this team to the playoffs, not to avoid losing games. The players have had his back from the start of training camp as Taylor has worked towards a more accountable locker room. It’s time for Taylor to win two or three games down the stretch based on shrewd coaching moves.

It’s been quite the year for the ladies of the Blackburn household. Elizabeth finally convinced grandpa to start a long overdue tradition and institute a “Ring of Honor” at Paul Brown Stadium. She also heralded the start of the #RuleTheJungle era where there’s a new expectation to compete for championships and establish a winning culture among players, coaches, staff and yes, fans. It’s all about the messaging and that messaging has been well received so far.

And this week, Elizabeth’s mom Katie, a long-respected negotiator in the organization, became the first woman appointed to the NFL’s competition committee.

Blackburn, the executive vice president of the Bengals, is the franchise’s fourth member of the committee. Team founder Paul Brown, his son and current owner Mike Brown, and former Bengals coach Marvin Lewis also have served on the group that makes recommendations on rules and points of emphasis to the 32 club owners.

“I don’t speak for the commissioner and his appointment of committee assignments,” said committee chairman Rick McKay, president of the Atlanta Falcons, “but I must say it seems appropriate that Katie Blackburn would be the first woman appointed to the competition committee. With her grandfather coach Paul Brown and her dad Mike Brown being long-time and important members, Katie is now a third-generation member of the committee.”

The powerful committee is involved in rule changes and revisions to league bylaws.