Byron Wins at Daytona as the Playoff Field is Set 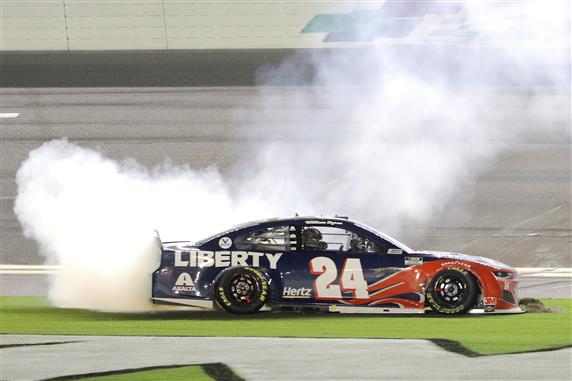 Byron came into the weekend needing a strong finish as he was on the bubble with Matt DiBenedetto and Jimmie Johnson for the final two spots in the Playoffs.  After Johnson was caught up in a late wreck, Byron and DiBenedetto were all but locked in, allowing Byron to focus on the winning moves needed at the end of the race.

Byron found his way to the lead on the final restart, and his teammate Chase Elliott was able to push Byron to the victory and into the Playoffs.

Byron said he was focused on points throughout the race after struggling to pick up stage points early.

“Probably the hardest track to points race,” Byron said.  “We didn’t have a great Stage 2, kind of got back in the pack and got shuffled when everyone went single-file.”

Byron used a late push from Bubba Wallace to get to the front right as Joey Logano got sideways, sparking the accident that collected Johnson.

Byron said he was going for his first career win and a Playoff berth no matter what.

“[Logano and Wallace] made some contact and opened up a hole for me,” Byron said.  “I wasn’t going to lift.  It’s awesome.”

DiBenedetto was the final driver to transfer into the Playoffs, and beat Johnson by six points for the final spot.

DiBenedetto said he was excited to move on and have a shot at the Cup Series Championship.

“We made it, I don’t care how we did it,” DiBenedetto said.  “My goal was to come in here and make it and we had some pretty good competitors, obviously.”

“We’ll celebrate tomorrow and have a good day, then it’s going to be time to get to work.”

DiBenedetto, in his first season with Wood Brothers Racing, said his previous seasons of driving for under-funded teams helped prepare him for the pressure this weekend.

“That was the most stressful situation inside a race car I’ve ever been in my life, hands down,” DiBenedetto said.  “I was calm going into the week, and I really think I have to thank my career path for kind of grooming me for this type of situation.”

“It’s been a tough fight, and it makes me so appreciative of these situations.”

Johnson’s team was able to get his car back on track following his accident, but he fell six points shy of making the Playoffs in his final season.

Johnson said the focus now turns trying to get one final win in the 10 remaining races.

“There’s 10 races left; 10 races to go chase and we’ll have to focus our efforts there,” Johnson said.  “Last three years have been tough, we all know that.  I think we’ve shown some bright spots…Cliff Daniels and these guys on this team have poured their guts out for me.”

“We did all that we could this year; I am so thankful for Hendrick Motorsports and the career that I’ve had here.  I’m not going to dwell on it too much, I don’t know what I could have done differently.”